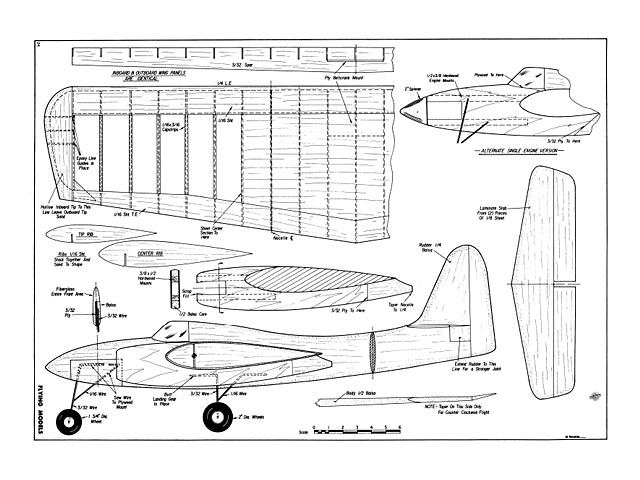 The F7F has been a popular scale ship for quite some time and is often seen at contests. A few years ago the late Ray Randle even enjoyed considerable success with a carrier version, which really doesn't prove much as far as these ramblings are concerned, except that as a model the Tigercat has proven to be popular and versatile. I have always admired the lines of the plane and after a few quick checks on areas and moment arms I decided to contribute a little more to the versatility of this fine subject, thus this profile stunt/sport version presented here was developed.

Two standard Fox .15Xs were chosen for power. They were both modified slightly by the addition of exhaust restrictors, however if you have two R/C .15s or .19s they will save you a little time and probably give better idling. The engines as described, with only the exhaust restrictors, can be slowed sufficiently to allow beautiful power on landings, taxi, and take-off patterns.

As the wing is the central component of the model, it should be constructed first. The tapered ribs are easily fabricated by the fairly standard means of bolting blank rib sheets between the center and tip rib templates. These are then carved and sanded to shape. The ribs may be notched quickly by pulling three hack saw blades through them. To lessen the blade's tendency to tear the balsa, pull the blades through in the direction of the set of the teeth, allowing the weight of the blades to determine the feed. The main spar and leading edge should be notched in the same manner except that two blades are used. If you do not choose to make the notches by this method, be sure to cut the notches accurately, or else you will end up with excessive dihedral and warps caused by the shrinking action of the cement on the over sized slots.

Once the ribs and spar are notched they can be assembled, alignment is most. easily obtained by adding the notched leading edge, the trailing edge sheeting should be glued in place at this time also. The wing should be visually checked for warps and hung up to dry, check periodically for the next few hours to make sure that no warps occur..." 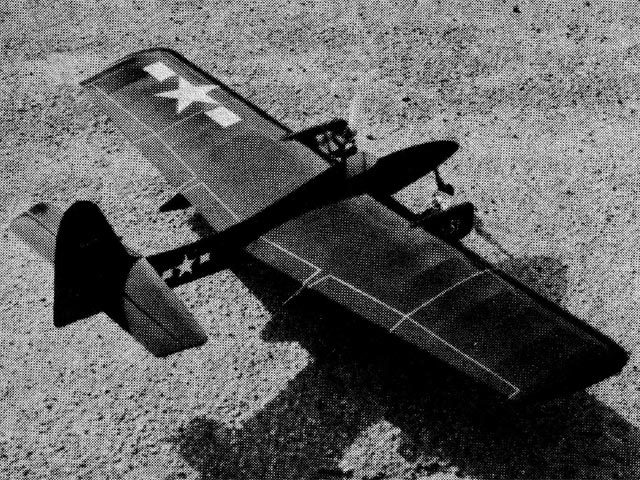