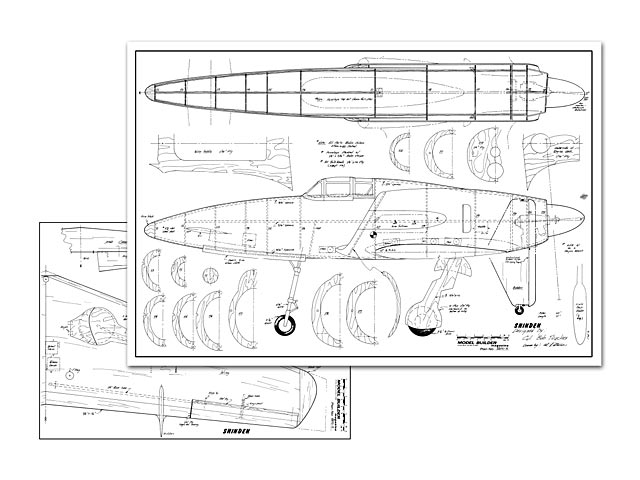 Quote: "The Shinden never made it as a production line fighter in WWII - the end of the war came before the bugs could be worked out of the design. Leave it to the colonel to do that 40 years later! Kyushu Shiden J7W-1, by Bob Thacker.

In WW-II, the Japanese were well aware that their continued success and high superiority with their Zero fighter would not continue, particularly when the P-38s and the US Navy's Hellcats and Wildcats started to achieve high kill rates in the middle of 1942 and 1943. They immediately started to design and develop the Shinden, which means 'magic lightning.' This aircraft was to be a state-of-the-art fighter to handle all of the allied and enemy interceptors, plus take on the B-29 long range, high altitude bomber they knew would be encountered over their homeland.

The initial development of the aircraft was started in 1942; a two-place, man carrying model was built to test the theories and concepts of the canard. It was to be a navy fighter. and research indicates there was a German engineer as co-designer of this extraordinary airplane. The engineer's name was Franz Pohl.

The airplane had experienced only three initial test flights as of the last week of the war in August 1945. In each test flight, the duration was only ten minutes. Your author, having been in the test pilot business, assures you that a ten-minute test flight is a: My God, let's get this thing on the ground! The Shinden's problems were: excessive torque reaction because of the six-bladed propeller, the oil temperatures were running above the red line on each flight, and the pilot could not trim the aircraft to fly to the left (it could only fly to the right because of the excessive torque). Initially, the Shinden's canard incidence was one degree, and it took full back stick to keep the aircraft straight and level. These were just some of the problems. They never did get the gear up on any of the three test flights. Corrections were underway, but the end of hostilities stopped all work. We liberated the only Shinden built, and it is now in the Smithsonian Institute in Washington DC.

What I really achieved with this project was the satisfaction, the excitement, the thrills, and some of the tragedies of successfully completing the flight test program of the Shinden by radio control drone forty years after the end of the war. The excitement and some of the problems will be fully covered in the flight test program of the model itself.

I like to start my projects with the construction of the wing because it's the easiest component of the aircraft to build and it gets me going. Besides, we must have it to make the fuselage wing saddle. We decided to use foam core construction (have your foam wings cut commercially). You will see the center and tip rib patterns to be used on the plans. When you have them cut, make sure there are three degrees of washout in each wing panel to assist against tip stall.

The only recommendation I can make is if you are not familiar with foam core wings and balsa covering. RCM magazine has a pamphlet on techniques to be used. I used an epoxy to put the skins on, and I'm not too satisfied with the results. I think a good magic tape (sticky on both sides) would work out, or you can use the conventional contact cement method. Either one would do. Make sure that your torque rods are at least 1/4-inch diameter aluminum tubing. If you use a thin wire for a torque rod, you're going to have aileron flutter. I used B&D pneumatic retracts. (B&D Company makes a very fine box that the gear sits into, and I highly recommend its use.) Make sure that you put 1/8-inch plywood reinforcements on each end of the box so that you will have a good. solid bearing for the box between the foam core and the sheeting itself.

While we're at it, let's talk wheel well door covers. In order for those wheel well doors to fit perfectly, laminate them from two sheets of 1/32 ply. Form them right over your wheel well door area before you make the cutouts. Epoxy both sheets together and tape them to the wings. When they're cured, you will have a perfect door. For the nose gear covers, use six layers of six-ounce cloth.

As long as we're talking about wings, we might as well discuss the canard, which is also a wing. (That's where you get some of your increased performance: both flying surfaces of a canard design are lifting surfaces.) The canard wing is made out of balsa..." 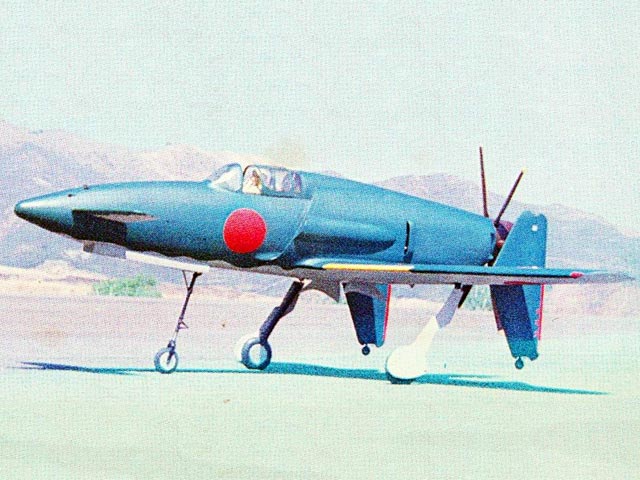 I tend to like Japanese WW2 warbirds, most have very pleasant curves. This one does as well, even if her 'pleasant curves' meant no surety of success. But anyway where else can you find a single-engine fighter with five wheels?
The designer Col Bob Thacker looks a bit daffy in his Japanese Freemason kimono but make no mistake! The plan itself is very sensible, a pity we don't have more from him here in OZ. If you intend to build the Magnificent Lightning - that's what the name means and is justification enough for the entire project! - do read the article carefully if you want to avoid the terrible experiences both original and model went under.
Miguel - 30/03/2021
Add a comment