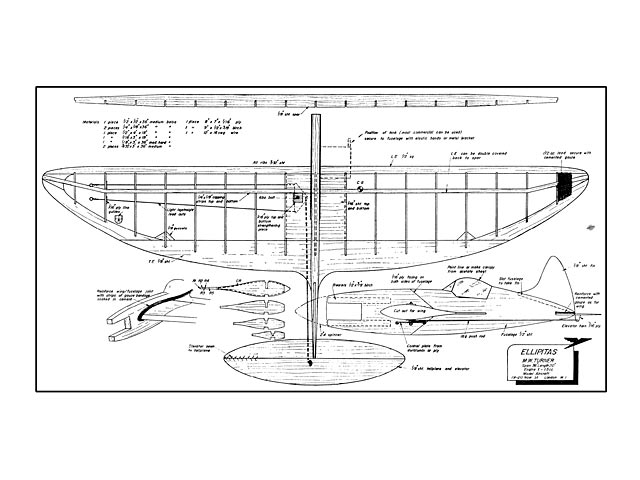 Quote: "Something quite different in control-line trainers that is shapely, yet easy to build and will take a lot of punishment in the hands of a novice.

IN designing Ellipitas I wanted a reasonably good looking model which was inexpensive to construct and could be produced quickly, as like most modellers, both my pocket and building time are limited! The design was primarily intended as a Club stunt trainer for the Medway Model Flying Club, and as such it had to be of strong construction and capable of taking hard knocks from our budding stunt pilots!

The model can be completely finished in three evenings, for a cash outlay of about 14s, yet despite this basic simplicity, the design has a certain finesse about it, often lacking in some of the quick to build 'squared off' stunt/combat designs usually seen.

Begin construction by cutting the fuselage outline to shape and then round off all the corners, Cut the slots for the engine bearers after trimming the bearers to length, and then cement them to the fuselage, facing forward part with 1/16 ply. Now cut the slots to take the tailplane and fin, both of which should be a tight fit. Finally, cut out the middle of the fuselage to take the wing.

Construction of the wing is quite straightforward provided the following sequence is observed. The three trailing edge pieces arc cut out slotted to take the ribs and cemented together; the shaped leading edge is then trimmed to length and slotted for the ribs; the leading and trailing edges are then cemented together at the tips and the ribs cemented in the leading and trailing edge slots. If slots have been cut accurately the ribs will automatically line up. The full depth naainspar is cut from 1/8 sheet, slotted to take the ribs and cemented in position. The capping strips and centre section sheeting are then added.

When the wing assembly is complete, it is pushed through the fuselage, carefully centralised and securely cemented. The wing/fuselage joint is afterwards reinforced with gauze bandage to form a good fillet. The plywood bell-crank supports are now cemented on to the wing centre section, and the bellcrank bolt is screwed right through the wing.

The wing is covered with heavy-weight Modelspan and the remainder of the model with lightweight Modelspan. When covering the wing it is best to use cement to attach the covering to the rear (concave) portion of each rib, otherwise the tissue will not adhere to the rib contour.

By the way, I have found that a very lightweight multicoloured finish can be applied to the wing by using ordinary water colour paints before doping. Although the finish is not so brilliant as a colour doped surface, the water paint shows up quite brightly when clear doped and fuel proofed." 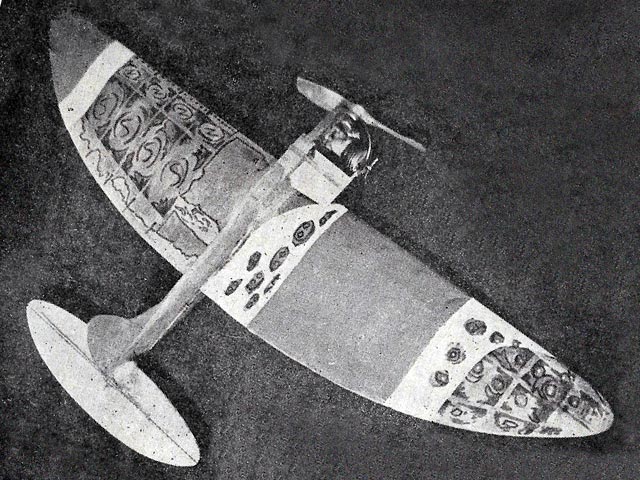