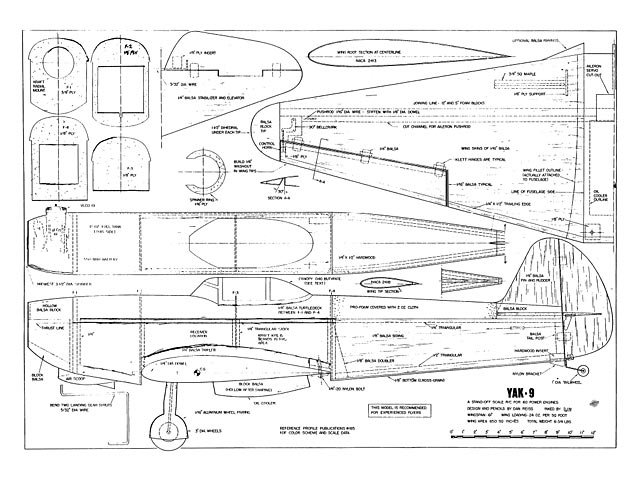 Quote: "The Russian World War II fighter, the Yak 9, is far from a well known airplane even among airplane buffs. Although probably over 15,000 were built when it entered service around 1943, I still get quite a few "What's that?" at the field with mine.

Mr Yakovlev must have been thinking about R/C models when he designed his plane because she's a natural for a semi-scale model. The ample tail surface, straight tapered wings, flat sided fuselage and a very uncomplicated turtle deck all tend to make life easy for a modeler who wants a nice looking ship to fly on any Sunday. You don't have to save this one for that once-a-year scale contest. She's built strong and simple and is meant for flying.

Although its performance standards aren't up to the pattern ships, you won't be disappointed with them, especially after you receive all those raves at the field. She's not a beginner's airplane, but then most semi-scales aren't. The Yak's flying characteristics are relatively mild and I don't hesitate to recommend it to anyone who has some flying time under their belt.

Start with the wing first. Mine was made of foam, however if you want to build yours up, use the root and tip templates to make the rest of the ribs..."

Update 26/05/2016: Replaced this plan with a re-scaled version at fullsize, thanks to Spitfireflyby. 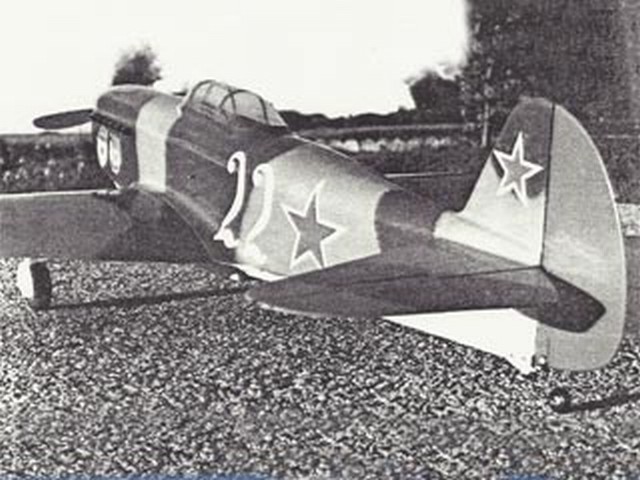 Could you confirm the scale of this plan? My software indicate about 25 inches instead 61 inches for the wing span. Please don't think that only a half wing appears. I have multiplied by 2 this half wing. Thank you and keep it up.
spitfireflyby - 26/05/2016
You're right, the scale was wrong. Steve has updated the plan, so it should be correct now if you want to download the latest copy. Thanks again! Mary
Mary - 26/05/2016
Add a comment