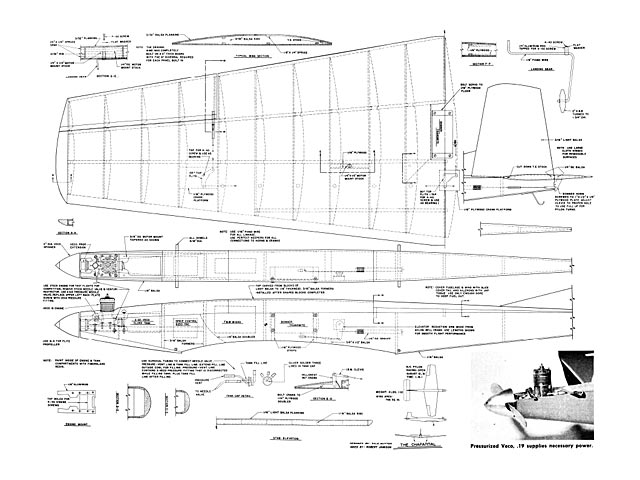 Consider, for a minute, the events presently included at R/C contests and ask yourself these questions:

The answer to these questions is R/C pylon racing. With all these advantages, you might wonder why pylon racing hasn't become a more popular event since it was introduced several years ago. The answer to this question can be given in two parts.

First, open pylon racing has been and continues to be a popular event in local competition. Most of the multi contestants enjoy flying the pylon course with their stunt ships and competition between them results in close times because of their similar power, weight and size.

Second, the present AMA rules for pylon are rather awkward, requiring a plane which departs considerably from conventional multi stunt plane design. This year, in the Southwest, the event which was thoroughly enjoyed by contestants and contest officials was Open Pylon. Entries in Open Pylon usually equalled those in Multi. Most contestants traveling to the meets could enter both events with the same plane. More than 90% of the flights made in Southwest contests were either multi or open pylon flights. Open pylon is set up with AMA course and offi-cials. There are no wing area or engine size restrictions. The average multi flier can fly the AMA pylon course with a time of 1:30 to 1:40 with his stunt plane. Of course, any flights made with planes meeting AMA pylon regulations can be submitted for the record in a sanctioned meet. An AMA pylon ship is capable of flying the course in 1:15 to 1:25. The original Chaparral has won all four contests entered in Open Pylon competition in the Southwest. For this reason, there is no need to hold pylon events restricted to AMA pylon only.

If unfavorable wind or field take-off areas exist, the race can be held with a flying start. Such a contest could not be recognized for record purposes.

In national competition, AMA Pylon should be held separately to allow more time for planes meeting AMA rules. There is no problem, as we all know, in getting enough contestants to enter RC events at the nationals. If sufficient interest is developed in some areas, RC pylon and speed events and AMA pylon record trials can be held. The Fast Club of Los Angeles, has held these type of meets successfully for the past two years. Pylon fliers in the Southwest plan to hold record trials throughout the year, hoping to keep the AMA record in their area.

To compete in AMA pylon, a plane which departs from conventional design is required. The unusually large wing area now specified in the AMA pylon rules tends to make the planes either very sluggish with weight or extremely sensitive to air turbulence with light models. The basic design features evident in all successful pylon designs are:

Several other design features are included in the Chaparral. Consider, for a moment, how a true pylon turn is made. The plane is rolled 90° (to a vertical bank), then the turn is made as tight as is practical by applying up elevator. Then, after the desired change of direction is accomplished, the plane is rolled back to level (horizontal wings) flight. Since a pylon turn is the only maneuver required, the Chaparral was designed with only aileron and elevator controls. It should be pointed out that increasing yaw stability improves roll characteristics by tending to minimize roll induced yawing tendencies. However, if the rudder is too large, or too tall, the plane will be spirally unstable. The Chaparral was designed with a fairly large rudder with a dorsal fin for this reason. The dorsal fin makes the rudder more effective, without making the plane spirally unstable. Considerable strength is added to the fuselage by using a dorsal fin.

To reduce drag, wing and tail pitching moments and angles of attack must be minimized. Since the wing loading on a AMA pylon ship is very low, the lift of most airfoils at or near 00 is sufficient to support the plane. Pitching moments can be minimized by attempting to make the Center of Lift, CL; the Center of Gravity, CG; and the composite Center of Drag, CD coincide on the thrust line. If a wing has dihedral, then its CL must lie somewhere above the root chord. Thus, the CG, CD; and thrust line must also be above the wing. The Chaparral is designed with the thrust line 2-1/4 in above and parallel to the root chord of the wing. The stabilizer is at 0° incidence. The wing has 6° dihedral in each panel. The result is a plane which can be flown in either a slightly climbing stable trim, or neutrally stable trim. With neutrally stable trim, the plane will maintain any pitch or roll attitude until a control command is sent. Of course, if a climb becomes too steep, the plane will eventually stall.

The structural design of a winning pylon ship contributes to its success. Since the wing area and engine size are fixed, model weight and drag must be minimized. After observing many wings buckle on earlier pylon designs, including my earlier pylon design and former AMA record holding plane, Rudolph, it was apparent that the structural advantage of a tapered wing would be very desirable in a pylon plane. Since the wing must be about 6% thick, warping also creates problems. For these reasons, a flat bottom, fully sheet covered wing was selected..." 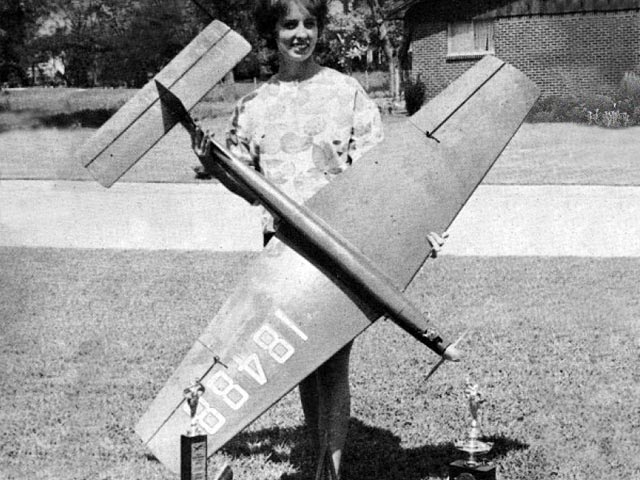