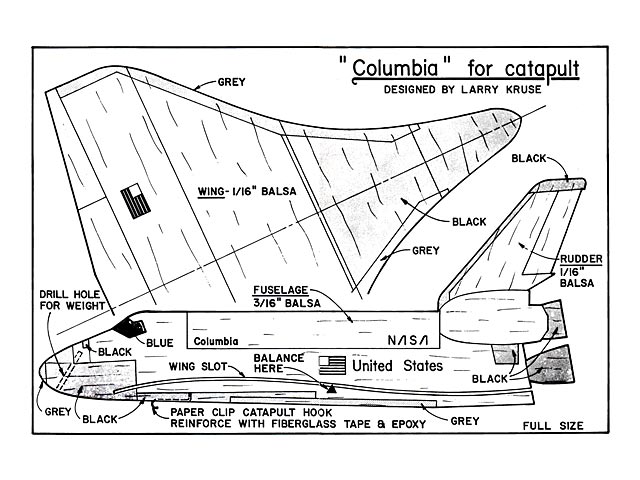 Quote: "Inspired by the saga of the shuttle program, the author's daughters 'subtly' urged him to create this profile balsa version. Columbia Catapult, by Larry Kruse.

Judged from the standpoint of personal interest and national pride, the return of the space shuttle Columbia was one of the most significant and exciting aviation events of our generation. Probably not since the first landing of men on the moon almost two decades ago (can it be that long?) have we shown such enthusiastic interest in things that fly.

The infectious nature of the ungainly stub-winged aircraft's flight in particular affected my children, who, for some unknown magnetic reason, viewed the flight again and again on newscasts and would not be satisfied until I had gone to the drawing board and at least sketched out a reasonable facsimile of the Columbia that they could have for their own.

Since time seemed to be of the essence for them, I opted for a simple catapult glider version of the craft that each of the three girls could fly successfully. It is presented here for the pleasure of children of all ages. I must admit to an exceedingly long flight testing program before I reluctantly turned the model over to Kimberly, Kerri, and Keela.

Construction: All parts can be cut from one 36 inch sheet of 1/16 inch balsa and a scrap piece of 1/16 inch from your wood box. The wing blank was laid up by butt-joining chunks of the 1/16 inch stuff with Goldberg 'Super Jet', cutting out the wing shape carefully, and rounding both the leading and trailing edges. The black de-icer/heat shield boot was done with Magic Marker (as were all other decorations and lettering) after first outlining the areas to be colored with a ball-point pen. The ball-point, sinking into the wood just slightly, will keep the Magic Marker from bleeding by capillary action. All colors needed are shown on the plan.

The fuselage was cut from 3/16 inch scrap and rounded gently for aesthetic purposes. Be very careful to hold the modeling knife vertically when cutting out the wing slot. The wing/fuselage juncture must be at 900 for the ship to perform well. Carefully drill a hole to accept the lead shot noseweight. Again, all markings were done with Magic Markers as indicated on the plan.

To assemble the shuttle, slip the wing into the 'S' shaped wing slot and 'Super Jet' it in place. Pin and glue the rudder in place atop the fuselage, making sure it is 90° to the wing and not 'aimed' either to the right or the left. The catapult hook is made from a paper clip and epoxied to the fuselage. It's probably best to saturate a small piece of fiberglass tape with epoxy and place it over the catapult hook area, too. The last thing we want to have happen is for the hook to become some sort of lethal weapon should it come loose under tension of the catapult rubber. Also, along those same lines, young modelers flying a catapult glider like the Columbia should be cautioned against aiming it at anyone. The little shuttle leaves the launch pad at a pretty good velocity and could cause injury to eyes or other vulnerable parts of the body.

Flying The finished Columbia should be balanced as shown with lead shot pressed into the drilled-out cavity in the nose. A bit of modeling clay can also be used to 'fine tune' the flight path at the flying field.

Begin flights by test-gliding the ship from shoulder height. The delta-wing is a super-stable planform when coupled with the 'S' shaped airfoil shown, and should require only adjustment of the noseweight to get a flat, stable glide. Once the plane is gliding consistently when tossed from shoulder height, try a flight at about half power using a 3/16 inch dowel, 7 inches long as a launcher and an eight inch loop of 3/16 inch or 1/4 inch flat rubber as the propellant.

If the first flights seem safe enough, stretch back the rubber to its capacity and let fly. The prototype was banked sharply to the left at launch. It would then zoom up to about 50 feet at the top of the launch where it continued to glide in a lazy left hand pattern for long satisfying flights." 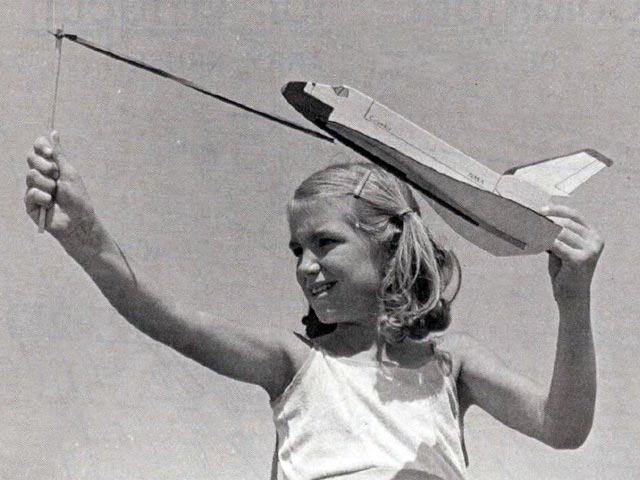