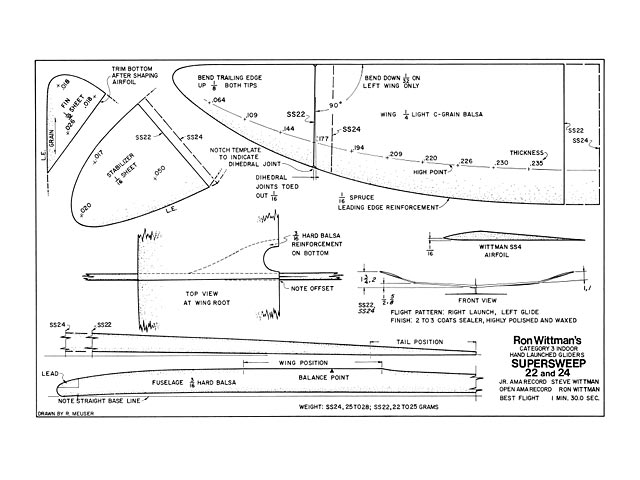 Quote: "A minute and a half with a balsa wood glider? Indoors? Impossible! That seemingly impossible feat has been accomplished. The Supersweep, by Ron Wittman.

On February 18, 1973, flying in the old Marine dirigible hanger at Santa Ana, Ron Wittman made flights of 90.0 sec and 88.7 sec - the best two flights in the series of nine - to establish an of-ficial AMA National Record for indoor Hand-Launched Gliders, Category III (unlimited ceiling height).

A couple of lucky flights perhaps, made under ideal conditions? Hardly! Rather, during a year of intensive effort (backed by nearly two decades of previous glider experience) Ron inched his way toward the record with a series of increasingly successful designs. Ron made 90 sec twice, dozens of flights over 85 sec, and only rarely a flight under 80 sec. And the conditions? The worst imaginable! If the launching was the slightest bit off, a collision with a parked helicopter was inevitable.

At the 1973 NATS, flying a light straight-dihedral version of the SS22, Bucky Servaites won the IHLG event in Open Class. And while we were polishing up this story, Ron's 11-year-old son, Steve, who looks scarcely big enough to carry a 22 in glider, let alone throw one, established a Junior National Record with a two-flight total of 127.2 sec. That should permanently lay to rest the myth that small people should fly small gliders.

Ron's record was set with the SS22. However, he has actually surpassed his record by a half second using a 24 in span version. While the difference in flight times is not significant, Ron feels that the Supersweep 24 has more potential than the SS22, and is currently flying only the 24. The plans are basically those for the 22, but the minor modifications required to stretch it to the 24 are also indicated.

The Supersweep incorporates distinctive design features that might be applied to any design to advantage. The most noteworthy features of the design are the airfoil section, the high aspect ratio pointed-tip wing planform, the manner in which the thickness tapers toward the paper-thin tips, and the severe washout in the wingtips.

The design of the glider, however, is only one of many factors required for success in IHLG. Other important factors include: the construction and finish, proper trimming and adjustment, the athletic factors - strength, stamina, and control - that result in a powerful, consistent launch, and a long list of psycholological factors including the will to improve, and the persistence to view failure as merely a temporary set-back..." 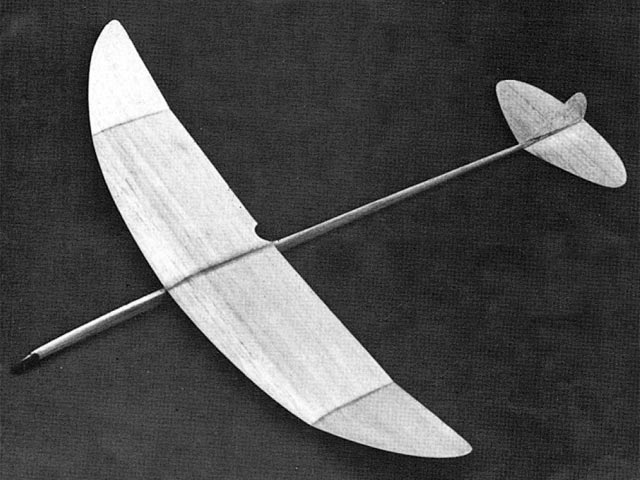