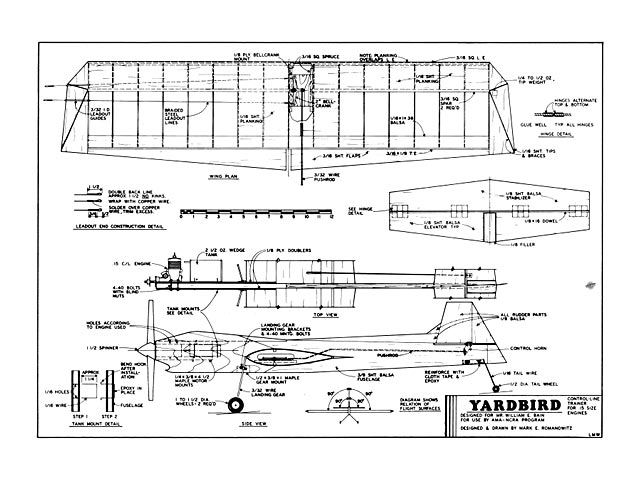 Quote: "The Yard Bird is designed to be an inexpensive, easily-built, control line trainer that can progress with the flier as his, or her, expertise increases. It is capable of a number of acrobatic maneuvers, mostly round ones, including loops, horizontal and vertical eights, etc.

While the model is a definite boon to the newer, less experienced modeler - and can be a lot of fun for ANY ukie flier - it is designed with a very different purpose in mind.

Mark Romanowitz, an architectural major at the University of Kentucky and a member of the X-Cell Model Club of Lexington, created the design at the request of William Bain, Board Chairman of the National Correctional Recreation Association. That's right! - it was originally designed to be built and flown by inmates of penal institutions - and now you know how the 'Yard Bird' got its name.

At the 12th annual conference of the National Correctional Recreation Assn, in 1978, Bill Bain presented the idea of model airplane building and flying as a major leisure-time activity in the correctional setting. Bill received assistance, in his presentation, from noted model fliers in the area. With these people and Larry Bolich, Special Events Director of the Academy of Model Aeronautics, they manned the AMA booth throughout the conference. AMA has continued to work closely with the NCRA during the succeeding 1979 and 1980 conferences. One of the major goals has been to create a national directory of penal institutions willing to develop a modeling program. The directory is now available from both AMA and NCRA.

The idea is to exchange services of chartered AMA clubs, near an institution, in helping to start a model program through the Superintendent of the institution and the Director of Recreation, In return, flying sites are being developed on institutional property, usable by both the AMA 'free world' clubs and the inmate model clubs. In so many areas, model flying sites have become increasingly difficult to obtain. Nearly all correctional institutions have large parcels of land attached outside or the normal security area. Many are in the minimum custody category and nearly all are concerned with good leisure time activities for inmates.

Studies in correctional rehabilitation repeatedly disclose that, eventually, nearly all persons serving sentences are released to the community. The development of creative hobby interests and solid leisure-time activities will generally follow the released inmate, helping to improve his adjustment into the free society.

The Yard Bird was introduced at the 14th annual conference of the NCRA held at Wichita State University at Wichita, Kansas, in September 1980. Using a .15 cubic inch engine, for economy, plus a rugged structure, the design was just what the doctor ordered. Some seventy sets of the plans were distributed to Recreation Directors attending the conference. The ultimate goal of the AMA-NCRA national project was to provide mutal aid between the two agencies to promote model aircraft building and flying.

NCRA, for the past three years, has acted as a 'bridge' between the local detention facility and local AMA chartered clubs. Both have benefited immensely. Many of the institutions have provided flying sites for local clubs, while the clubs have assisted in the institution's modeling programs as well as performing 'air shows' to stimulate interest in modeling among inmates..." 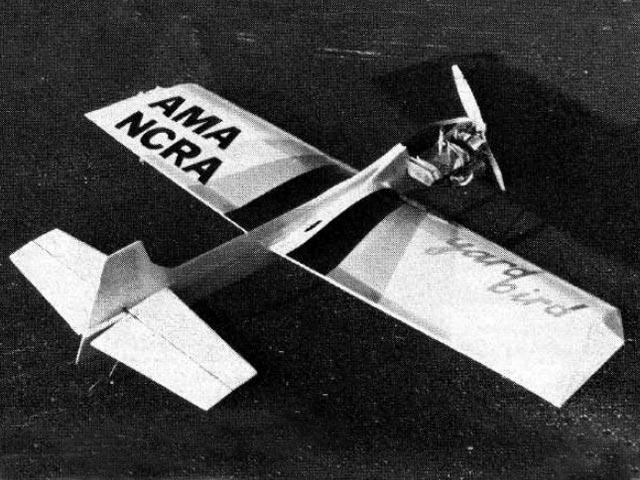 Thanks for posting the Yardbird!
I hope folks enjoy it as much as I did. I taught my sons to fly control line on the original plane. Unfortunately it succumbed to one to many crashes. The original plane was designed to be used without a muffler. With a muffler it will be easier to balance if the nose is shortened about 1/2". Have Fun!
Mark Romanowitz (Designer of the Yardbird)
Mark W. Romanowitz - 07/06/2021
Add a comment