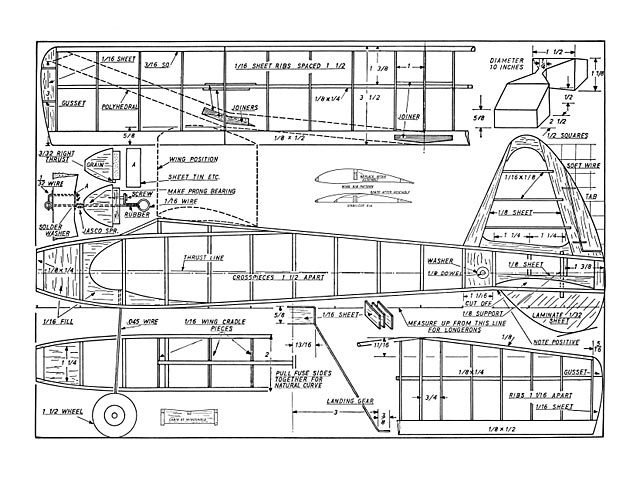 WHY is it that model aviation does not have the equivalent of the basic trainer? If you disregard the sport model, a rather occasional airplane built with no performance specifics in mind, there seems to be nothing but the beginner's model meant for kids who are about to make their first glue joint and, at the other end of the scale, the high performance contest types that only a limited few can handle capably - if at all.

The model basic trainer type is a much needed airplane. Its advantages are almost too many to list. Its main purpose is to permit mistakes without wash-outs or even damage, yet without stripping away the satisfaction of having a machine capable of controlled exciting performance, and not mere flying as with the beginner models. Essentially, this is not a beginner's model; yet any beginner, having made his first powered model, can make the basic trainer without. difficulty, In making it, he will be introduced to many of the small points that mark a rubber contest job. And, while he can learn to fly it properly, to make adjustments to get it to fly better and better, flight after flight, without the proceedings being terminated by a spiral dive which we all make sooner or later, he will be able easily to think ahead of the airplane.

There is no reason either why any flier, expert or otherwise, should be ashamed (who is ashamed of piloting an AT-61?) to take out a miniature Wakefield - for that is what it is. With 10-12 strands of 3/16" rubber it is a bundle of dynamite for its size and can be flown like any contest model in small areas.

Among its features are such good contest-type items as a separate stab and fin, the stab being a unit fixed in place. The fin is an integral part of the fuselage so that it cannot be accidentally moved or in any minute way vary the adjustments. This makes for consistent flying. Wing and tail incidences are built hi, as is downthrust. The rubber attachment and ten-stoning are essential for anyone who really wants to learn how to fly the big duration types.

The fuselage is sturdy, reinforced about the nose, again as any reliable ship must be if it is not to fold up from the banging about of test flying and windy weather landings. A folder was not used because the purpose was not to duplicate all Wakefield features, but to take the tyro up to the point of successfully flying the big models; moreover, a free-wheeler is a step in that direction for it permits reasonable glide.

Structure throughout is on the heavy side, for the elimination of warps is absolutely essential to accurate adjusting. Unclercamber is used since the covering is a bit more difficult than on a flat bottomed section and because undercamber almost always distinguishes the contest types.

Detailed building directions of the put-down-the-wax paper type hardly are necessary for anyone who already had made his first built-up model, so well run through the highlights of this basic trainer.

The fuselage is made of 1/8 square. Use medium, but not hard, wood (your full size Wakefield would use 1/8 to 5/32 square hard balsa with closely spaced crosspieces). The side frames are easily joined at the wing position, after which the rear end is pulled in with a natural curve and the crosspieces added. The nose may be held in with rubber bands while the 1/8 x 1/4 front pieces are installed. Note the sheet construction at the stabilizer position and, as filled in, at the nose and between the front crosspieces. The landing gear is attached to the fuselage by means of a sandwich composed of three plies of 1/16 sheet, one of which should fit between the vertical crosspieces of both fuselage sides.

One essential detail is the direction of grain on the nose plug, This grain should be fore and aft to prevent crushing of the wood about the bearing. This latter can be the cause of mysterious poor flights due to changes in thrust adjustments..." 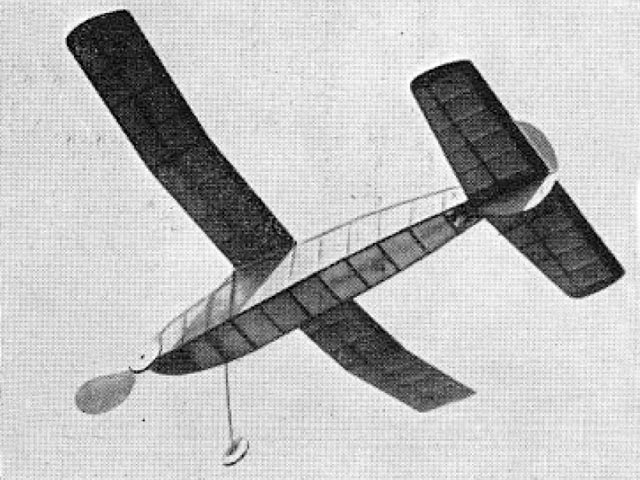