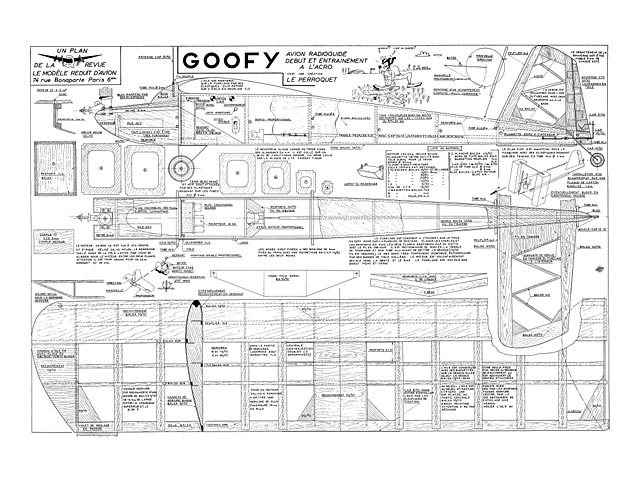 This was a very popular beginner model in France the 60's. Quite crash resistant and versatile, it could be flown rudder-only to multi depending on your ability to purchase equipment. It was designed in 1959-60 following a request by the powers-that-be for a simple, cheap, easy to build radio control model for the masses and did fulfill its purpose very well.

Many were built and flown successfully by rank beginners, and as late as 2007 it was still the standard first radio control model for new recruits of the Club des Cigognes of which Francis Plessier had been the very dynamic president until his untimely death in 1995.

Here are three photographs showing Goofy that I just received from Jean Rousseau, present president of Club des Cigognes. The model on the stand [pic 003] was built by Jean in 1960, his first R/C model. It flew with Galloping Ghost, a Metz Mecatron receiver and a home-built Tube transmitter. The other two [004, 005] are of other rudder-only Goofy's with diesel engine.

Keep up the good work and keep safe,"

Update 24/03/2021: Replaced this plan with correctly scaled version at 45 in wingspan. Doh, my mistake. Many thanks to JMP for checking this. 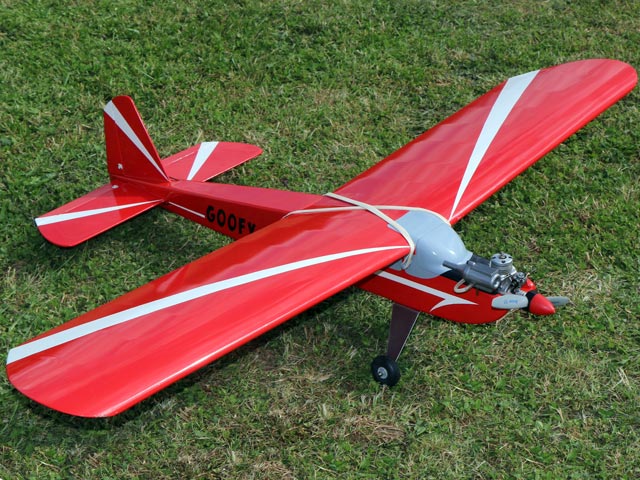 The club in which I am in France, had for president Francis Plessier, the creator of Goofy. Accidentally missing in 1995, we recently paid tribute to him through a vintage encounter and for that I rebuilt a Goofy, powered by a 1970 Super Tiger G20 / 15. The plane looks good and reflects the aesthetic of the time [main pic, 006, 007]. As for the decor, it is quite simply the one that Francis Plessier's planes wore.
Thank you again for what you are doing to safeguard our world aeromodelling heritage. Best regards,
Thierry Bordier - 07/06/2021
Add a comment