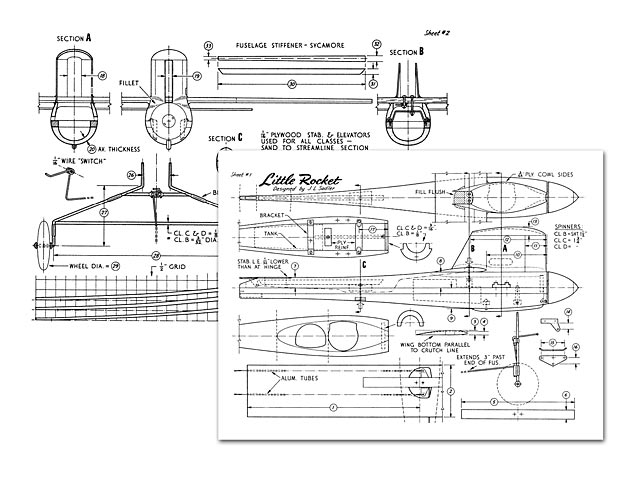 Quote: "THIS 'basic' speed model design is a development covering two years in time, involving scores of similar models, and hundreds of flights. The upshot is a sound, easy-to-fly model, as streamlined as any you will find and tougher than most. On one occasion, one of these models was completely finished in four evenings' work; proof enough that the design is not a complex one. Proportions and areas along with construction features are what our experiments indicate as best.

First glance at the plans will reveal that the plane is expressly designed for the glow plug; fuselage bulk is reduced to the minimum requirements of engine.and fuel tank. Yet the thin, boom-like body has great strength due to full-length sycamore crutches. We favor sycamore for certain parts because of its toughness, its resistance to splitting; and its uniform grain.

The average model builder is a pretty intelligent chap and we acknowledge this in presenting something un-usual in plans: a typical set of drawings and a reference table of dimensions from which he can easily make his own working plans for a class B, C, or D speed model. The models are closely related though not so identical as to permit photographic enlargements or reductions to be used. You will detect what may appear to be differences when scaling up the various model sizes. Stick to dimensions, however, and be guided by the general arrangement of the drawing presented.

Start off with a large sheet of wrapping paper, a pencil and ruler. Lay off center lines, measure off the dimensions and sketch in the outlines. Develop the side view, using parts of it as patterns for upper and lower body block side outlines and cowl parts. Plot the top view next, using it for top views of body blocks and cowl top. Draw up a grid of 1/2 inch squares and plot the crutch pattern from the original drawing. Other parts, such as wing, tail, landing gear, are easy to enlarge.

Bandsaw the lower body block and the crutches to outline and prepare a small quantity of Cascamite glue for joining them. Caution: model cement is not a satisfactory substitute here. Before gluing, however, drill the engine bolt holes and mount the bolts from the bottom, soldering the heads against a brass strip tacked beneath each crutch. Gouge out the lower block to dear the crankcase and bolt the engine to the crutches - to space them properly - when gluing the lower block to them: Use 'C' clamps and dry glue overnight.

Later the top body block is spot-cemented in place and the spinner backplate is drawn around with a pencil to guide the carving around the nose. Shave away excess material, rasp and sand the body smoothly. Separate the halves and hollow them with a curved gouge. Make a cut-out to permit the top to fit over the cylinder and another to coincide with the bellcrank hole in the wing. Refer to the plans for establishing the exact positions and settings of wing and tail. At this stage the brass tubes may be mounted, into which the drop-off gear prongs fit. Note the hardwood reinforcement across the bottom..." 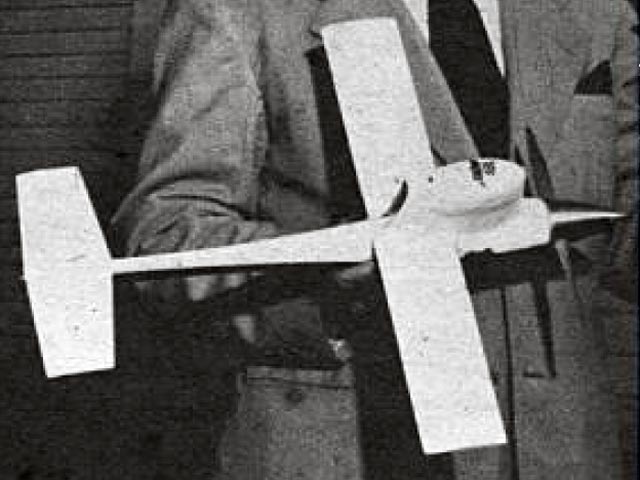