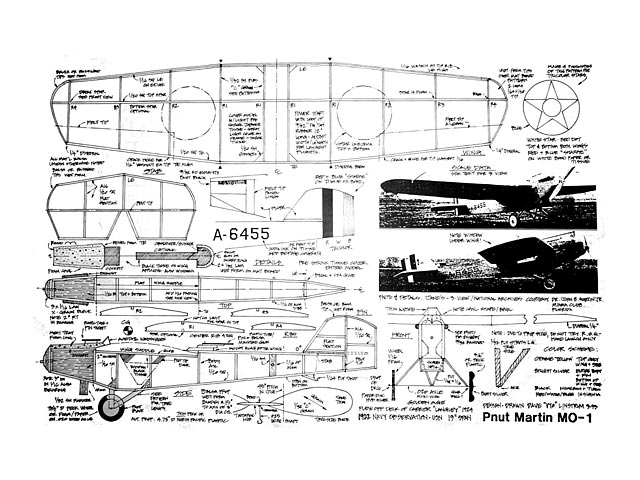 Quote: "This historic aircraft makes a good choice for Peanut Scale, as it is very colorful (silver and chrome yellow, with big wing stars and tri-color rudder) and has a big barn-door wing. It is ideal for outdoor hand-launch flying, but the gear is too short for the indoor 10-second bo-nus with Rise-Off-Ground launch.

The MO-1 Peanut is easy to build. The simple details like the exhausts, bombsight, machine gun and cockpit add a lot to its looks. On this model, the cockpit, connecting catwalk and gun pit are simulated with black paper, as are the win-dows in the access doors lust below the wing.

You should not attempt this Peanut unless you have some solid experience with stick-and-tissue models. We suggest you develop your skills by first build-ing the Peck ROG, Peck Sky Bunny and one of the simple Peck Peanut series, perhaps a Nesmith Cougar or Pietenpol Air Camper..."

Quote: "This is a plan for the Martin MO-1 1922, by Dave Linstrum as published in Model Builder Magazine August 1993. The plan, peanut scale, was originally included full-sized as the publication center section. Many years ago I constructed an enlarged version of this model as a 36” wingspan, 3-channel radio control model, using sheet balsa fuselage sides and empennage as well as Monocote covering. This model [main pic, 003-005] however, is rubber-powered with a 22" wingspan and utilizes a 7" dia. Sig propeller. It was constructed January 2020.
Seems the U.S. Navy issued a requirement (1922) for a long-range observation aircraft capable of taking off from a battleship turret-mounted catapult system. Not feeling that current American aircraft manufacturers had sufficient experience to handle the task, Fokker (Netherlands) was awarded a design contract. Glen L. Martin Aircraft was hired to construct the resultant aircraft, thereafter referred to as the Martin Observation One, or MO-1. I’ve labeled this model “U.S.S. UTAH 1” in tribute to the old battleship of that name, currently “moored” at Pearl Harbor. Construction is very basic and she’s a good flyer. Scale modeling need not be complicated, i.e., cluttered with detail." 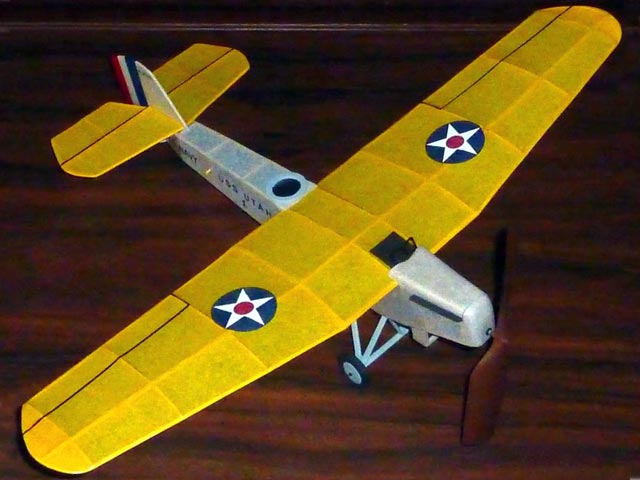