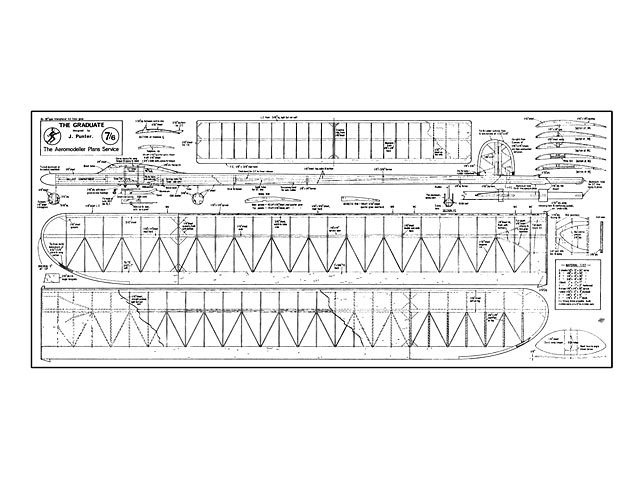 Quote: "Concluding Jim Punter's series on the design and development of the A/2 glider - and introducing: The Graduate.

CAREFUL CALCULATION of total area on my 1968 models indicated that there was 12 sq in spare, and this enabled 2 in extra span, not because that much area mattered, but because it increased the aspect ratio from 15 to 15.7.

It was not possible with the new pylon set-up to fit the timer in the region of the wing mount as before, and the fuselage had to be made slightly wider to accommodate the timer ahead of the dural pylon. To counter the effect of the extra frontal area presented to the air stream, and to reduce drag, the front of the nose was made more streamlined, although this probably only had a psychological effect! The wing and tail section were the same as for 68-2 and 68-3. The extra wing span was put on the tips. The model was completed early in February of this year and labelled 69-1.

It was some months before it was tested, but testing eventually commenced in April. The model had a reluctance to turn from the outset and tended to fly 'square corners'. I finally decided that the pylon was reducing the effect of the fin, and the fin area could safely be increased. This was duly done. Incidentally, the new autowhook was used on this model, but with a slight modification which made the whole thing neater. The hook was made considerably shorter, and a stronger spring was used with just as much success as the first hook on 68-3. Anyway, testing continued, with apparently favourable results.

The tow was as good as all the previous models of the series. The glide was certainly the best yet, as it ought to have been, with the highest aspect ratio, and the cleanest wing mount. Although the model had not really been tested as much as I normally like to test them before use in contests, the glide was so much better than my other A/2's, that I decided to risk using 69-1 in the Nationals Open Glider fly-off this year, after the three max's had been achieved using 68-3.

As it turned out, 69-1 won the fly off, but more I think because of the sheeted surfaces providing more waterproofing than the others, not a superior performance. What a fly-off! I spent the rest of the weekend drying out; I am sure that it will be remembered for a long time by those who flew, and swam back! It was necessary to use 69-1 on the second flight the following day in the A/2 competition, after 68-3 had been temporarily lost on the first flight (apparently some character in a Minivan downwind had picked it up, together with Ray Monk's model, and held them both to ransom).

On this occasion, 69-1 spun in off the top of the line, when l had released it into a very strong thermal. A the time I put it down to warps following the thorough soaking that it had received the previous day. Since being repaired and retrimmed, it had done exactly the same thing when put in a strong lift, only this time the fuselage was a complete write off; both times the wings knocked off perfectly safely, sustaining no damage.

My diagnosis of this is twofold, firstly I think that the fin area was increased too much, it never spun in before the fin area was increased, and secondly, warps. As I mentioned before, I do not normally wash out the tips, but let the tip curvature do it for me. Close inspection of the wings of 69-1 shows that the inner tip has a lot of washout, with none on the outer; naturally, this will act as an aileron and spin the model in. A new fuselage is under construction, and when finished, tests will continue, and I shall find out if the diagnosis is correct or if a major design fault is responsible.

Well, that just about brings things up to date, as far as the latest model. As for future developments, I think that the chord could be reduced by an eighth of an inch, and the span increased by another two inches, bringing the aspect ratio up to 16.4. This could probably be achieved using the same structure, without sacrificing performance consistency. Of course, if 69-1 turns out OK, this would be using the dural pylon wing mount. I am also toying with the idea of fully enclosing the timer, autorudder and D/T lines to reduce drag. This does bring about problems though, and so far a satisfactory means of doing it conveniently has not been found. There is also the old problem of aerofoil section. Although the Hirschel section has been used successfully so far, there is probably a better section, and experimentS may be tried in this direction.

A final word on gadgets and systems. This means, for a glider, autorudder, D/T lines, and towhook. On all models before 69-1 external lines were used. The release pin was 20 swg wire which was loosely fitted into an 18 swg brass bush set into the fuselage, the tension of the timer release line and autorudder line holding the pin in position. The D/T was simply a large rubber band, and all the tensioning etc was done by rubber bands of varying sizes. Although this system works well in practice, the bands have to be replaced when they perish, which could easily be overlooked. On 69-1 I decided to alter this system, and eliminate all the bands if possible. This proved to be fairly easy, and the way it was done can be seen in the various photographs. The D/T line was attached to a length of wire looped at one end to engage the D/T timer release arm, and bent to form a simple spring at the other. All the tensioning of the autorudder, and timer return mechanisms was achieved using light coil springs.

Well, that just about winds up the development story to date. I am sure that if I have made a blunder somewhere in the text the experts will be sure to put me right. Nevertheless, I hope the article has been interesting, and perhaps has given a slightly different approach, which will stimulate thought on the matter. I would like to add that throughout the development, which took just over a year, involving four models, discussions with, and criticisms and comment from my clubmate Jim Baguley have been most helpful, even though we don't always agree on the subject.

The model in the plan is 68-3, because this design is the most thoroughly tested of the series, and the latest model is by no means sorted out yet. I still use 68-3 for most competitions, and it does not seem to have any vices at all. The construction looks more complicated than it is, and most people who build it will realise this once they start.

Before starting the wing, a word on selection of material. The author feels that wood selection is of vital importance when constructing an A/2, and especially for the wing. Make sure that the wood selected is the same for both halves of the wing, this is normally quite easy because batches of wood in the model shop often come from the same original piece of timber and are all of similar grain type and hardness. Even selection of wood for both wing halves is important to balance the strength of the wing as much as to balance their weights.

Choose very hard trailing edge material for the inner wing panels. I normally use straight grained 3/16 sheet for this, and use the same sheet for two models, stripping off 1/4/ in strips for the centre section leading edge from the same material. The centre section wing sheeting is from straight grained, light medium 1/16 sheet balsa. Selection of the sheeting is difficult, the best balsa to use is light, but not soft. The surface is white, and it has fairly 'open' grain structure: If the sheeting is too heavy, then a heavy wing may result. The tips are made of very soft, light balsa, although this does not mean that the wood is necessarily weak. Try using springy balsa, not the 'pithy' stuff. For the ribs it goes without saying to use quarter grain material. Failing this, one could dope lightweight modelspan onto both sides of the 1/16 sheet before cutting out the ribs, to achieve the same result. Use medium balsa for the ribs in the centre section ,and soft for those in the tips. The 1/32 strips for tip lamination are soft and springy and must be straight grained. All gussets are of hard quarter grained material. The geodetic ribs are of hard 1/32 quarter grain balsa..." 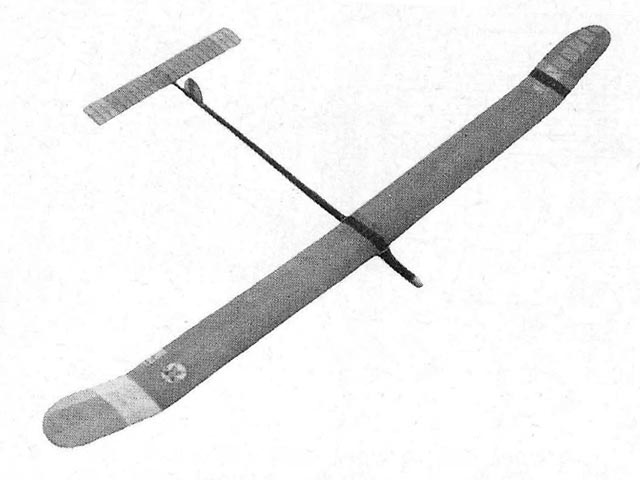