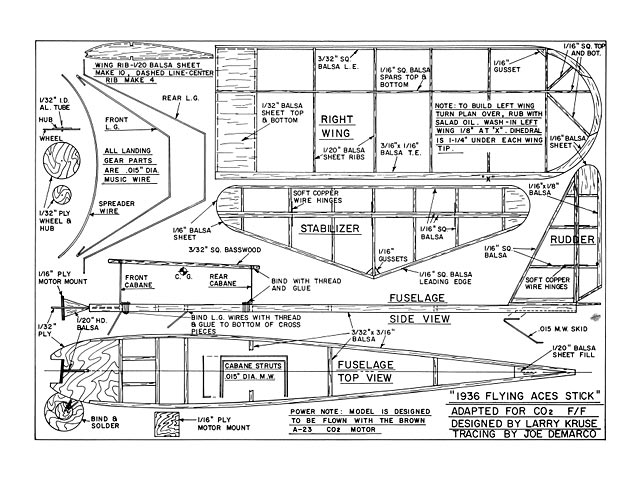 The Flying Aces Stick (oz225) was first published in the pages of Flying Aces, Sep 1936. This here is a later re-drawn plan at reduced size for CO2 power.

Quote: "Good things never get old. The author brings back a classic freeflight, this time set up for CO, power. Flying Aces Stick, By Larry Kruse.

The Flying Aces Stick was one of the early classic designs published in 1936 in the ancestor of this magazine, FLYING ACES. Originally designed by Thracey Petrides and Bill Effinger, it's been re-published in the last 50 years in a variety of forms. The latest was an electric R/C version done by Randy Wrisley in a recent issue of Model Airplane News.

For some reason, the Stick is one of those planes that just grabs you right from the start, so when I saw the cover shot of Randy's yellow and blue job with the sun shining through the wings, I was hooked. It just seemed such a natural for a small CO, model, and I just happened to have one of Bill Brown's tiny A-23 units unoccupied at the time the urge hit me. Isn't it great how things work out?

The fuselage of the little Stick is just that, a stick - or more properly, several little sticks, built directly over the plan. The 1/32-inch nose piece is the only former that requires any cutting tool other than a razor blade. Once the ply nose piece is cut out and sanded, it should be shimmed up 1/16-inch as it's placed on the building board in order to join the longerons at their center. It's probably a good idea to dampen the outside of both longerons at the nose area to accommodate the needed curve. Install the remaining crosspieces from the nose on back (except the front landing gear mount), join the tail, add the small triangular filler piece and tail skid, and glue in the motor mount as shown. If the nose piece and triangular support pieces for the motor mount are cut accurately, the down thrust and right thrust will be automatically set in.

Wire parts for the landing gear and cabane struts can now be bent and installed. Lash all pieces to the longerons and crosspieces as required with sewing thread. Install the front LG mount and coat all areas with Ambroid or a similar cellulose glue. Bend and wrap the bottom of the landing gear and spreader piece with light copper wire and silver solder the assembly together. The 3/32-inch square wing mount sticks are lashed and glued to the cabane wires as shown. Tweak the cabane wires to get an assembly that the wing will set upon squarely.

The wing ribs should be cut from light 1/20-inch and installed between the pinned down leading and trailing edges. Note the required wash-in in the left wing panel. Cut out and make up the wing tips as shown, and glue them into position, shimming them to an appropriate height above the building board. When both wings are dry, block them up to the required dihedral angle. The spars and center sheeting complete the wing assembly. Taper the trailing edge and round the leading edge as shown and then sand everything smooth in preparation for covering.

The tail group is built flat on the plan. I built the prototype with hinged elevator and rudder; however, the model required no adjustment. Your choice: if you decide not to hinge it, you should eliminate one of the spars from both the vertical and horizontal surfaces. Deleting the spars may eliminate the need I found for a bit of clay behind the motor mount in order to get the model to balance properly.

Wheels are cut from 1/32-inch ply with 1/32-inch ply hubs on the outside. Short axle bushings can be cut from aluminum tubing and 'Hot Stuffed' in place. Black Magic Marker was used to color the tire area. A drop of glue holds each wheel on the landing gear axle..."

Quote: "Steve, Mary, Find attached the plans and article for a CO2 powered free flight model of the Flying Aces Stick old timer. It was designed by Larry Kruse and published in Flying Models probably in the 70’s. It should fly well with a modern small electric motor and capacitor system designed for free flight models." 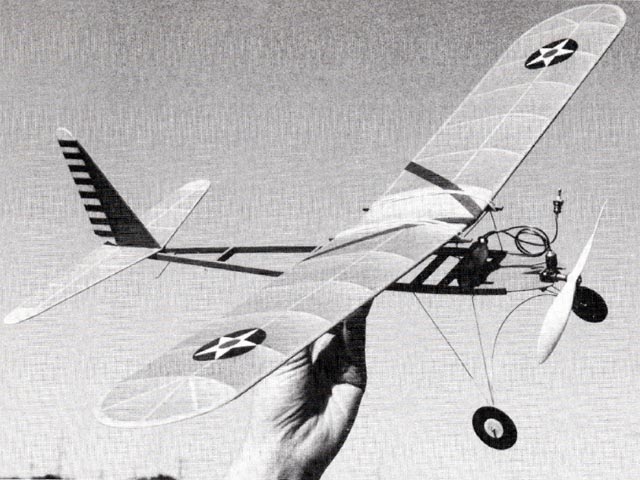