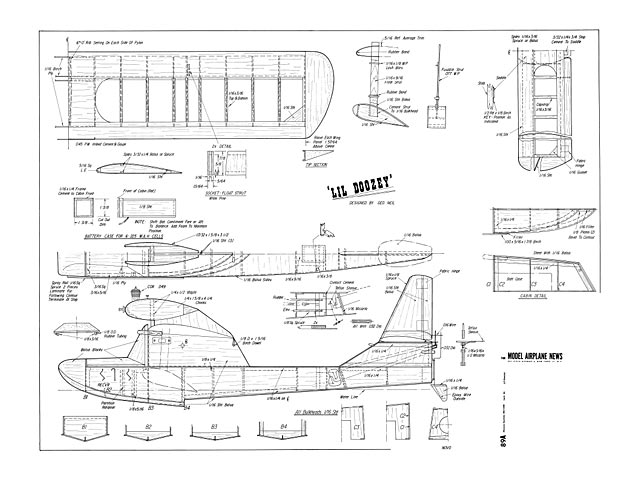 Quote: "Why not join the present rush to hydro flying with this excellent little single channel plane that has a successful history of off-water flying. Li'l Doozey, by George A Neil.

If you fly radio-controlled model airplanes for the sheer joy of flying, don't deny yourself the pleasure of hydro flying. The thrill of seeing a model air-plane leave the water and return for an unobstructed, smooth landing, is one which is questionably equalled in other areas of this fascinating and challenging hobby. The undeniable perfection of a body of water (when conditions are good), the relatively forgiving nature and abundance of this medium make it extremely attractive. While the density of boats (pleasure) is ever increasing, they do not present the problem provided by that solid block of houses on or near a site that was once a group's prized flying area. There are only a few of the advantages. Come on, join the group (hydro) and get your feet wet.

The logical choice of configuration for maximum hydro flying success is the flying boat. The sealed hull is excellent protection for the equipment. Vibration transfer to the equipment is reduced to a degree because of the distance and coupling between the engine and equipment. An effective spray shield is provided for the propeller and engine in an engine on center design; the merits of which are quite obvious. Due to the forced geometry of the flying boat outline, very definite aerodynamic 'net gain' for model purposes are also obtained. With reasonable care, a decided increase in engine life is noted. This can be attributed to the reduction of abrasive intake. Providing the model is in a level lateral attitude, the turning (yaw) moments are comparatively small. This incorporates within the craft a superior hydrodynamic directional stability.

The model presented here represents a philosophy of carefully weighed compromise in the preliminary as well as in the final design. Result was a model which satisfied the highest expectations on its initial and subsequent flights. Prime requisite was that the model be somewhat realistic in appearance and performance. After all, the term 'model' implies that it should be a small representation of the man-carrying counterpart. Since provision for adequate visibility is a prime consideration in the design of man-carrying aircraft, the cabin area was designed as a predominately transparent enclosure. The resulting high cabin, first in a series of compromises, made it very evident that the floats, required for lateral stability on the water, would have to be supported by long struts and because of their length they would be subject to obvious damage. It seemed evident that a mechanical 'fuse' would reduce this problem. The 'fuse' was a strut which was designed to fracture at a predetermined point under a predetermined load. In practice this arrangement functioned very well. A quantity of expendable struts were on hand as replacements. This insured against the loss of flying time and reduced the possibility of deeper damage.

Another design feature is the provision for inherent trim and alignment. Both are necessary considerations for optimum water performance. Ideal float setting is when the trailing tips of the floats are sufficiently immersed to position the model in level or near level lateral attitude. In order, at this point, is an explanation for the design of the float shape. Here again, compromise dictated that the shape selected must first satisfy the hydrodynamic requirements and be compatible in an aerodynamic sense. The high lift section contributes to the total lift and the flat lower surface generates high corrective forces at low forward velocities (the critical phase of the pre-flight stage.)

Next to be considered is perhaps the most controversial part of the design. The hull with all the aura of 'mystery' surrounding the design considerations involved can, usually, provide substance for a lengthy discussion. It represents the largest absorber and dissipator of energy at certain attitudes and velocities. In some areas it has led to the mistaken belief that excess power is a prime factor for successful hydro flying. It is true that excess power will, in some cases, force a poorly designed or trimmed (or a combination of both) model to become airborne. This design can be recognized by the characteristic long run at full engine output with the very steep, un-scale like, climb after 'break-away' from the water. The hull, along with other functions, should through the various stages of transition, maintain the correct relationship of the aerodynamic surfaces to their element. It must also achieve a degree of compatibility with the forces involved.

Without getting into a text book type discourse, we can say that a low beam-loading in conjunction with a minimum dead-rise angle is essential. The dead-rise angle is a factor in generating the lateral wave; the greater the dead-rise angle, to a point, the greater the lateral wave. Wave generation represents energy and in this case this energy must be supplied by the engine. It is in some respects as simple as that. Some dead-rise is, however, desirable for hydrodynamic directional stability. The angle in this design is comparatively small. Since the after body section does not totally remain in contact with water, the flat surface was found to provide no problem. The large, lifting longitudinal stablizer in combination with other forces plus the design angle of the after body, keeps this surface from water contact at low velocities..." 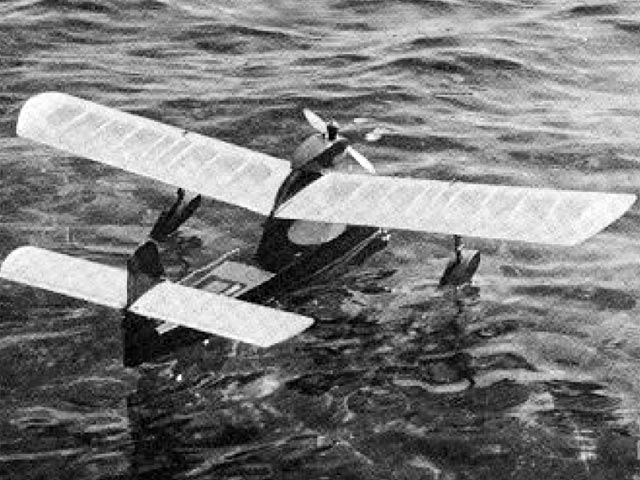