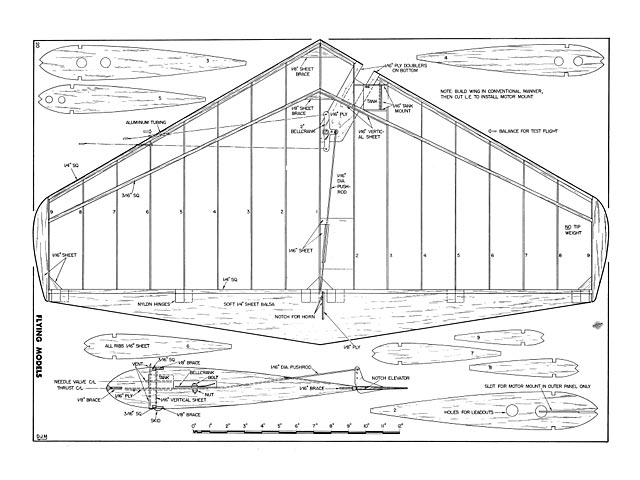 1. It stays tight on the lines. You won't be apt to lose control in a little wind.
2. It is practically crash-proof due to its light weight. It really bounces off the grass.
3. You can fly it almost anywhere. Line length is not critical and can be adjusted to your back yard or the local flying field. We have used 10 ft to 55 ft lines with good results.
4. Noise is kept to a minimum. The .049 Diesel or Glow doesn't make much more noise than a power mower.
5. You can fly slower with the offset engine.

We have incorporated the offset engine on eight different designs - one twin boom design, less flaps, a pair of profile trainers with flaps and five flying wings of assorted shapes and sizes, with full span flaps. Power ranged from an .020 to a .35 and about one-half were diesels. Bernard Ash designer of Jim Vornholt's 1961 scale stunt winning Airon), is presently experimenting with a serniscale stunt T-38 Freedom Fighter that uses the offset motor and is powered by a Fox .59. We have two new ones on the board ourselves, so we feel quite safe in saying you will see more of this feature simply because you can fly slower and stay tighter against the end of the lines.

Construction is simple and quite conventional so we won't trouble you with that; however, we would like to add a word of warning and a few suggestions.

Warps cause flying difficulties! They are usually acquired while covering. To eliminate any chance of warping, we suggest you build your wing in the conventional manner. When you are ready to cover, block the wing up under the flat surface of each wing tip. The blocks must be parallel and the table flat. Add weights to the tops of the tips to prevent any twisting. Now measure the distance from the wing tip center to the table. This dimension should be the same across the entire leading edge, the other wing tip and the entire trailing edge. If the measurement's smaller in some areas, add wedges under the wing where they are needed, If the measurement is larger than at the tip, add weights where they are needed to the top of the wing.

Cover one half of the wing with wet, lightweight Silkspan. Remove the weights and turn the wing over, car' rect the alignment quickly and cover the entire bottom of the wing. Again remove the weights and turn the wing right side up. Reset the alignment if necessary and cover the other half of the top side and allow to dry. Your wing should be blocked up while each coat of dope is drying. We recommend two coats of thin clear dope followed by three coats of thin red dope. When the dope has dried, cover the tips and trim to suit.

I had a great idea for trimming, but my wife vetoed it. I wanted to paint a brown jug on the wing to convey the idea of moonshine - you know, like in the song: 'the moonshines tonight on pretty Red Wing'". I still think it was a good idea!

Balance your Red Wing nose heavy to begin with. If the CG is too far forward it won't stunt, but it will groove like a bowling ball sliding down the gutter. If it is tail heavy, it will turn tighter than a six weeks old puppy chasing his freshly flea-bitten tail and you'll be all over the sky and sod!

If you are planning on practicing your pattern with your Red Wing, you will find that 10 ft lines are fine for round maneuvers and inverted practice. For square maneuvers, you should go to 20 ft or 30 ft lines. Lots of fun with your new ship! We've enjoyed ours." 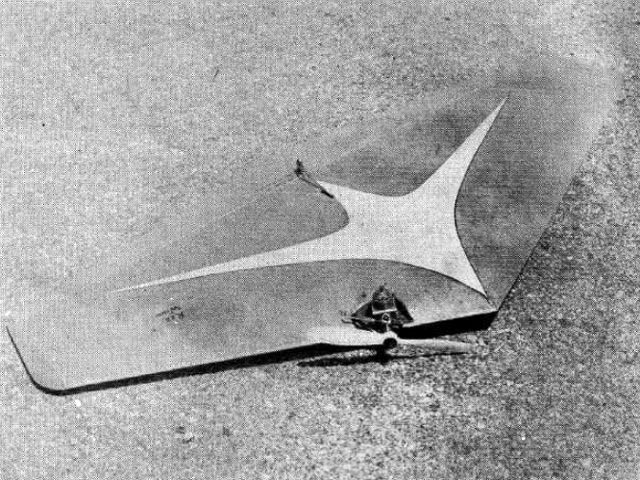