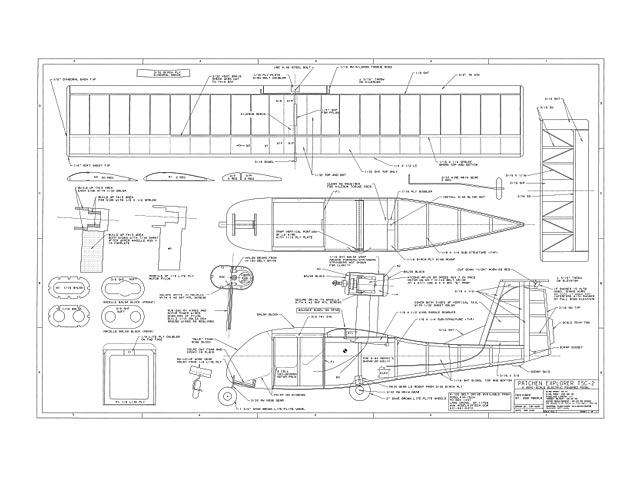 A neat aspect of building scale models is finding a little-known, full-size aircraft for the subject. Anyone can build a Piper Cub or a Cessna, but not everyone has heard of a Patchen Explorer TSC-2. When I start a scale project, I always look for obscure aircraft. Fellow retired Grumman engineer Nick Dannenhoffer gave me a photo of the Explorer a dozen years ago. I recently pulled the photo out of its file and decided it was time to share my find with others. Working from that single photo and a specification sheet, I ended up creating an electric-powered model.

The Explorer was apparently designed by aircraft engineer David Thurston, who was responsible for some of the early Grumman civilian designs (the G-63 Kitten, for example), as well as the Republic Seabee amphibian. He later went on to design the Teal amphibian. The Explorer was essentially a land-based version of the Teal and was developed for pipeline patrol operation, aerial photography and law-enforcement agencies. The large forward view from the unobstructed canopy made this an ideal observation aircraft.

Construction of a prototype was completed by the Aerofab Corp. of Sanford, ME, and its flight-test program was completed in November 1972. The full-size Explorer had a 32-foot wingspan, weighed 1,370 pounds (empty) and had a maximum takeoff weight of 2,200 pounds and a maximum cruise speed of 125 to 130mph. It was powered by a pylon-mounted Lycoming 200hp 4-cylinder, air-cooled engine.

ABOUT THE MODEL: The Explorer can easily be built in a variety of sizes, depending on your application (and modeling budget!). A larger 1/5 or 1/4-scale version would provide an excellent vehicle for a nose-mounted video camcorder or digital camera. A smaller model (such as the one in this article) might house a tiny video camera capable of broadcasting a signal back to a ground-based monitor.

For this construction project, I chose a wing area of approxi-mately 300 square inches and a target weight of 30 ounces. Because of the pylon-mounted, high-thrustline motor, the choice of electric power made life easy for me. With an electric motor, I didn't have to be concerned with throttle and carb-linkage controls and adjustments, nor did I need to worry about placing a fuel tank in the pylon. The weight of the motor battery, placed up toward the nose, makes it easy to balance the model.

With a model that weighs 30 ounces, I was at the upper limit for a geared Speed 400 electric motor; at the same time the model is too light for a Speed 500 or 600 or an AstroFlightr 05 Cobalt. My compromise was to choose a Speed 480 (also known as an AP-29). To enhance the output thrust, I also chose one of Tom Hunt's Modelair-Tech H-100 belt drives using a 2.57:1 reduction ratio along with an 8x4 prop. Selection of the reduction ratio is very important because there is just so much clearance available for a propeller before it hits the top of the fuselage.

CONSTRUCTION TIPS This won't be a step-by-step procedure, but I will highlight some of the important areas. The wing has a flat-bottom, modified Clark-Y airfoil so it can easily be built an a flat board. My rib spacing tended to be a little on the close side, so you might consider increasing the spacing to 3-inch centers. It is important that the spars be made of spruce, not balsa. Also, don't forget the vertical grain 3/32-inch balsa shear webs between the spars for extra strength.

The motor-mounting pylon is 1/4-inch thick and fits into a slot formed by two centrally located wing ribs spaced 14 inch apart. Use a piece of scrap 1/4-inch balsa to set these two ribs in their correct positions. Keep in mind that the wing actually has a small amount of dihedral (about 1/2 inch under each wingtip), so a center plywood dihedral brace is necessary.

Probably the most difficult part of the entire construction is the motor-mounting pylon. Quite a few pieces are involved, and even with these detailed plans, you still might need to add a little of your own imagination. Keep in mind that the thrust-line angle is not very critical to flight performance.

The motor-mounting pylon starts with a center core piece made from 1/8-inch lite-ply. Sixteenth-inch balsa is added to both sides of the pylon, bringing the total thickness to i1/4 nch. Add several pieces of 1/8 x 1/4-inch spruce and some 1/32-inch balsa just before you screw the Modelair-Tech H-100 belt drive assembly into place. Actually, the H-100 molded beam mounts are attached to the pylon/mount structure. Next, add the two balsa formers N1 and N2. At this point, install the electric motor speed control of your choice to the opposite side of the motor inside the pylon assembly. Solder the ESC wires to the motor terminals (polarity Is not reversed when you use a belt drive!). Then add the eight, 3/16-inch-square stringers between the two balsa formers.

To allow the ESC and motor battery cables (16-gauge wire) to pass down through the wing to a point where the cables can enter the fuselage, you must fashion a channel out of balsa sheet along the side of the pylon..." 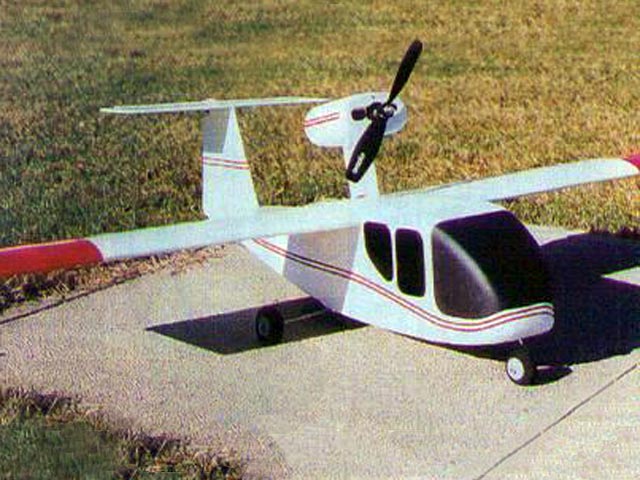