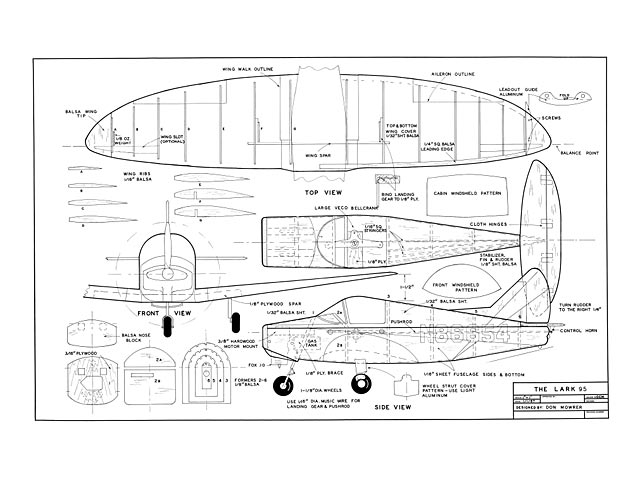 Quote: "Lark 95. Simple control scale for Sunday and Sport flying is the proud boast for our exciting little machine. Lark 95 actually is a take-off of the Culver Cadet lightplane.

One of the newest aircraft to hit the skies is the Lark 95, the result of Colonel Homer Helton's dream to produce an airplane an average guy can afford to own and fly. Its 90-horsepower Continental engine pulls two people at a .maximum speed of 145 mph and cruises at 132 mph while drinking only 5 gallons an hour.

If you think this model looks familiar, look out! Your age may be showing, gramps. Remember that cosy little plywood sportplane of 1939 called the Culver Cadet? Perhaps some of you remember drawing a bead on the Cadet when it was used as an Army target drone.

Col Helton came across the Lark Aircraft Corporation in Tracy, California, while looking for an inexpensive civilian plane to put on the market. The Lark Corporation was playing with the Cadet plans so Helton bought the firm, trucked the prototypes, plans, jigs and spare lumber to Falcon Field, Mesa, Arizona, where he set up shop with the handle: Helton Aircraft Corporation.

The first Lark was sold to a Californian in September, 1966 for $7000, LARK 95 only six months after the corporation was founded! Helton hoped to produce 50 planes per month by 1967.

The plans published in this issue of MAN were taken directly from company blue prints and bears the fuselage number of the first Lark sold by the company. A tour of the plant facilities was also made to familiarize myself with the plane's construction details. Every effort was made to retain exact scale in the model and yet keep construction relatively simple.

Just as Colonel Helton feels that the Lark 95 should be a plane the average fellow can own and fly, I also feel it should be a plane the average modeler can build and fly with ease. You will not find any complicated construction 'bugs' in these plans and if followed methodically, the Lark will go together surprisingly fast. Economy is not only a feature peculiar to the parent plane, but is an important consideration of the model as well. Powered by any inexpensive engine from an .075 to a .15, the finished product should cost less than $15.00 engine included!

CONSTRUCTION: Fuselage: Using carbon paper, copy the fuselage side and use it as a pattern to cut out two sides from 1/16 sheet balsa. Be sure to mark the former locations, then glue the sides together at the rear. While drying, cut out formers 2 through 6 from 1/8 balsa. Number 5 can be cut out of number 4; Number 6 is cut out of the center of 5. You should cut out a space from the center of number 3 so the push rod can be fitted through..."

Update 19/6/2022: Replaced article with complete version, thanks to RFJ. 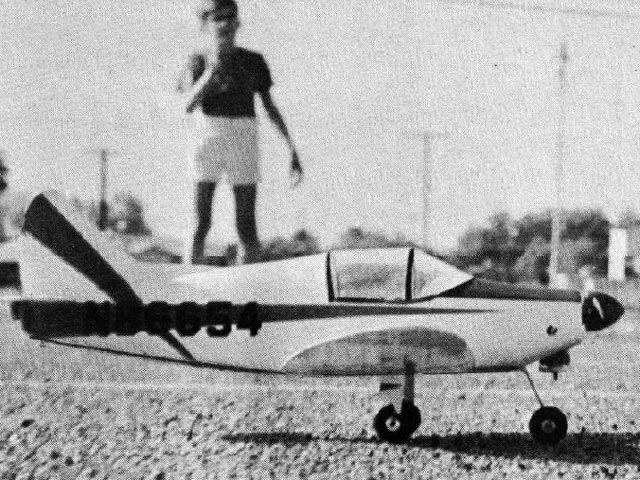