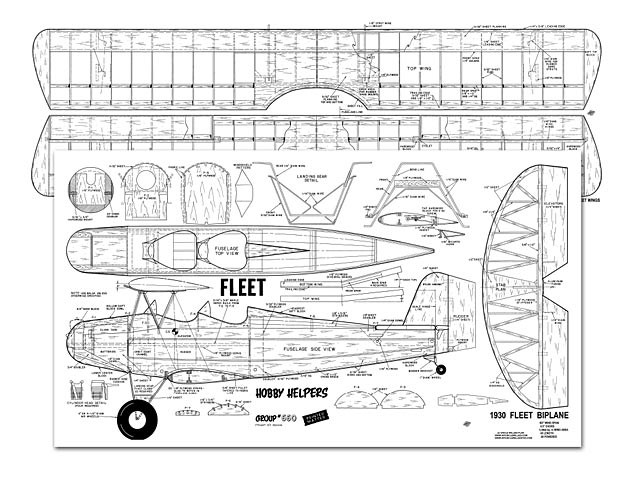 Fleet! - what a magic reaction this one word evokes when mentioned in the vicinity of almost anyone who flew in the 30's. Eyes grow reflective, smiles begin to curve and you can sit back and relax to several hours of reverent remembrance. Oh well! - suffice to say, the Fleet was, and still is, a perfect example of the old-time biplane loved by so many. She was both maneuverable and stable; not too small, not too big and with all her curves in just the right places. In short, an ideal modeling project.

There were several different Fleet designs incorporating different makes and styles of engines, both inline and radial. The inline F-10-G Fleet, requiring no dummy engine to reproduce, was my first choice and was designed, built and flown several years ago. Since then, desiring the beauty found only in the radial engined F-6 Fleet, I have designed and built two more models the last of which is presented here. This third version is my latest attempt to combine the good features of the first two with the accepted best construction features of today's championship models. A little scrutiny will show features developed and perfected in the 'Hog' series that would be hard for anyone to improve on, particularly me.

The primary purpose of this project was to produce a model that looked like the real thing in the air without sacrificing flight ability or everyday ruggedness. I wanted a scale model capable of sport and championship flying throughout the flying season - one that would show itself on the flying field, not on the piano at home. I have therefore departed from scale only where scale design interfered with these characteristics and the final result is a model to satisfy the flyer's demands and still look like the real thing in the air.

Departures from scale include top wing dihedral, enlarged stabilizer, symmet-rical airfoil and wing incidence angles. The real Fleet had no top wing dihedral and flying surfaces were all at zero angle of incidence.

Construction Notes: Cap strips are omitted from top of wing ribs to give a more scale-like wing; the cap strips on bottom of ribs providing ample strength where it won't show. This also applies to the stabilizer construction in that the anti-warp diagonals are 1/8 inch below the rib top surface and thus provide their reinforcement without showing on the top covering.

The wing spar construction is a copy of the most popular type in use today with a new twist which was suggested by Guy Oliver of San Antonio and which I like very much. Instead of adding the webbing between the spars and each rib after wing is assembled, the 3/32 by 3/4 webbing strip is marked and slotted half way through for each rib and is then glued to the bottom 1/4 sq cap. The ribs are shown with their webbing slot. Sim-ply pin the spar over the plan, slip the ribs into their slots and glue the top 14 sq cap strip to the ribs and webbing. Makes for accurate wing alignment and speedy, strong assembly.

Elmers white glue was found very satisfactory in attaching all fuselage blocks and doublers, contact cement for attaching wood strips to wire landing gear and cabane struts and Duco house-hold cement for windshield assembly. 1/4 inch black spaghetti split down the middle is sewn to the cockpit outlines with an in-and-out stitch. I could find no glue that would hold this material as satisfactorily and the sewing adds an-other touch of realism.

Although not shown on the plans I found it possible to cut a number of lightening holes in the plywood fuselage sides without substantially decreasing the strength of these members. Just be sure to have plenty of wood connecting the main fuselage stress points at landing gear, wing struts and motor mount. I also found it necessary to add a 3/16 sq top longeron to each side from the rear cockpit to leading edge of stabilizer. Access to the receiver and servos is through the bottom wing opening and batteries are installed and replaced by removing the top cowl block and gas tank..." 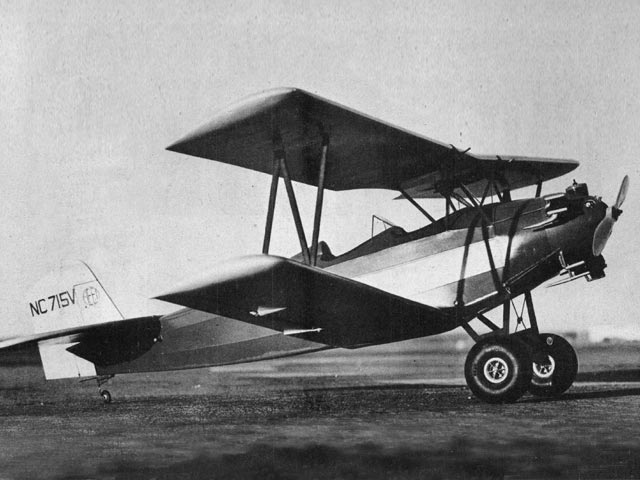