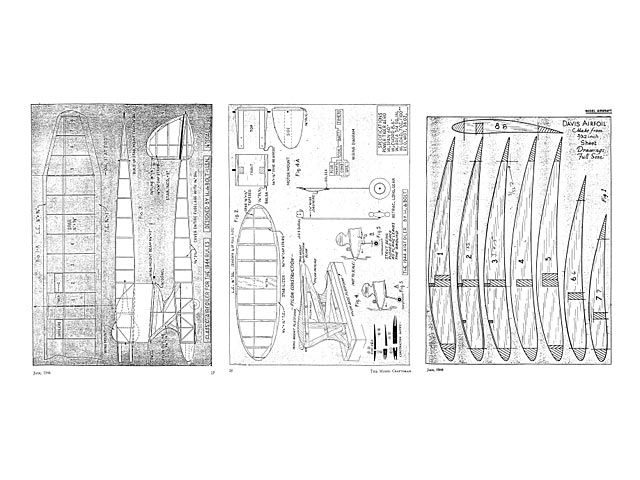 This is the first appearance, the original version, of the Airfoiler design.

Note this is not a full size plan. This is a scan of the drawings as they appeared, printed in the magazine pages in 1944.

Quote: "The Airfoiler for '44, by H deBolt. This Class C gas-powered model plane has been flight-tested. It was designed for Tiger Aero, but similar engines can be used. Has Dethermalizers and Retractable landing-gear.

WHEN the new rules were announced in January, to me they offered a challenge - a challenge to build a plane that would not only perform as good as the old ones - but better. As one can easily see the only major change outside of cross-section and ROG take-off, is the increase in wing loading. The object for this entire design was to overcome this and improve soaring qualities if possible. This was done by using an airfoil fuselage, a high aspect ratio wing and a Davis airfoil set at 7 degrees, which helps to no little extent. The results were all that was expected, as the model averages better than three minutes in dead air.

The original model was powered with a Tiger Aero, but any one of the following motors can be used by changing the wing area slightly: OK 49, Dennymite, Cannon 33, Comet 35 or any of the Bunch series. If you have one, dust it off and let's get started on the construction. This design is for Class C.

The original model used wing spoilers as shown, for dethermalizers and they worked very well when opened to a 43 degree angle. However, too much detail is not shown, as almost everyone has their favorite type by now, or at least a way to operate the release. In any case, some type should be used as she really can 'sniff out' the thermals. To finish, the wing is covered with silk-span and given three coats of dope.

FUSELAGE: The fuselage is the usual box type (see Fig.3) except for its shape, and it is built up from 3/16 sq pine or bass; you will find this to be necessary in order to meet the weight rule, but then too it does yield a much stronzer structure. The pylon outline (Fig.4) is built up from balsa and while drying the pylon platform is installed and the 1/8 x 3/4 pylon post set up. The outline is now cemented in place and the ribs installed. The wing mount planked from 1/8 x 3/8 on the wing, using wax paper; and when dry remove and trim to shape..."

Quote: "I have attached an article from The Model Craftsman magazine, June 1944 by Hal Debolt which includes the plans for the original 1944 Airfoiler that was designed in 1939 and first published in this 1944 article." 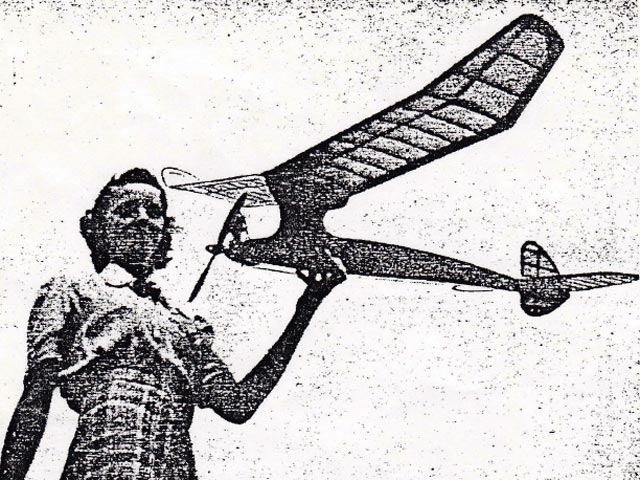