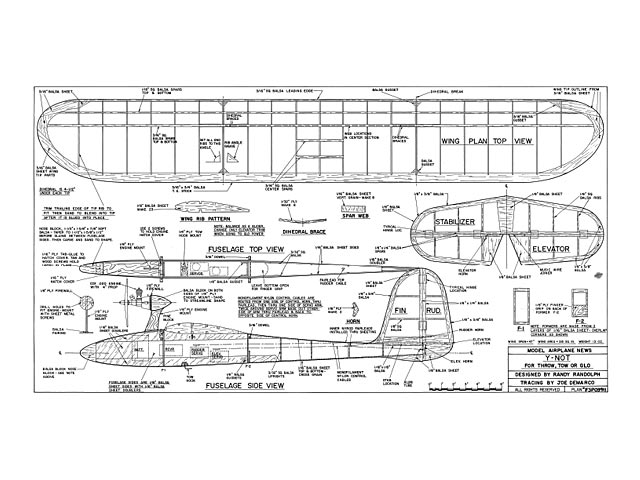 Quote: "IT'S A HAND-LAUNCHED glider, a high-start-launched sailplane, or an .020-powered Sunday flier. The Y'Not is as versatile as you can get from a 2-channel radio system.

Granted, it's neither the best hand-launched R/C glider in the world, nor is it a crackerjack sailplane, but it's small enough to be thrown high enough to reach thermals, and it's light enough to soar in very gentle lift. As for being a .020-powered sport flier, its bag of tricks includes loops and stalls and, with some luck, a ride on a thermal now and then. If the grass is short, soft and dry, Y'Not will even take off with just the slightest shove.

The Y'Not is a 'Jack of all trades and master of none,' but like 3-in-1 Oil, it sure is handy to have around!

CONSTRUCTION: The identical ribs can be cut at the same time: stack 1/16-inch blanks and use a band saw to cut them out. You could also make a template and cut each one individually out of 3-inch wide sheet. The two tip ribs are cut to length, glued into place then sanded to blend with the tip. The four ribs at the center have extra notches to receive the false spars that are used instead of sheeting.

You can strip the spars or buy them. The top and bottom main spars should be of fairly firm wood, but you can use medium-hard wood for the leading edge and the other spars. To ensure a strong, solid joint with the ribs, notch the trailing edge at 2-inch intervals. Slice the tips out of soft, 3/16-inch wood with the grain running lengthwise. Make eight dihedral braces out of 1/32-inch plywood.

Like most built-up wings, the Y'Not's are built right over the plan. Start with the center panel: pin the trailing edge and the bottom main spar into place and add the ribs. Make a dihedral gauge out of scrap wood, and use it to set all the end ribs to the proper angle on the spar and trailing edge. When you've assembled the ribs, add the webs to the center and the top main spar, the top leading-edge spar and the leading edge. Notch the center ribs for the false spars. When you've removed the panel from the plan, add the bottom leading-edge spar and the false spars.

Build the tip panels in the same way, again using the dihedral gauge on the end ribs. Glue the tip bows over the plan, and insert them between the leading and trailing edges. Notch them at the trailing edge to receive the tip rib. Trim the tip rib to fit between the leading edge and the trailing edge, and glue it into its notch in the bow, then sand the top to conform to the airfoil's shape. Deepen the spar notches so that the spars are flush with the top of the rib. Butt the top spars against the tip bows, and when the glue has set, taper and sand the bows to a knife-edge that blends into the leading edge.

When you've completed all three panels, sand the spar ends and trailing edges to match the dihedral angle set in the end ribs. Pin the center panel onto the bench. Elevate the two outer panels so that the tips are 41/4 inches above the bench, and join them to the center panel. Widen the main spar notches in the ribs with a single-edge razor blade, and insert the top dihedral braces on both sides of the top main spar. When the glue has set, take the wing off the bench, add the bottom dihedral braces to the bottom main spar, and sand the completed wing. Strengthen the center of the trailing edge (where the rubber bands that hold the wing on will go) by adding a 4 inch piece of 1/32-inch music wire to the area.

The stab-elevator and fin-rudder are built right over the plan in the same way as the wing. Cut out the curved pieces first, again with the grain running lengthwise. Build the elevator with the 1/8 x 1/4-inch spar running along its full length, and when you've completed the stab, inlay the 1/8-inch hardwood dowel carry-through into the leading edge at the center. The plywood control horns will be added after you've finished covering and hinging. Cut the sub-rubber out of 1/8-inch sheet balsa..."

Quote: "Steve / Mary, Here is a scanned copy of the article and plans for Randy Randolph's Y'Not glider. My wife wanted to build and easy to fly model to get started back in 1996, so I figured this would be a simple but great flying model. I love the transparent red monokote! It was in the March 1991 Model Airplane News and is powered by a TD .020. Brian"

Quote: "Attached please find laser cut files for the Randy Randolph design (oz12830) Y-Not. This is a plane everyone should try when first starting out! Thanks again for your great work in our hobby!" 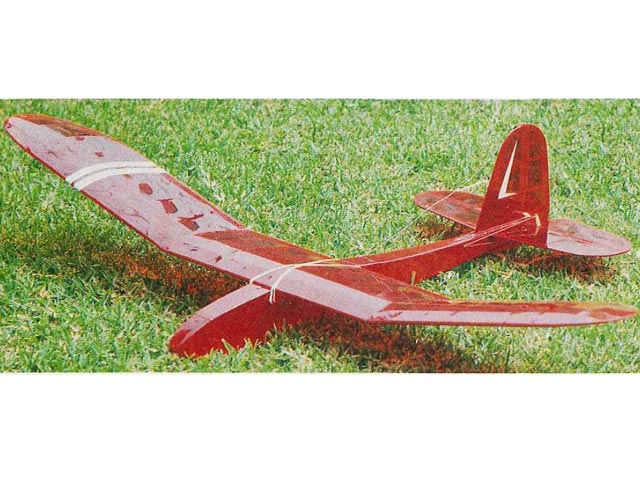 THANK YOU THANK YOU THANK YOU
I posted this in the wanted section and my dream came true today. To show my thanks I will provide laser cutter files after I get them done.
Matt Foley - 02/03/2021
Cute model. Article is not complete though, says continued on p113 but no p113.
Martin Hodgson - 02/03/2021
Add a comment