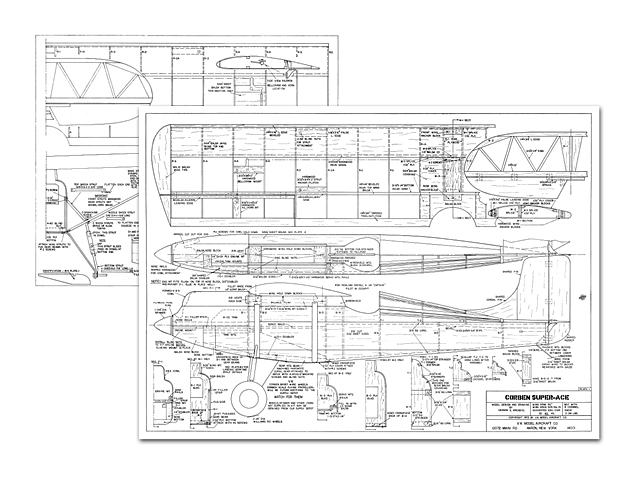 Quote [from 1976 VK catalog]: " Recapture the Thrill of the 30's - that Classic Era of American Aviation. The Corben is the first in our New Era line of models. These will be models of airplanes that were prominent during the Twenties and Thirties. It is basically 2 in = 1 ft (Eyeball) scale. Flight characteristics are extremely good with a .40 engine. The model will perform the full stunt pattern. We believe this is an ideal model for a modeler who wants to get into scale with a minimum of work. Formed cowl. Dural gear. Decals. $39.95"

Quote: "RCM tests the Corben Cuper Ace. By Gil Horstman. A beautiful kit from VK products that recaptures the thrills of the classic era of American Aviation.

One of the most renowned kit manufacturers in the United States is VK Model Aircraft Company 12072 Main Road, Akron, New York 14001. With many years of experience in the RC kit industry and many excellent kits to their credit, it was no surprise to us that their newest release, the Corben Super Ace would enhance the already enviable reputation of this company.

For those of you who like Stand-Off Scale models with high performance characteristics, and particularly those types that recapture the thrills of the classic era of American aviation - the barnstorming days of the 30's - the Super Ace is for you.

In this author's opinion, the new VK kit is a good one. We will point out that the kit is comparatively easy and fast to build when compared to more complicated true-scale models. However, the manufacturer does not recommend the Corben for inexperienced builders and the instruction sheets mention important points of construction only, rather than giving complete step-by-step instruction details.

We tried to follow the plans as closely as possible, which is a must to properly evaluate any kit. I did make a couple of changes in which you might be interested if you are contemplating building the Corben. First, I added a stringer along the turtledeck between Formers T-1 and B-7 which gives an attachment point for the covering. Secondly, I spread the two plywood ribs in the center section of the wing wide enough to allow for mounting a KPS-12 servo. This leaves a nice hole that needs a cover, so a scrap of 1/32 plywood was used as a 'door.' I used the old stand-by consisting of 1/16 music wire and bellcranks for aileron control which has worked quite satisfactory. If you do it this way, be sure to place plywood rib bearings along the music wire to eliminate any possibility of sloppy control. In addition, I opened up the bottom Former, B-1, so that my battery pack could go up under the tank. Be sure to thoroughly fuel proof the battery compartment and the tank area.

If I were going to build a second Super Ace I think I would add a couple of more items to the modifications list. The trailing edge of the wing seems to be a little fragile and, even though we have had no difficulty on any flights, I would feel a little more secure with gussets at each rib where the latter butt joins the trailing edge - especially at the corners of the ailerons and the aileron opening. Also, the covering material could use a wider surface for attachment at Former T-1. Perhaps a scallop arrangement or even just an additional 1/8 or 3/16 added to Former T-1 would be helpful.

I enjoyed every minute of building this kit right up to my life long hang up - finishing! As good fortune would have it, a good modeler friend, Randy Holzapple, is a super Solarfilm artist. Randy offered to teach me how to put on what you call your 'better than average' finish, using Solarfilm. As it turned out, it was easier for him to just do it than to teach me, which accounts for the fact the Corben looks so nice in its finished configuration.

When I had completed the Corben, I had the skiis ready to install as the final task before the morning test-hop when my wife, Clara, entered the shop and suggested I check the weather. I didn't feel that there was any need because everyone knows there is plenty of snow in North Eastern Washington in January - right?

Wrong! This morning saw 20 to 30 mph winds and temperatures in the mid-40's and, by lunch time, all the snow was gone. I took a picture of the Corben with the skiis on it, hoping the exposure might cause snow to reappear, but it didn't, so it was back to wheels.

The best part of this entire project was seeing this magnificent model of a great plane out of aviations yesteryear fly. My version has a tail skid on it and seems to handle very well on the ground. As with most all tail-draggers, you need to be up with the rudder on both take-off and landing approach. I feel that the aircraft would fly very well on rudder, elevator and throttle by simply adding just a slight amount more dihedral for those of you who only have a 3 channel radio. However, using the ailerons as shown on the plans, this aircraft does not fly like your basic pattern ship. In order to obtain nice rolls and other positive aileron controls, you need to coordinate the rudder and ailerons just like you would do in a full size aircraft. The effects of adverse yaw could be reduced by installing differential linkage for the ailerons. This aircraft flies well enough that a person with 3-views and documentation could develop a highly competitive scale machine.

My prototype Corben Super Ace is powered by a K & B .40 front rotor engine which is more than adequate power. It's guided by a Kraft Systems radio with KPS-11A servos which should give heart to the guys with older radios. As previously mentioned, the finish is Solarfilm.

As a side note, this airplane uses a lot of blind nuts in construction. Be sure to secure these blind nuts while you are building. It's pretty frustrating to get to the last bolt in the landing gear and push one out which means that you have to take the whole thing apart to replace it!

If you've been looking for a 30's era model that flies extremely well, and looks even better, we couldn't suggest anything nicer than this Corben Super Ace." 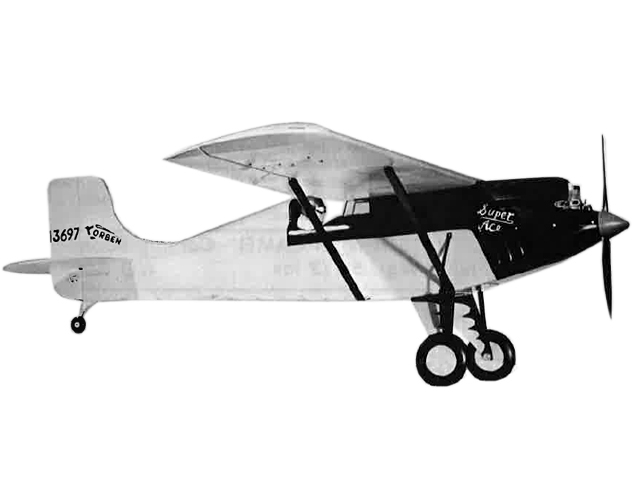