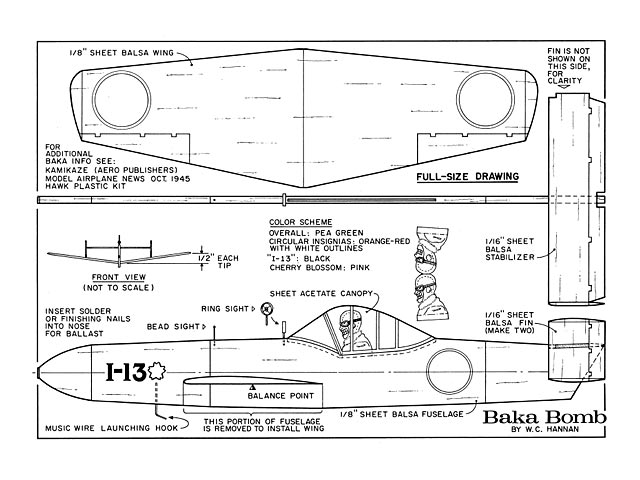 Quote: "Balsa Baka Bomb, by Bill Hannan. Our profile version of this one-way, piloted bomb is launched by catapult; original was bomber-carried.

THE Japanese 'Baka' series of piloted bombs were developed as an emergency effort, toward the later stages of WW II, in an attempt to thwart the Allied naval attacks. These little one-way bombers were generally carried by twin-engined Bettys to within about 50 miles of the intended targets, whereupon the Bakes were released to glide the remaining distance, assisted during the terminal phase by three rear-mounted rockets.

The US Navy bestowed the name Baka (fool) upon the tiny machines, but the Japanese referred to them as 'Okas' meaning Cherry Blossoms. Some examples of these aircraft are still in existence. One is on display at the Ontario Air Museum, Ontario, California; another is in the Air Force Museum, Dayton, Ohio, and at least one more may be viewed in Southern Japan.

Although several variations of Bakas were produced (even a two-seater!), our little catapult glider is based upon the OKA-11.

Construction: Here's a chance to use up some of that heavy balsa wood left over from the last kit that you bought! This bird should be built from medium-hard or hard balsa, in the interests of ruggedness. Extra weight will merely mean that it will need to fly a bit faster.

Fuselage: Trace the outlines of the fuselage onto thin paper, which will serve as a template. Transfer the outline shape to a sheet of flat (not warped) 1/8 balsa. Cut the fuselage to size, being careful to preserve the alignment of the wing opening and stabilizer mounting area. The section of the fuselage beneath the wing is removed, to be replaced during assembly. Give the fuselage a good overall sandpapering, and round all corners to a smooth contour, with the exception of the stab mounting area, which is left square. Cut two cockpit canopy halves from fairly thick clear acetate sheet. A groove is made in the top of the fuselage to receive them.

Wing: A sheet of 1/8 flat sheet balsa is used for the wing. After cutting the wing to outline, shape it to an airfoil section, as indicated on the fuselage side view. A razor plane and a sanding block will make short work of this operation. Slice the wing at the centerline, and bevel the inner sides to achieve the correct dihedral angle. Rub a little glue into each side, reglue, and block up one wing tip, while the joint dries.

Empennage: The tailplanes are cut to shape from 1/16 sheet balsa, and sanded to a streamline cross-section. Be sure that the stabilizer ends are parallel, so that the fin-rudders will not toe in or out... 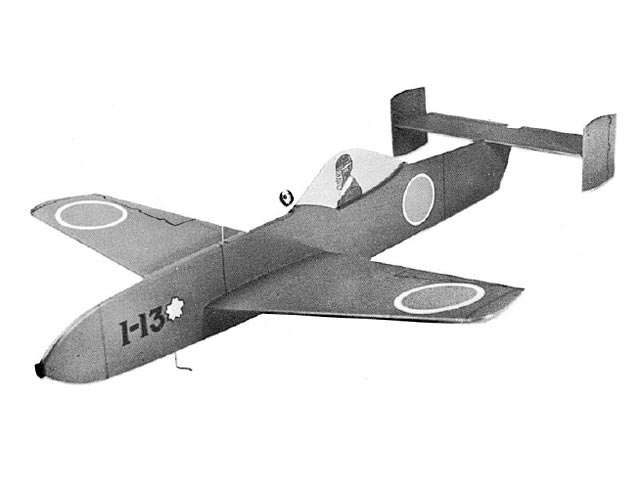 'Baka' is a Japanese word that deeply insults pilots flew the manned Bomb planes. The pilots never be stupid and never wanted to die but flew for their families. May I ask to change the name of the model plane. For example, 'Ooka' or its corresponding English word 'Cherry blossoms'.
Norihiko Nishiguchi - 15/09/2021
It's a fair request, and I appreciate your reasons for asking. It is not our intention to offend anyone. This is not the name I would have chosen. If a new plan was to come along now using this name I would (acting as the site editor, if you see what I mean) ask the designer to re-think the name. But this plan isn't new, it was published in 1969 - and this is the name, the title, that was used. It was printed on both the plan itself and in the article pages, the contents, the index of the AAM magazine. This is regrettable, but it's a fact. As our purpose here is to record the history of aeromodelling, I'm sorry but I don't think it would be helpful to edit the historical name.
SteveWMD - 15/09/2021
Add a comment