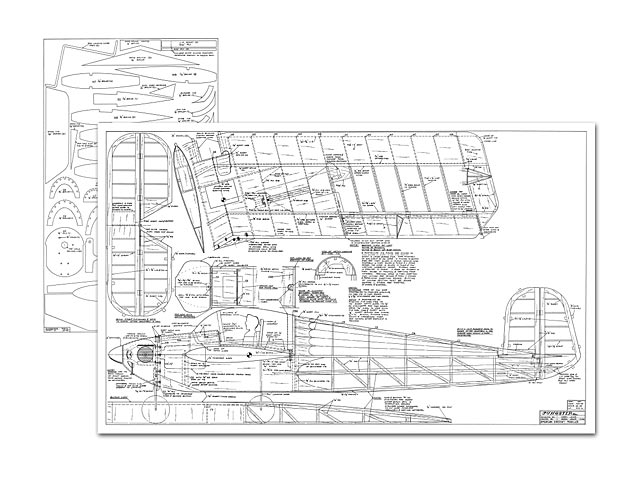 WHAT the heck is a Jungster? It's a Jungmann gone single-wing, and modernized. It's simple and fast to build, and resembles a modern homebuilt aircraft.

My scale Jungmann had such good flying characteristics, I decided to build a single-wing version for aerobatic competition and Sunday flying. Coincidently, the nose and tail moments are the same as a Kwik-Fli. The Jungster goes together quickly and cheaply since the fuselage is just a bundle of sticks with no carving of big, expensive blocks of balsa. And it's rugged.

The entire plane was built in one week. Only the fiberglass cowl took time. The mold took 24 hours to set up; the cowling within the mold only about two hours. Covering takes a couple of nights, and painting a week.

Out to the field we go with our 720-sq in Enya 60-powered, 6-1/2 lb, true-scale Jungster. It does every maneuver in the book with the greatest of ease, and it looks splendid. I've had any number of people come up and say: What's it a scale model of?

Fuselage construction is the same as building a rubber-powered model. It's a stick box with sheet balsa in front, and sticks in the back. Build two identical sides. Epoxy the plywood bulkheads and firewall vertically to one fuselage side and then epoxy the other fuselage side to the top of the bulkheads. Make sure all bulkheads are vertical to the sides. Let dry, pull the tail together and epoxy. Then epoxy in the sticks to complete the fuselage box. Make sure it's straight before the epoxy is dry.

Glue on the formers for the turtle-deck structure and add the stringers. Sheet the forward bottom half of the fuselage, add fairing strips where indicated, and the basic fuselage is completed. It takes about two nights to build.

Build the wing and tail feathers next. The tail is sanded to shape after all the 1/2 in sticks are dry. The wing is built conventionally except that it is best built upside down and as one piece. It also can be built as two pieces, joined. It has no dihedral (15 degrees of sweep); therefore, it can be built flat on the work bench. The spars and center section 1/4 in balsa splice can be built before the ribs are glued in place.

The ailerons are cut out after the wing is constructed. Position triangular jigs even with trailing edge of the wing. Lay the trailing edge sheets flat on the jigs. Lay down the main spar assembly and glue down all the ribs. Glue the top spar in place. Add leading edge, aileron spar, and vertical webs between ribs and through spar structure center section.

Sheet top of wing. Let dry and sheet bottom of wing. Don't forget to poke pin holes through the wood to mark where you should cut out the ailerons before you sheet the top trailing edge. Also, epoxy in the aileron horns before the trailing edge is sheeted. Add the bellcranks, rods, and wing tips. The servo hole can be cut out after the wing is covered. The wing and tail feathers can be built in two nights.

To build the fuselage canopy-hatch, cut out the 1/4 in hatch sides; glue the formers in place and let dry. While the hatch is drying, shape a mold for the canopy out of pine or poplar. Allow at least a half inch extra on bottom of the mold.

Sand the hatch sides to match formers and sheet the top of the hatch. Add the 1/4 in block to the back of the hatch. Add the 1/8 sheet in the cockpit area. Now, epoxy finish your canopy mold. Don't use dope as it will blister when the hot acetate is drawn over it, and remember, the canopy is only as good as your finish. After the hatch is dry, put the wing on the fuselage and carefully align it so it is square. Put the hatch on top and trim as necessary to get a good close fit. Hold the hatch in place and drill a 1/4 in hole through the hatch, wing, and wing hold-down block on the fuselage.

A 1/4" blind nut can then be inserted in the bottom of the hold-down block. The hatch acts as a clamp to hold the wing in place; therefore, no special beefing up of the trailing edge of the wing is required. A nylon lir screw works great to hold the wing and hatch in place. The forward part of the hatch is drilled with a 3/32 drill clear through into the top edge of the firewall. The firewall is then tapped with a 4-40 thread. Don't forget to put a plywood insert in the screw hold-down area at the front of the hatch and over the wing hold-down screw hole at the back of the hatch.

The canopy can now be formed. First build a vacuum box. Build an open top box a little bigger than the length and width of the canopy and about 2 to 3 in deep. Bore a hole in one end of the box, just the size to press a vacuum cleaner hose into. Be sure it's a close and tight fit. Fasten the canopy mold to a sheet of peg board (with wood screws from underneath), the size of the box and seal the top to the box. Make a frame from 1/2 x 1 in lumber that has the same dimensions as the box top. A vacuum box is now completed. Air tightness is not critical, but the box should be glued and nailed..."