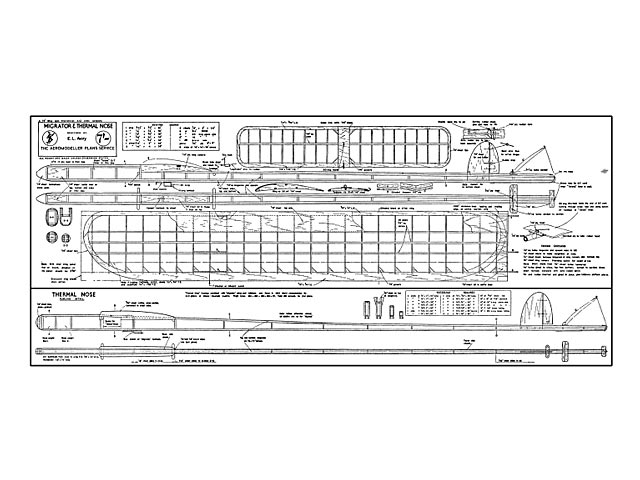 Quote: "WHEN ERNIE AVORY'S Migrator was introduced to Aeromodeller Plans Service in our November 1962 issue we were pleased to be able to quote its high contest performance in postal international events between the Vancouver (British Columbia) and Halifax (Yorkshire) model dubs. Migrator has enjoyed considerable popularity because it appeals to British modellers with its simple construction and many practical aspects, not to mention its performance potential.

At the 1963 World Championship for gliders, Ernie Avory failed by a mere nine seconds to gain an equal first place, this time with a development of Migrator, incorporating a shorter nose and longer tail moment. It is our pleasure to announce that Ernie has provided full details of the revised fuselage and small alteration to the wing construction which are now incorporated in the APS at no extra charge, as reproduced below.

Thermalnose fuselage was designed by the method of trial and error, though Ernie admits the errors were small. For a long time he thought he should employ a longer tail moment arm, and a slightly shorter nose moment, and presumed that this would require a much smaller tailplane. After experimenting with smaller area tailplanes he came to the conclusion that the Migrator wing and tailplane were near ideal. In using the longer tail moment arm one must be very careful in choosing the right weight of wood for the rear of the fuselage, the rudder and the tailplane. The secret of performance is in building as light a tail as possible. The model employed in Wiener Neustadt, had four tailplane spares and each of them weighed oz. The auto-rudder and dethermaliser lines are purposely kept on the outside of the fuselage. It is easier to replace a line in case of stretch or breakage.

If Thermalnose is built correct. ly according to the plan, and all flying surfaces are true when assembled, no difficulty should be encountered on the tow. Do not tow your model up too fast, one can walk Thermalnose to the top of the line. It is better to take it up slowly and so stand a chance of feeling a thermal pull on the way up. If this happens, the model will rise much faster, and the last trick is to lead the model round carefully into its natural circle, this helps enormously in not stalling the model off the line, with consequent loss of height.

By developing a series of models and flying them frequently to watch closely for various faults, then using past experience and knowledge to apply corrections, one is able to develop a stable design such as this one that is straight on the tow, and capable of winning contests. Thermainose has more than proved its capability in that direction!"

Update 6/1/2022: Replaced this plan with a cleaned up version (essentially redrawn from scratch), thanks to TonyP. 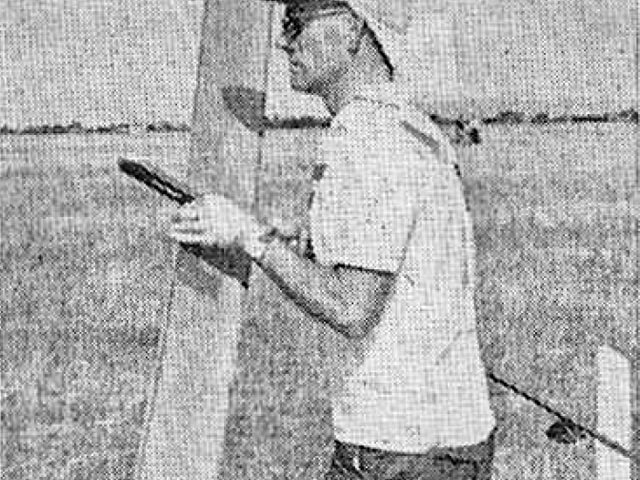