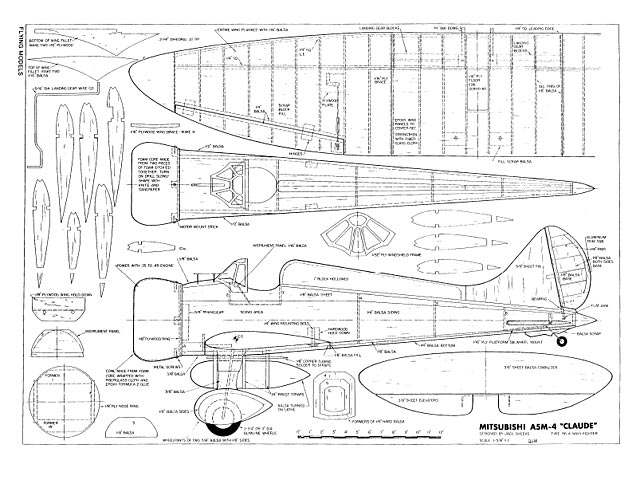 Quote: "The aircraft presented here is a Stand-Off Scale model of the Japanese Mitsubishi A-5-M4 Claude. It makes a very interesting and unusual R/C design, one not often seen due to its pre-war origin.

This aircraft evolved from a 1934 requirement for a machine capable of a speed of at least 218 mph at 10,000 feet and the ability to reach 16,000 feet in 6.5 minutes. The little ship outdid itself by attaining the speed of 279 mph, climbing to 16,400 feet in 5:54. It was quite naturally accepted for service right away. A final carrier version was still in service when the Pacific war broke out and it was not replaced by the famous Zero until the summer of 1942. Later a version of it came out with an enclosed cockpit, but the pilots didn't trust it, so it was replaced by the configuration which you see presented here.

All this just set the stage 45 years ago. There are no more wars for it to fight so what we are interested in here is its historical niche in the scheme of things and how it might perform as an R/C Stand-Off design. I think you'll agree it is a beautiful looking aircraft that will arouse interest in the field.

Construction has been simplified as much as possible so us old duds can handle the action. In the interest of performance, two deviations were made from the scale configuration. The wing was moved back 1 in to help achieve the proper balance point, and at that I had to add a ton of lead to the forward nose, so builders are advised to strive hard to keep the tail and aft fuselage structure on the light side to minimize nose ballast. Secondly, the airfoil itself was thickened as with many other models. A little more lift and slower approach speeds permit more practical flying when fields are smaller and flight experience less than it should be.

As the ship neared completion I became kind of worried about my rusty reflexes with radio. I could remember you did something with the stick but I forgot what. It's always a good idea when in doubt to have the sharpest flyer around trim a ship out on the test flight, things can happen fast and if you're not ahead of an untrimmed ship, then it's ahead of you. Bob Godfrey volunteered for the little chore, but the event was held off until Steve Ashby could be with us in order to utilize his telephoto lens on the action end. It would be nice to have some photographic proof the bird flew. After adding that lead the ship grossed out at 6-1/2 lbs. and some unbelieving ukie flyers kind of figured that had to be a stone.

Well, let's back up a little here and look a bit deeper at the design. The landing gear is pretty much scale, as is the wheel size. This means they are of the thin type, and with wheelpants on, grass is somewhat difficult to fly off. This made our verdant field a little wrong for the trial occasion and another delay while a contact was made with old friend Henry Hadler, manager of Brookside Airport. What are runways for anyway? Permission granted, at least for an adjacent taxiway, but that was all we needed. Thanks Henry, that was above and beyond the call of duty. Now all we had to do was coordinate the times when all three of us could make it and fair weather to boot. Bob's on the contest trail weekends, Steve's tied up 3 to midnight and I work days. That leaves mid-week dawn full moons. It took some figuring but we worked it out. Nervous is the word when the time is at hand. You've either got a beautiful new flying machine or a pile of parts again.

The moment was at hand. I cranked the new Super Tigre .46 to life and ran it a couple of times to make sure of the fuel draw in a vertical position. No problem, so I let it taxi out for Bob to get the feel of the responses, as much as can be experienced on the ground. One takes these matters of state by degrees. A little adjustment of the idle was made and Bob called for me to turn it loose, it was going to go this time. In short I should get my numb fingers off the thing, a mother hen has to let things hatch. Bob eased the throttle forward and the ship came up on its wheels. Steve was snapping off the film and I just sort of trem-bled. It lifted off smoothly into a climbing turn. The engine chose this moment to sag a little, but Bob found a new throttle setting that worked. It was up in the wide blue yonder.

No trim changes were deemed necessary to make it fly straight and level, but the ailerons seem to be very sensitive and should be kept in a more limited movement position. Take it a little easy on the stick. During this flight I had to get my paws on the box for a bit to do my thing. It's safer at altitude when you're not in practice. I did better than I expected, but when Bob took over again he put her through the paces - rolls, fast, slow, inverted passes. After a trial approach or two at the runway he set it down smooth as silk, though it tipped a bit and scraped its cowl on the final rollout. Almost perfect.

The ride home was full of visions of the flight. Scale birds are not supposed to fly so hot, but this one does, and did. If you'd like a somewhat offbeat warbird, then this might be the ship for you. It adds to the lineup at an RiC meet. After all these years the fellows are digging up the more obscure prototypes for modeling.

The Structure. Construction of a model at my house always starts with the wing and that begins with a selection of the choosing of the wood to be used. Two reasons: I'm not in love with wing wing structure so I want to get it out of the way and secondly, if it isn't straight when you're done you've got to start all over.

All the ribs were cut from 1/8 soft balsa and doubled with 1/16 plywood in the vicinity of the landing gear. The ribs are glued to 1/4 in sq spars on the top of the rear section of lower planking. Center-section should be built first. Gear blocks, plywood doublers and di-hedral braces are all installed before the top planking is glued on. The outer sections are completed with the ailerons, tips and any-thing else you might like before gluing them all together. The drop tank was turned out on

One easy foam pattern serves to start you in the cowling business. Text describes the lay-up. The wing is more conventional in structure. slightly naked at this stage. Note bellcranks to ailerons. Other shots scattered about the page capture the frame in various stages. You'll need good sanding blocks, ones that don't dig and scratch..."

Update 22/08/2012: replaced this plan with scaled up full-size version thanks to aeromeddler. Includes article text and pics. 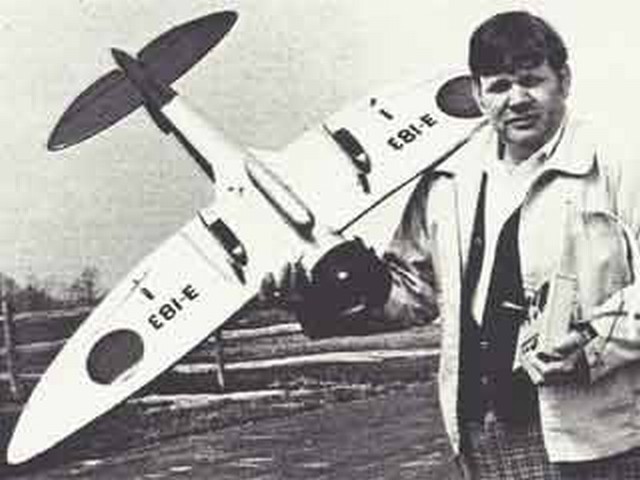 Plan ID 1282, Mitsubishi A5M4 'Claude' by Jack Sheeks. A simple club-size scale model, ideal as a first scale plan -build, but unfortunately the plan does not show up as the correct size. I used Adobe Reader 10 to print it out 'tiled' on to A4 paper at 2.57 times original size then spent a happy evening with a roll of Sellotape to reproduce the plan. Winter project sorted!
Eck - 20/08/2012
The article for this beautiful model was published on the September 1979 issue, just in case the date wants to be added to the datafile
Lou - 21/09/2019
Got it, many thanks Lou.
SteveWMD - 22/09/2019
Add a comment