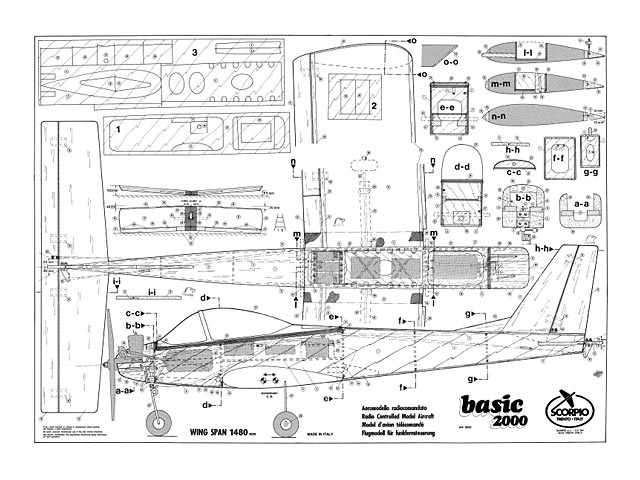 Note this model used a foam wing, so no ribs etc are shown. There are some cross sections shown which might help in cutting a foam wing from scratch.

Quote: "Hello, Thank you again for your website. Attached to this email the pdf file of 'basic 2000' by the brand 'scorpio'. In Google you can find pictures of the model, if needed. Have a nice day! Alberto B"

The opportunity to review the Basic 2000 came at the right time, as I did not have a good durable model to take part in the 'Fly for Fun' competitions being organised by the new Mid-West area of the SMAE. The manufacturers describe the model as being a 'first low wing trainer', but as you will read later, this is really a wolf in sheep's clothing.

First Impressions: Upon opening the box, I was very impressed 'with the contents. The fuselage is virtually complete, the wing panels ready veneered, and a mass of other goodies including a beautifully moulded, blue tinted canopy. I was surprised to find that the inners for the control snakes were not included. Also wheels and a fuel tank have to be provided by the builder.

A highly detailed full size plan is included, and two sets of building instructions. One is in picture form and the other written instructions, giving a blow by blow account of the building procedures in four languages including English. A full list of the 67 components is incorporated. You are even told which glue to use at each stage of construction.

Building the Fuselage: As already described, the fuselage, which is a composite of ply and balsa, is ready built. The engine bearers and radio and servo trays have to be added. Some care is needed in fitting the canopy. Fitting the tail surfaces and steerable nose leg completes the structure. Provision is made for securing the wings with bands or bolts. Building the Wing If you have built a model with foam wings before, you will have no trouble with the Basic 2000. Leading and trailing edges have to be added, the panels joined, and the servo mounting box lined out. The wing is supported by a glass fibre bandage. Slots are already cut in the underside of the wing to receive the undercarriage mounting blocks.

Covering and Radio Installation: Tissue is provided for covering the wings, but I decided to use Solar-film, because it provides an attractive, quick, fuelproof finish. Radio installation is a doddle. Removal of the canopy gives completely open access to the fuel tank and radio bays. Other manufacturers of kits for newcomers to the hobby should examine the Basic 2000 carefully. It is a first class example of accessibility to the radio
RC Model World, January 1985

The Basic 2000 is extremely unusual in that all the radio control equipment, etc is reached by removing the cockpit cover (left). Removing the wing reveals only a wing seating (above).
and fuel systems. The control throws should be set as shown and the CG at the furthest foward position shown on the plan. I was surprised at the finished weight. Complete with OS40 and Cotswold UHF radio gear, the model came out at 41b. 3ozs.

Flying the Basic 2000: The Basic 2000 was test flown at the Cirencester Model Club's competition day at RAF Kemble. The conditions

were perfect. No wind, a clear sky, and scorching hot sun all day. Range checks were carried out with the engine running, and ground handling tests were passed with flying colours. The convenience of a steerable nose leg has to be experienced to be appreciated. The moment of truth had come. The throttle was opened, and the model went off down the runway at an incredible speed. It climbed away until it was a small dot in the sky. No trim changes were necessary.

I was amazed at its performance. The Basic 2000 will complete every manoeuvre in the book. It will fly knife edge from one horizon to the other, and with a standard OS40 it will climb vertically out of sight. The engine was throttle back to assess the low speed handling. The anti stall devices really do work. When attempting a stall, the nose just drops slowly and the model recovers its flying speed almost immediately. Landings are a delight due to the stable characteristics of the thick wing section. On the first flight the CG was at the rearmost position shown on the plan, and the elevator was rather twitchy. With the CG brought forward, however, a nice elevator response was achieved.

Summary: Scorpio have certainly provided a versatile model here. It is attractive in appearance, easy to maintain because of its excellent accessibility, and stable enough for a 'first low winger', yet it can stretch an experienced pilot to his limits. This is definitely a model for those club comps. The Basic 2000 is widely available from MacGregor stockists at a price of £44.95." 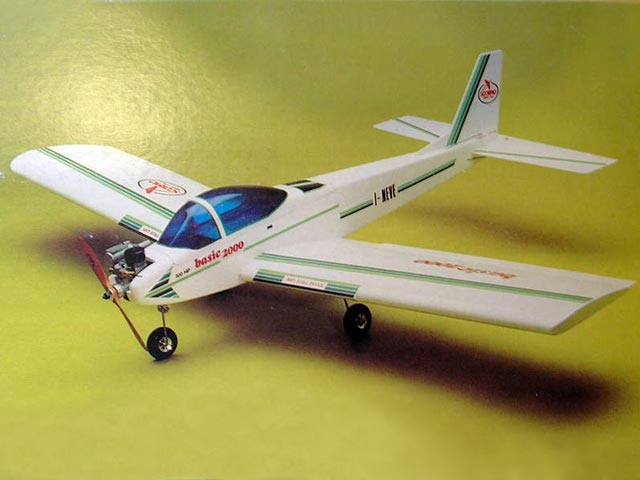