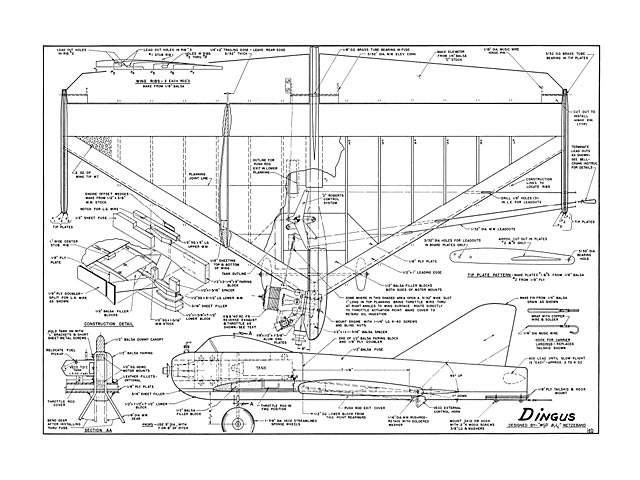 Quote: "The Dingus, by Bill Netzeband. Fine-flying delta for non-scale Carrier events. A real fun ship, despite its novelty.

THE Dingus was designed so I could compete with a delta-wing airplane in the SCCA Non-Scale Carrier events. The Southern California rules were adjusted to allow the Sterling Skyshark, so minimum wing area was established at 200 sq. in. This also allows the flyers to get a 'feel' closer to Scale Class I, rather than nursing around a 300 or 400 sq in butterfly at low speed.

I didn't depart from the norm, just to be different; the delta will fly slower than a conventional airplane in a safer manner. The delta is stable at angles of attack up to 45 degrees, because it develops high energy vortex flow after reaching conventional stall angles. During vortex flow conditions, the drag is very high allowing the engine to be run from one-half throttle to almost full open. Therefore, slight engine offset becomes effective in maintaining line tension and control force, since the engine thrust is now large enough to be useful.

Slow flight under 20 mph is just as solid as full speed. The problem of using a stable CG (center of gravity) location and being able to hold the nose high at slow speeds was solved by designing a relatively huge, slotted elevator. The slot allows high-pressure air from the bottom wing surface to flow over the elevator, keeping it working all the time.

Fact is, the Dingus is the only competition airplane I own that is any fun to fly. Everything else is bred to such a fine peak that one doesn't just go out to fly them.

The Dingus, on mild fuel, is a kick just to horse around and is tough enough to play with. Comes contest day, bolt on a 9-8 Rev-Up prop and tune the needle for K&B speed fuel and you're up to competition peak. We built our own throttle to make the K&B 40 Front Rotor operate on draw fuel feed, since SCCA rules ban pressure fuel systems. We used an old, out-of-production Dynamic AM-3 intake throttle, coupled to an exhaust slide, which gives a very broad-range throttle (16,500 to 2,000 rpm).

The same effect can be obtained with the K&B RC 40 engine with an exhaust slide added. To install, you must rotate the exhaust stack 180 degress and turn the intake throttle around..." 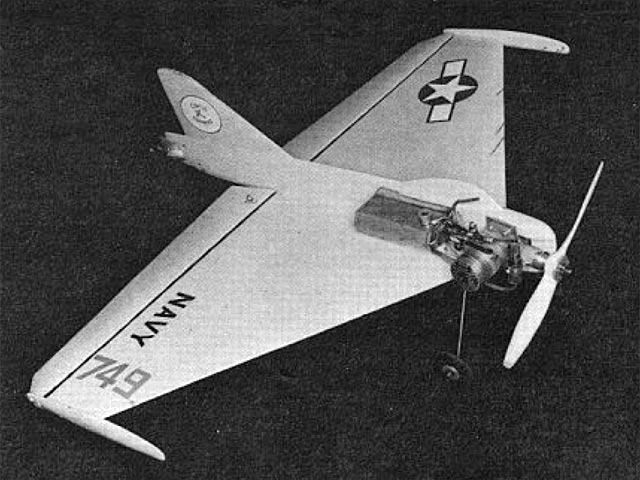