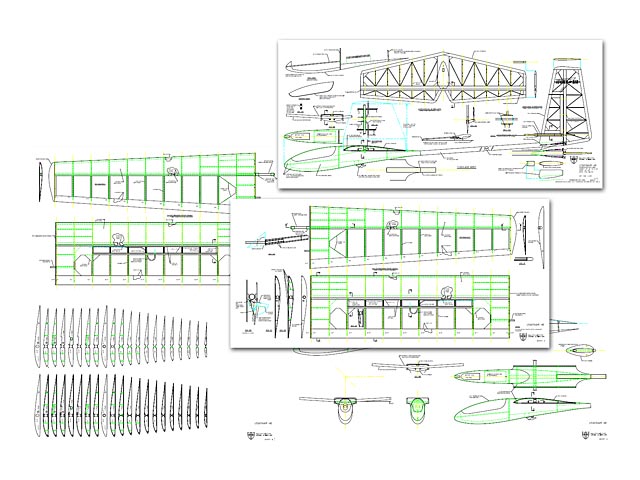 Down in Texas they do everything in a big way, and Cecil Haga from Arlington is responsible for designing the 140 in Legionair glider.

It builds into quite an aircraft. While all the curved and fabricated parts are supplied, it is left to the builder to supply the basic flat sheet wood and strip stock. Fair enough, this keeps the kit cost to a more reasonable figure on an aircraft of this large size. The design features super-sized spoilers, an easy to transport wing, removable empennage and a graceful planform to match its fine performance. Each kit has a serial number which they suggest you put on the vertical fin. Mine was #91.

While there are building notes on the plans, no formal instructions are included. For this reason I would only recommend the Legionair for reasonably experienced modelers.

Now that you have a bit of an idea as to what the kit contains, I will relate my experiences in transforming it into a beautiful glider

The Fuselage: Assembly of the fuselage is the most involved part of this model. The right and left hand fuselage sides must be fitted around a plywood crutch system. Quite a bit of sanding was required before the two sides would fit perfectly. The seam around the fuselage and the step where the aluminum tail boom meets the fuselage were blended in with a mixture of 5-minute epoxy and micro balloons. Two coats of K&B Super Poxy Primer were brushed on and sanded with #400 wet sandpaper. Finally, one coat of white K&B Super Poxy was sprayed on with an airbrush.

The radio compartment is very tight and I ended up mounting the radio switch on the inside of the canopy. Plans call for 6 to 8 ounces of ballast. To get 8 ounces of lead into the tiny nose where it would do the most good, I held the fuselage vertically while submerging the nose in cold water. I then poured 8 ounces of lead in the nose. There was no damage to the fiberglass.

The Tail Surfaces: The tail surfaces are straightfoward construction and should present no problem. Sand them thoroughly and keep them as light as possible.

Wing Assembly: The wing structure is also straightforward. Designer Cecil Haga recommends MonoKote for the covering material. As I chose to cover my Legionair 140 with orange silk, I made a few additions to the wing. I added a 1/2 x1/4 in strip of balsa at the rear of the spoilers. Also, I boxed in the trailing edge with 1/16 balsa and added 1/2 in triangular gussets to the wing ribs. My club's flying field on Long Island does not lend itself to hi-starts and winches very well, due to the snaggly vegetation abounding. As a result, most of my glider flying is done via the power pod method, though it has been flown on the line as well.

The power pod I use with the Legionair is of my own design and is not included in the kit. Each side of the pod was made by laminating two pieces of 1/32 plywood with 5-minute epoxy. Four maple blocks were epoxied inside the fuselage at the wing rib section. The pod is then attached with four screws.

I used an .09 Webra diesel with an 8-4 prop for power. In my opinion, a power pod is about the safest and easiest way to fly a glider, and it does not really hurt the performance to a noticeable degree as I have had flights of up to 1-1/2 hours using a power pod.

Flying Notes: Complete trim and flying instructions are included in the kit. My first flights were with the power pod and with the CG set as indicated on the plans, it flew perfectly with no trim adjustments. The rudder response was very good, and on the landing approach there was no tendency to stall right before touchdown when you enter the ground turbulence.

The power pod was then removed and several flights were made launching with a winch. It handled like a kitten, climbing almost straight up on the launch, with no tendency to oscillate. The glide is fantastic, and it will climb on the slightest thermal current. It makes very flat turns, enabling you to stay in a small area of lift. To sum it all up, the Legionair 140 performance is top notch and competitive with the very best of gliders.

The Legionair 140 is designed for FAI competition, and kitted by Legionair Sailplanes, 3017 Norwood, Arlington, Texas 76013. The span is 140 in, with 1325 square inches of area. Wing loading is 7 ounces per square foot. Price at this writing is $89.95 for the partial kit and a somewhat smaller Legionair 100 design is offered for a $74.95 tag. Beautiful aircraft, with outstanding performance! The Legionair 140 was a winner at the 1975 SCAR Nats." 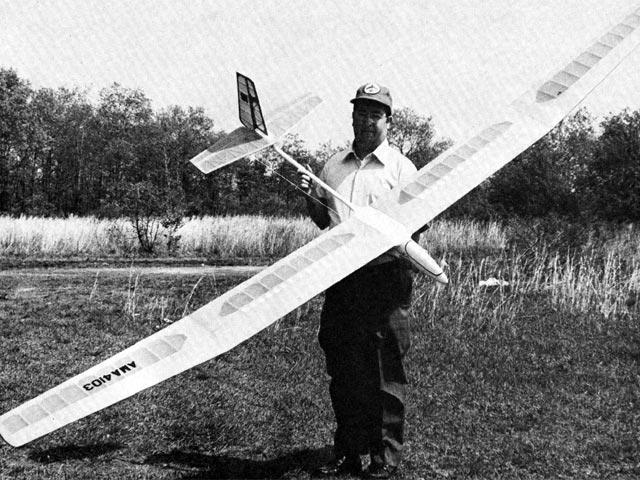