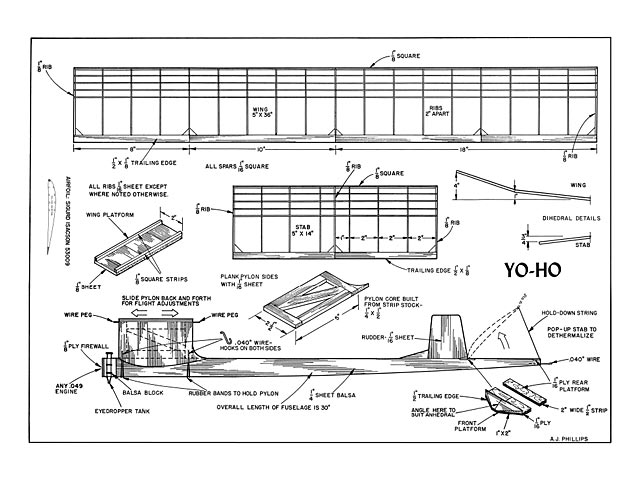 Quote: "Just how important are fancy curves and so-called streamline shapes? We say that these tricky planforms add eye-appeal but not flight performance. Often they make building more difficult and sometimes they interfere with sound design.

The Yo-Ho is a design which eliminates everything but the bare essentials of a pylon gassie. It's simple to build because it involves no complicated structures. In essence, it is the ideal contest model because it is rugged, simple to repair at the contest field, and embodies a minimum of troublesome gadgets.

One feature we'd like to discuss before we talk about construction is the movable pylon. Because of varying materials, the balance of each model is always different from those built previously. This difference in balance results in various wing-angle settings, which in turn alter the flight path of each particular model.

Going back to the days of yore, we've copied the old rubber-model adjustment - moving the wing. It is possible to keep the same wing-angle setting and trim out flight differences by moving the wing forward for dives and back for stalls. Since wing-angle changes affect powered flight more than any other cause, this adjustment proves to be more consistent. A definite advantage for contest work.

PLAN: All parts are dimensioned so that you can scale up the plan easily. There are no curves to worry about, just follow the straight-line layouts as indicated. The rib pattern is full size and used in both the wing and stab. Note that the top edge of the fuselage is a straight line and that the shape of the lower edge is not critical.

FLYING SURFACES: The wing and stab are both built flat and it is wise to build them both at the same time. Pin the trailing edges to the building board first. Cement the ribs in position spacing them 2 in apart as indicated, except for the stab center ribs which are 1 in apart. The 1/8 square leading edges are cemented in place and the parts are left to dry.

Cut the wing apart at the dihedral breaks and cement the pieces so that they comply with the dihedral dimensions shown. The stab cuts apart in the middle and is anhedraled (inverse dihedral).

The 1/16 spars are added last. Take care that they are not fitted too tight and are not bowed under strain. Apply a liberal amount of cement to each rib, spar and dihedral joint to strengthen the structures. Small 1/16 sheet balsa gussets should be added at each dihedral break before the wing is covered.

Lightweight tissue is the best material for these small 1/2 A models. Apply the tissue dry and cover only one panel at a time. Try to put the tissue on smooth and don't worry about it being tight. After the wing and stab are covered, spray them with water using a Flit-gun or Windex sprayer. Don't touch the wet tissue or permit it to touch rough surfaces, as it is very weak at this stage. Allow it to dry naturally. Use three coats of clear dope followed by two coats of fuel proofer to finish the covering. If you prefer fuel-proof dope, use five coats. Color trim is optional and adds nothing to the flight performance.

FUSELAGE: Cut this from a piece of straight-grained tough balsa which is not too heavy. Sand it smooth and then cement the firewall and balsa blocks in place on the nose. The blocks are cut roughly to shape before they are put on. Final shaping is done with a carving knife and sandpaper. Cement the stab platform in place and you're just about ,done. Note that an eye-dropper is used for a tank. Make a slot to mount this in one of the balsa blocks. To finish, add six to seven coats of fuel-proof colored dope.

RUDDER: This is cut from 1/16 sheet balsa and is sanded to a symmetrical shape. It can be cemented in place before or after the fuselage is doped. Take care to align it parallel with the fuselage sides.

PYLON: This is built up from 1/4 x 1/2 strips and is planked on both sides with 1/16 sheet balsa. It should fit snugly on the finished fuselage. Thin paper can be cemented on the inside of the pylon to make it fit tighter. Add the top platform, wire hold-down hooks, and you're all set to dope it. Six to seven coats will do.

GENERAL: That just about winds it up. Don't forget to add the dethermalizer hooks because you'll want to bring Yo-Ho out of the high-riding thermals. We've left the wheel off since most local contests haven't ROG facili-ties. Should you want a gear, we suggest a single-strut undercarriage, with a 1 inch wheel, which attaches to the rear of the firewall. Adjust the stab anhedral so that both stab tips touch the ground, providing three points (the stab tips and the wheel) for ground suspension. Last but not least, add your AMA number if you plan to take a record.

FLYING: Adjust the model to fly right-right - right power-turn and a right glide-turn. To obtain this setting, offset the engine for left thrust. Start by putting two washers under the right edge of the engine backplate and then vary to suit until you have a wide right turn under power and a tight right glide. Properly adjusted, the Model should make one turn in ten seconds, under power. High pitch props also help obtain this adjustment. Try some 6x4 and 6x5 props. Settle for the one which gives best results." 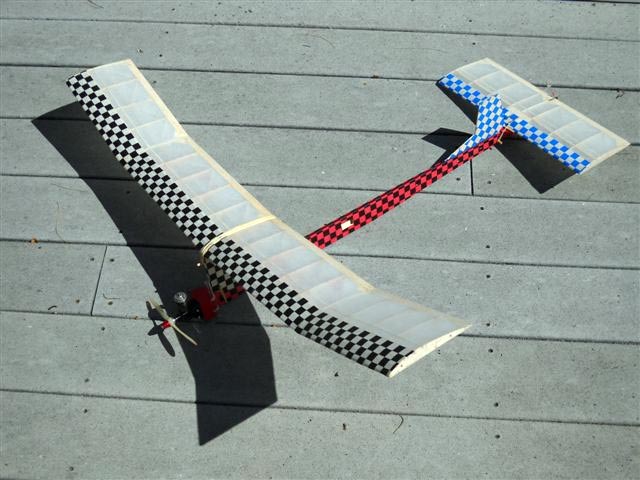