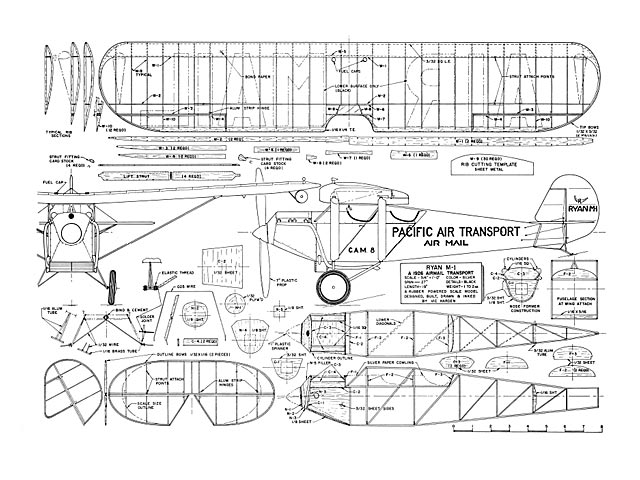 Quote: "Ryan M-1 Mailplane, by Vic Harden. From this design the Spirit of St Louis was developed. Rubber-powered model has details galore for the expert and clear instructions for the beginner.

BEFORE 1926 few people had seen an airmail plane up close. But about that time the government began to award contracts to private firms to carry the mail. This was the real beginning of our present day airline companies.

Along with designs by Douglas, Boeing and others, was one built by the Ryan Airlines School of San Diego. The aircraft performed well even with lower horsepower and a heavier Hispano-Wright engine, in place of a Wright J4 engine originally specified. Known as the Ryan M-1, the plane later became the M-2. Some were built with the Hisso, some with the J4, for airline com-panies in the West.

Then Lindbergh picked Ryan to build his airplane. As history records he was successful in 1927 on a long and lonely trip, from New York to Paris. His Ryan number 29 was a descendant of the M-1 and M-2. The similarity was evident between the M-1 and the NYP Ryan used by Lindbergh.

Our rubber-powered model is the Hisso-powered version. It provides more nose length, giving a graceful and smooth appearance. A number of photographs exist of this version of the M-1 and M-2 as well as the J4 version. The American Airman Magazine, Vol 4, No 7, of July 1961, shows two M-1/ M-2 Hisso versions. General Aviation News Monday, March 24, 1969, carries a picture of the M-1 now on display in San Diego.

You can build a full-detail-scale type, or a scale-outline type. Both types require about the same effort and both will perform well. My model was a scale outline variety used to develop a larger diesel-engined job. The amount of detail will affect the final weight.

Start with the wing since it is the most difficult part. Using the patterns for the spars, front and rear, aileron and false spar and centerline splices, each cut from 1/32 straight-grain sheet, make two of each except the centerline splice pieces. The rib template is cut from light gauge aluminum or tin. Use the template to cut 30 upper rib caps from 1/32 straight-grain sheet. Each rib should be 3/32 wide. In addition, cut 1/32 x 1/8 strips for the lower caps from the same material. The leading edge is 3/32 sq. and the trailing edge is 1/16 x 1/4.

Trace the shape of the tip on a piece of cardboard about 1/16 thick. Cut out at the inside line and use it to bend the 1/32 x 3/32 laminations to shape. Soak the wood in hot water a few minutes, then bend it around the cardboard form, holding the strips in place with pins pushed into any soft material used as a flat base. Use an oven at 125° F to speed up the drying time to a half hour.

Two sets are required. The wing structure can be set up over wax-paper-covered plans. Trim the forward ends of the lower rib caps to a 45-degree angle and assemble them in place with the spars, trailing edge pieces and leading edge strip. The upper rib caps are trimmed to match at the leading edge with a 45-degree angle cut, and to fair at the trailing edge on the lower rib cap. Build the wing, including the ailerons, as a single unit. Cut away the ailerons after the tips are completed..." 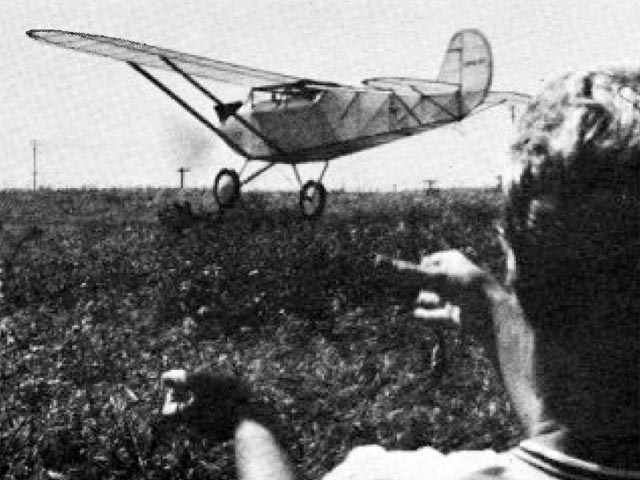