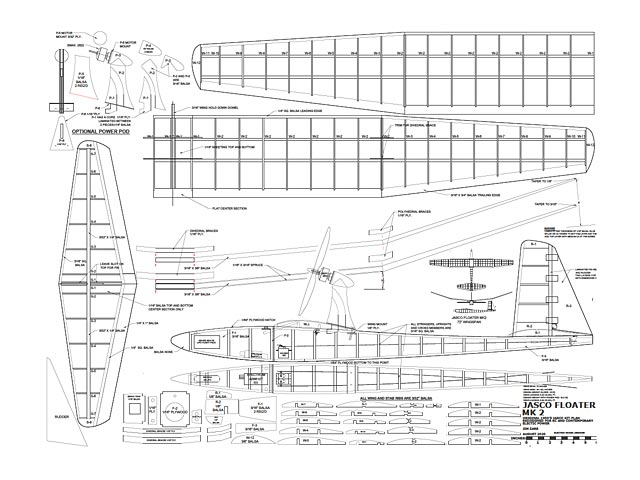 Quote: "Steve, Check out VGB Jasco Floater in RC Groups [see datafile] starting August 22, 2020. I created a cad model for a rare version of the Floater glider from the 1950’s. This is quite different than the 1940’s version. A pdf of the plan and photos are included in the RCGroups thread."

Quote: "I have completed a set of working drawings for the Jasco Floater MK 2 as I have named it. A PDF is attached.

The fuselage reminds me of the Jetco Thermic 50 from the 1960’s. That was one of the first free flight towline gliders that I built and flew. The design will include provisions for both high start and motor placed in a removable power pod.

Fuselage: The fuselage design is conventional. It uses 3/16” sq. balsa for the fuselage uprights and stringers with a little 1/16 and 1/64 plywood in key areas. I am not sure what the hatch will look like until I see where the battery needs to be placed for balance. I am planning on bolting the wing to the fuselage so there is a plywood former at the leading edge and a plywood hold down at the trailing edge

Pylon: I have used the pylon design shown on the plan on several previous models. It work well with the Emax 2822 motor with its’ round mounting bracket. The attached photo shows the pylon on a 72” Midwest Jetstream. It is designed such that the motor wire leads are run through the pylon into the fuselage through a rectangular slot in the wing. The pylon is held down by the bolts that fasten the wing to the fuselage and is easily removed for high starting.

Wing: I was able to size all of the ribs. I will use 3/16” balsa spars. I did plan on adding 1/16” x 3/16” spruce cap strips to the front spar in the center sections only. I plan on using a high start so I don’t want to fold a wing. In order to easily fit the pylon, I chose to create a flat center section. This deviates from the original but will work very well and be easier to make. The original plan shows a machined leading edge. I will use ¼” sq. balsa. The trailing edge is 3/16” x ¾” balsa.

Stab: The stab is double tapered. I scaled all ribs and will plan on using elevator only the left side. This should be adequate for normal flying. After all this was a stable free flight glider.

Rudder: The fin and rudder will be 1/8” thick. I will laminate two 1/16” rudder halves and the fin rear post with the ca hinges embedded between them. This works great on thing surfaces and allows you to sand the completed rudder with the hinges in place.

The model should weigh in at about 16 to 18 ounces ready to fly. The Emax motor can easily provide nearly 130 watts. I’ll choose a small prop to get the watts down to 80 or 90." 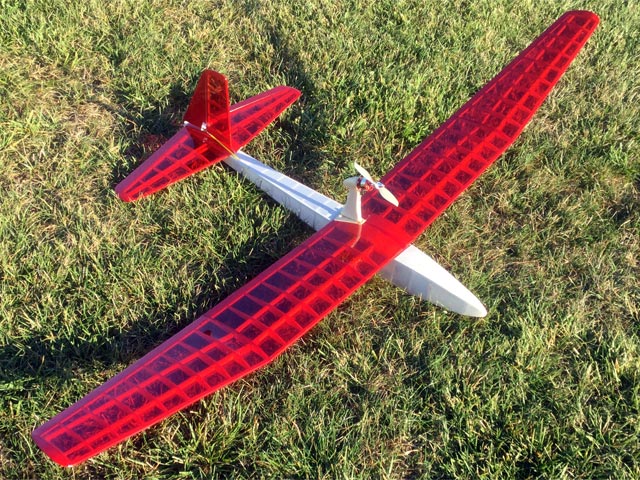