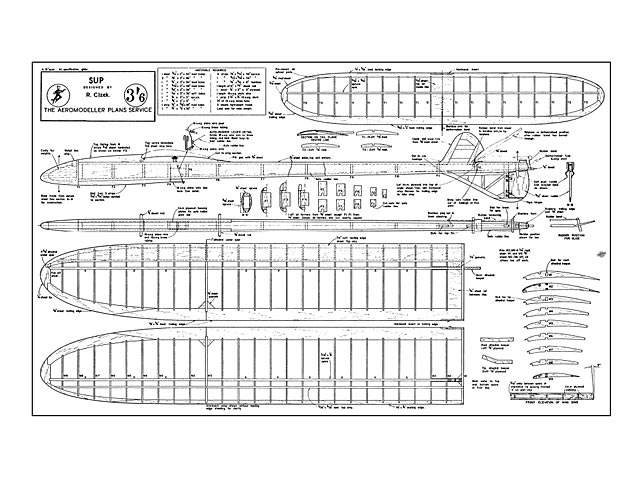 Quote: "A Czechoslovakian A/1 glider with a pedigree. Sup, by Radoslav Cizek.

DEVELOPED OVER MANY YEARS by Radoslav Cizek, Sup is a direct descendent of his Wakefield Cup winning XL-56b (oz9422) as flown by team mate Frantisek Dvorak in the 1959 World Championships. Basically a simple model, Sup has almost A/2 performance from an A/1 size airframe, owing a lot to its Wake-field wing.

Both wing and tailplane are modified versions of the XL-56b as published in April 1958 issue, the tailplane having some area removed from the centre section to meet requirements.

In the last contest entered Sup won with a score of six maxes plus 103 seconds, totalling 823 seconds. It should be remembered that the A/1 max is two minutes. Sup's average flight time has been 130-140 seconds, this being much the same as many a British A/2 in still air.

Commence construction by cutting the fuselage top from 1/8 sheet and marking former positions in soft pencil (2B grade). Cut out formers and cement to fuselage top: Construct the Auto rudder as shown by bending the 18 swg tow hook and securing to former F4. Then bend the auto-rudder trigger and solder and bind to the 16 swg brass tube. Insert the bearing rod in the two 1 mm plywood bearing plates and cement whole assembly into fuselage.

Cement both 1/8 fuselage sides on at the same inserting the auto rudder line, and then the fuselage bottom. Note that cut-outs for upper and lower fins should be made before the fuselage is assembled. Cement the three strips for the nose skid together and when set cement to underside of fuselage. The soft aluminium rudder limit bracket should now be fixed into the extreme rear end of fuselage as shown and the section fitted with block balsa. Drill holes for dowel rods but do not cement them in until the fuse-lage has been sanded down.

Make nose weight box from three sheets of spruce as shown cutting the ak ing centre out. Cement layers together and pre-cement to nose former F1. The top fairing should be cemented on in 1/16 laminations. Great care must be taken to ensure the wing cut out is exactly to the section shown, and flat. When all fuselage joints are dry, sand down and cement dowel rods in.

Wing construction is a little different, in that all rib bays marked with an 'X' have 3/32 webs be-tween the spars. Start by cutting all ribs from 1/16 and 1/8 sheet as shown. Pin leading edge over plan and tilt by packing up in. on rear edge. Pin 1/8 square strip at the front of the leading edge on plan and then cement ribs to leading edge. Cement the two top spars in next, and then the dihedral braces. Sheet top of leading edge and remove from plan. Next add trailing edge and insert 3/32 webs at rib bays marked 'X'. Add lower spar and sheet centre section to complete. Sand leading edge and trailing edge to section then add gussets. Wing tips should then be built in the same manner and joined to main wing. When complete sand all over and add hardwood leading edge inserts, checking that the 1 in and 4-5/8 in dihedral measurements are correct.

The tailplane is constructed by the same packing method, the only difference being the insertion of a bamboo dethermaliser arm.

Check for warps, rub model down, and finish by applying one coat of sanding sealer all over. Rub down and then cover with lightweight tissue. Three coats of thinned clear dope should then be applied all over, and the fuselage colour doped if required.

Bring the centre of gravity to the position shown by adding lead shot in the nose box. Test fly on a short tow line and trim by altering the tailplane incid-ence. Never forget to light the dethermaliser fuse or you may be saying goodbye to your Sup sooner than you expect!" 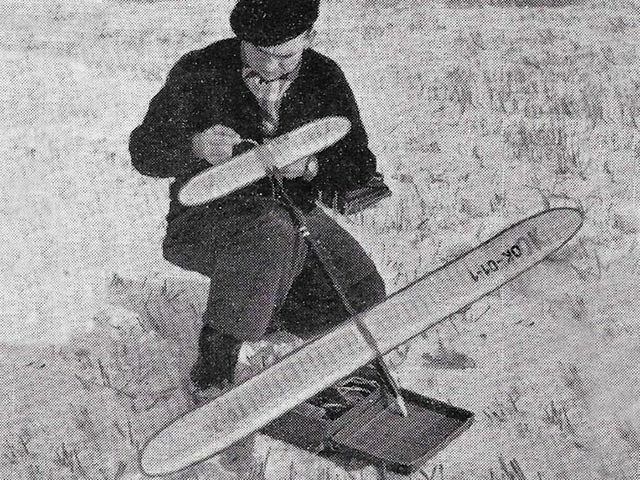