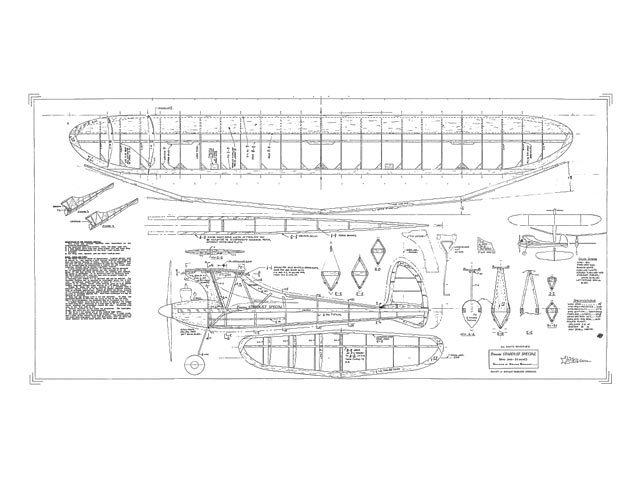 Quote: "This is the original Stardust Special plan by Don Broggini. Most plans out there are derived from the scaled up electric plan done by fellow Long Islander and Grumman employee Tom Hunt.

The Stardust is a modular design. There is a 50 inch wing and a 55-1/2 inch wing (there was also a 60 inch but Don never sought SAM approval for a third wing option). There is a short fin and a tall fin. There is a standard fuselage and a long fuselage. These may be combined any way the builder/flyer chooses. Typically, the freeflighter will choose: long fuse, short fin, short wing. The R/C assist/Texaco flyer: short fuse, tall fin, long wing.

The NACA 6409 airfoil was selected after observing Hank Struck's Record Hound (oz11260). The fuselage was originally from the Diamond Demon (oz8646) with the rear pinched in to match the narrower SS wing cord. It then morphed into a pylon/cabin hybrid like the Spearhead (oz2078). The F7 former gives an idea when the windscreen was prior to it finally becoming a full-fledged pylon model.

The engine determines the crutch width. The model was designed for a single wheel, but two wheels are an option.

Only this plan and my hours of conversations with Don give any indication as to how the wingtips were supposed to be constructed. Most Stardusts have had their wingtips built in the manner of a Playboy (oz7835), ie tips are pinned down and top spars are bent down to meet them. On the Stardust, the top spar does not bend from the dihedral joint. Rather, the tip is angled up slightly to meet it. The aerodynamic benefits may be negligible at the Reynolds numbers but it makes the wing a lot easier to cover."

Attached supplement file is the page of notes that Don supplied with the plan. 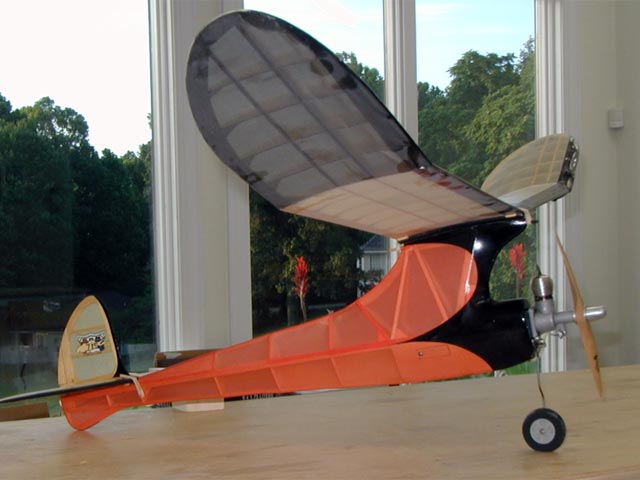 From the designer of many tailless models such as the
Sky Wing https://outerzone.co.uk/plan_details.asp?ID=3636
Biffy - 08/02/2021
I have been looking for this plan for many years, so thanks so much! It's easy to find a plan for the scaled up RC versions, but not so for the original free flight model.
Simon Blake - 08/02/2021
Probably the best flying old timer ever. If possible, build turbulated wing. You’ll have to beef it up but it flies MUCH better.
Mel Quinn - 09/02/2021
The Stardust Special owes its popularity in Australia to a meeting between Peter Bennett and Larry Davidson, builder of the SS pictured. For more information see page 3 of: http://www.antiquemodeler.org/sam_new/news_letters/assets/thermaleer-1999-05n060.pdf
Tom Ryan - 09/02/2021
Add a comment