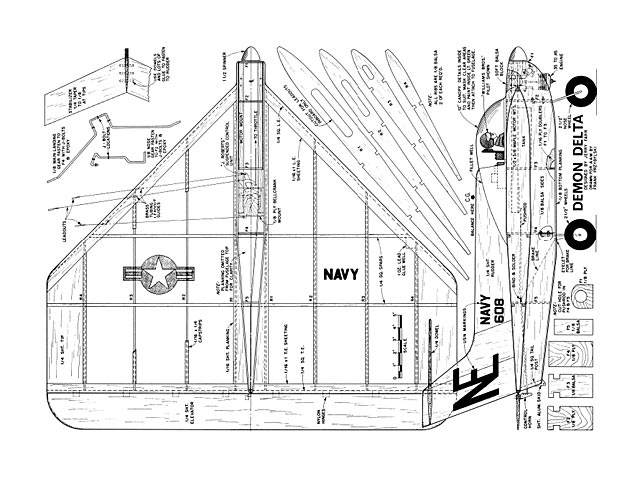 BACK in 1963 Dale Nutter and Austin Leftwich were flying some very different R/C ships. The 'new' three-cornered diapers were capable of great speed and maneuverability. A modeling buddy, Jack Kimbrough, and I assumed that if it worked for R/C, it would be much easier on lines.

A true Delta was constructed (like the ones being flown in R/C Pylon), and we found it to be fast, but not so maneuverable. This plane was relegated to sport flying and parking on the flight line to attract questions from curious spectators. Several years later, Wes Moore of Irving, Texas and I worked on a Delta, attempting to hit on a competition stunt formula. We wanted something different in appearance, yet competitive. It was a complete flop.

The present aircraft has served a two-fold purpose. First, it has proved to me that a delta-winged aircraft, with its high ratio of wing area to frontal area, is fast. Second, while comparing the handling in the same circle with Ed Thomas and his Coyote stunter, we not only found the Delta as fast with twice the wing area, but discovered it could 'stop the show,' and draw a crowd.

This aircraft serves no useful purpose if you are a 'dyed in the wool' trophy hound. If, however, you are trying to get some city parks department to build a flying site to arouse public interest in modeling, this plane is for you or your club's demonstration team. Resembling a modern fighter, it will attract onlookers and possible future modelers. If you take care with details, you will be surprised how many modelers will ask you, 'Hey, what's that a scale model of?'

In the air this ship is great! You can use throttle, wheel brakes, a smoke bomb, or tow a streamer for an aggressor pilot. All this and it is still easy to fly and fast (about 75 mph), but with more than 800 sq. in. of wing, it's groovy. Low speed is only about 30 mph. It will go slower, but not in this West Texas wind. Demon Delta will do wide loops and fly inverted, but alas, a stunter she is not.

The construction is simple, but does require a lot of wood. Therefore, a club project may be in order.

Cut the fuselage sides from straight-grained 1/8 sheet balsa 4 in wide, and posi-tion 1/2 x 3/8 engine bearers on the center-line. Cut the doublers, then use Titebond to put the whole thing together. While that is drying, cut the 1/8 plywood firewall and F-3. Cut the rest of the formers. Drill the plywood pieces for landing gear mounting, then rubber-band the fuselage together. No glue yet.

Slip 1/4 sq spars through the cutouts in the fuselage. See that it is straight. Now glue. When dry, block in the nose, but do not sheet. Use a sheet aluminum tailskid and some fiberglass resin in the fuel tank area and in the engine room. While on the fuselage, let's discuss fuel tanks. You can use Veco T-21 D or E, but I used what I now consider to be one of the best pre-made, homemade tanks around, a Ronsonol lighter fluid can. It is 4-1/2 oz and strong. Pop off the plastic cap and solder a patch over the opening. Install vents and pick up tube. Use epoxy and J-bolts to install the landing gear.

Wing ribs are cut from 1/8 sheet balsa and positioned between the spars at proper intervals. You can use rubber bands at the spar tips to secure them for gluing. Pin the 1/4 sq trailing edge in place. Make sure the wings are not warped. Double check, glue it well..." 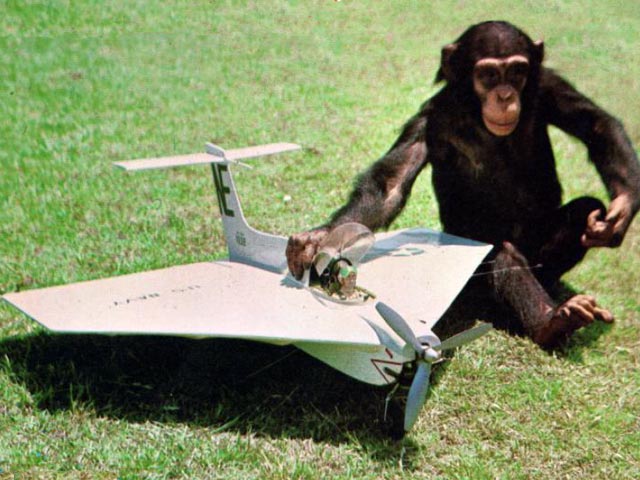