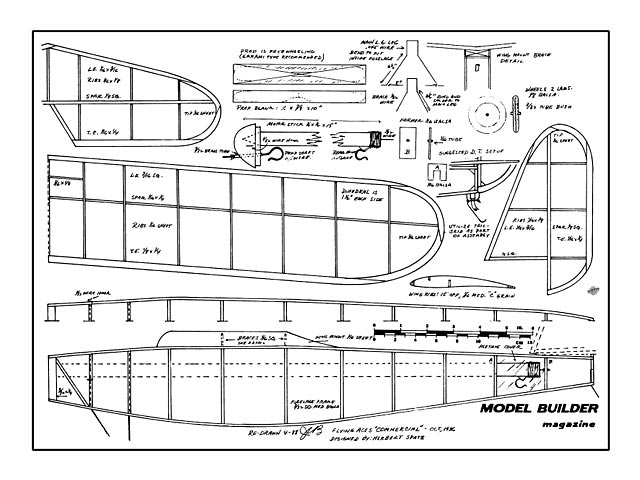 Note first published in Flying Aces 1936, this here is a later redrawn plan in MB.

You don't often hear the word 'commercial' these days when referring to a model airplane, unless the conversation includes at least one genuine old time modeler, and the discussion is about rubber models. John Blair, of Warne, North Carolina, a frequent OT plan contributor, sent us the following note with this month's subject:

For those who may feel that the Pacific Ace has had things its own way for too long, here is an alternative: the Flying Aces Commercial. This is one of those long-legged, ungainly crates that is so ugly it's cute. However, in the words of the construction article in the October 1936 Flying Aces, the plane is a 'dandy flyer'. The original model is said to have disappeared into the clouds after six minutes.

The plan is presented here much as originally drawn; no gussets, braces, etc. A suggested DT setup is included, otherwise any beefing up of the structure is left to the individual builder, which is the way we like it anyhow. The reference to a particular model as a 'commercial' or a 'job' first crossed my ears in the mid-thirties, coming from the late Steve Kowalik, to whom I have many times credited my start in building model

airplanes. Well, 'job' was simply his single-word reference to most any model, but 'commercial' seemed more or less to imply a sport rubber model, sorta scale-like, but smaller than competition models. I dropped a note to John, asking his opinion on this, as well as to whether he used the motor stick as shown on the plans. We'll finish this article with his response:

Got and enjoyed your note. However, you may have done the wrong thing by asking me questions. I have been accused of delivering a lecture on clock-making when someone only asked for the time!

Be that as it may, 'commercial' models. My reading in my old time model mags tells me that this term describes a class of small (20- to 30-inch) models (of which the Pacific Ace is probably the classic example) which were intended to be realistic in appearance and resemble the full-scale commercial planes of the period (Curtiss Robins, Stinsons, Travelairs, etc.), which were just about all single-engine, cabin monoplanes. These models were intended for fun rather than for contest flying; a valid concept, as witness the fun we are still having with them.

As for motor sticks, if there is any advantage in using one, I haven't found it. The primary argument (for strength vs weight) won't wash. A decently designed fuselage will carry a given motor for considerably less structural weight than will a stick plus minimum framework. I just don't think that some of the old timers were aware of the tremendous strength of balsa under compression. The motor stick was just plain overkill. The other claimed advantage, protection against blow motors (on account of winding outside the fuselage), can easily be overcome by using a winder extension and blast tube. In short, if motor sticks were so great, we would still be using them.

Even so, I built the Commercial with a stick, just because it was part of the design of this particular model. Yes, the 'pointy' joint is plenty strong. Double-gluing with Ambroid works just fine. I think the stick would break in the middle first.

I don't really like the stick, though, for one main reason. It strictly limits the length of the motor. Any more than minimum slack is asking for trouble from the rubber wrapping around the stick and locking up. Since one of my standard trimming procedures is to vary motor length, this is a definite minus to me. However, for fun flying in a restricted space, this may not matter." 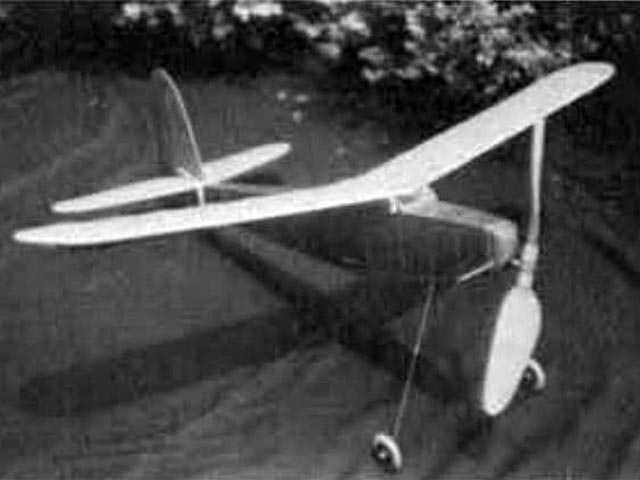