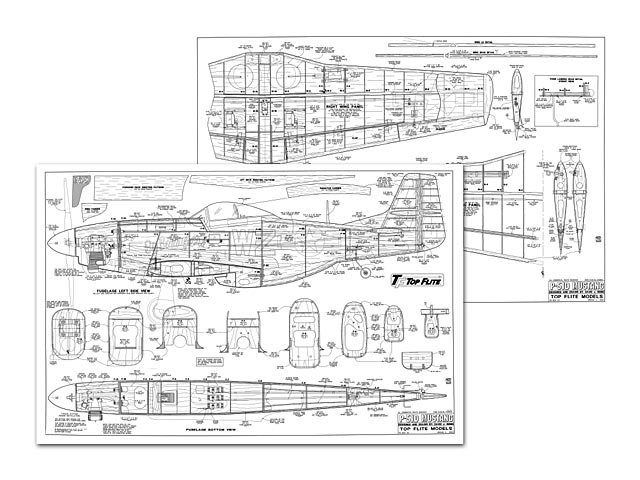 Quote: "Introduction: The Top Flite P-51D is an excellent sport scale model that is just as 'at home' with sport flying as it is in competition. Its exact scale outline allows you to add authentic details and take it into serious competition if desired. Its modern construction and refined aerodynamics, incorporating features such as computerdesigned airfoils that progressively change from root to tip with built-in washout, give you a plane that will build straighter and fly better than warbird kits of the past.

The Gold Edition Mustang is approximately 1/7th scale. The exact scale ratio is 1: 6.83. The trim scheme allows you to finish a very impressive model using Top Flite Super MonoKote®. The MonoKote covered prototype, shown on the box, was good enough to finish 2nd in Expert at the very competitive 1992 Blue Grass Scale Classic in Kentucky. It scored quite well in static due to its excellent outline, and posted the highest flight scores in the expert category. This performance earned the Mustang an invitation to the 1992 Scale Masters.

2. You must take time to build straight true and strong.

3. You must use a proper R/C radio that is in first class condition, the correct sized engine and correct components (fuel tank, wheels, etc.) throughout your building process.

4. You must properly install all R/C equipment and other components so that the model operates properly on the ground and in the air..."

Quote: "Hi, Steve and Mary; I found a copy of the Top Flite P-51D Gold Edition kit plans on Aerofred [see datafile]; which had been posted by sx700r. The plans as posted were two sheets that had been each cut in two through blank areas so no parts of the drawings were lost. I had a go at stitching the plans back together. I also found the kit manual on the Hobbico site. The plans lack most of the ribs, but there are a few, so an experienced modeller should be able to develop a set of ribs from the available information.
Top Flite appears to have gone out of the kit and ARF business, and they do not sell the plans. So here we can keep this beautiful model alive, perhaps.
The designer is David J. Ribbe. Wingspan is 65 in for .60 2-stroke up to 1.20 4-stroke engines. SIG makes a 15 in WWII canopy that would work on this model. Best Regards, MJB"

Topflite were well known for their range of sport scale WWII fighters which had been available since the early 1970's. The Corsair, Zero, P51 and Bearcat all had a wingspan of 60 in and were responsible for many modeller's first experience of scale building and flying. When Great Planes took over Topflite these models were replaced by the 'Gold Edition' range which feature accurate scale outlines, CNC cut parts and sharp laser printed plans.

A superb 58 page A4 instruction manual covers everything from metric conversion tables and a list of suggested tools right through the construction and finishing processes to tips on flying and safety considerations. Fixed or retractable undercarriage options are explained early on, and it makes a pleasant change to find that the builder is not left to guess the retracts installation. All the necessary info and parts are supplied for either version and the instructions cover the fitting of working flaps too.

Open it up: The box artwork is excellent and very eye catching. Inside there's loads of good quality balsa sheet and strip together with sheets of pre-cut fuselage formers and wing ribs. Smaller balsa and ply parts are bagged separately and a further bag has all the nuts, bolts and links necessary to complete the model. Canopy, ABS formed cowl, radiator intake, exhaust stacks and gun port mouldings are carefully wrapped in tissue to avoid transit damage and are also compartmented within the box to ensure that they arrive at your building board in perfect condition. There's nothing worse than having to glue parts back together before you can start a model and there was no chance of this happening with this kit.

I resisted the temptation to start gluing things together and pinned the plans temporarily on the model room wall. This allows the whole model to be studied at once and a thorough read through the instructions followed. Each step is accompanied by photos and a box is ticked when the step is completed. The construction sequence is clearly explained and anyone who has made a built up model before should have little trouble in building this model. Not only do the instructions tell you what to do, they tell you why you are doing it, which is very helpful if the builder doesn't understand a particular method or sequence of steps.

I had decided to fit retracts and chose some Rom-Air units which I had picked up at one of the shows some years back. I considered a retracting tail wheel also but felt that the weight, and therefore the wing loading, would be adversely affected if I added too many scale features to a model of this wingspan. For the same reason I decided against drop tanks, inner wheel well doors, sliding canopies and all the other things which are OK on larger models but not on a plane of this size. I wanted a model to enjoy on a regular basis which would be simple to operate and maintain. Not being competition minded, I had no constraints as to the scale fidelity, documentation, colour scheme, etc. This model was going to be a fun model and I could already imagine the low passes down the flying field against a backdrop of blue skies and puffy white clouds!

In a further effort to save weight I elected to change the suggested layout of a flap servo in each wing and replace it with one servo mounted in the centre section driving push rods to a 90 degree bellcrank in each wing - more of which later.

I decided to power the P51 with one of my trusty OS 70 Surpass engines which, although smaller than the specified power range, would be sufficient as I had used them before in similar sized models with good results.

The plans showed mylar or pinned type hinges for the control surfaces but I wished to use Robart 'hinge point' scale hinges which really add to the appearance and improve the efficiency of the surface considerably. The main difference to the construction when using these type of hinges is that you need to produce an overhang off the wing, tail or fin sheeting to form a shroud which covers the front of the moving control surface. The flaps however, were shown with this type of hinge, although the hinges weren't included in the kit, so no mod was needed here.

The last major change concerned the cockpit which I felt couldn't be left with a head and shoulder pilot inside that large canopy. My local model shop supplied me with one of the Pica range of vac-formed cockpit interiors which are light and easy to fit.

As the fuselage is built on a central lite-ply crutch which runs along the top of the fuselage side it would have to be cut away to make room for the cockpit mouldings and pilot figure. This could only be accomplished after the main assembly had been completed so I marked out the area to be removed. Also, one of the interlocking formers (F7) which carry the pre-cut servo tray is positioned in the intended cockpit area. This was cut away before assembly but retained the locating tabs to keep its shape. See photo. The servo tray had to be moved and was easily remedied as it can be reduced in length to fit in between formers F3 and F5, in other words, one bay forward. This is bound to benefit the balance point and as there was nothing in that bay anyway it seemed a better place to locate the bulk of the radio weight.

With these adjustments made on the plan, noted in the instruction book and sorted in my head, I got started with the construction..." 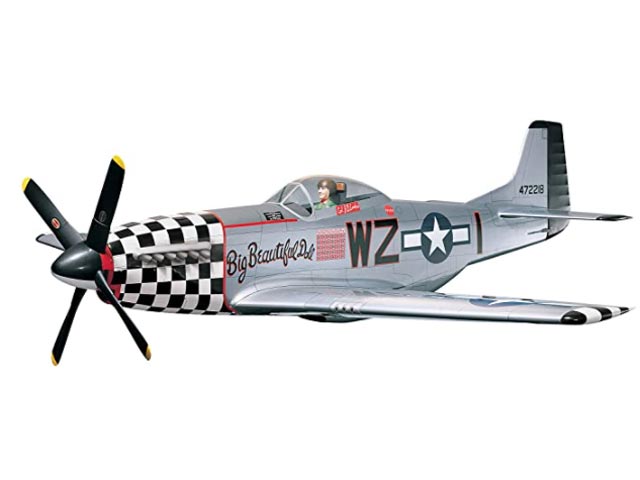 If anybody out there has the parts traced in a high resolution it would be highly appreciated, many thanks!
Julian - 08/02/2021
I remember drooling over these kits when I saw them advertised in RCM&E back in the mid 70's, they were way out of my price range as a kid. Thanks for sharing this plan.
John Green - 23/02/2021
Add a comment