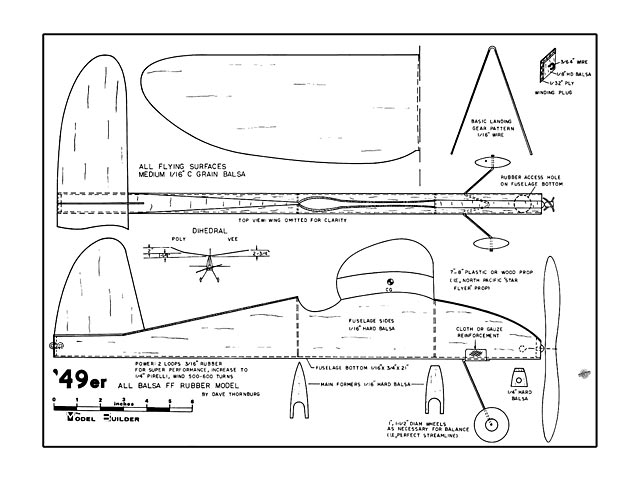 Quote: "The Forty Niner, by Dave Thornburg. A great little all-sheet-balsa sport free flight. A perfect trainer for that potential FAI team member. A quick and easy-built one-design for club competition - or just an evening's pleasure at the school playground.

Taking a shortcut through an empty ballpark this afternoon, I paused near second base and surveyed the open spaces around me. What a surprising amount of uncluttered air, and right in the middle of town! I ached for an old Jim Walker 'Hornet', or some similar rubber-powered stick model. No, a Hornet would climb right out of a field this size - what's needed is something with just a bit less performance. A rubber scale job? Those light poles look deadly. Say! What about the Forty-Niner?!

I rush home and dig through the Crash Club, a huge pasteboard box in the garage. Sure enough it's still whole! I gently extricate the old girl from a dozen other models, and put the eyeball to it. Time and the river have warped her up a bit, but warps have a way of counteracting each other in Forty-Niners. The 8 inch Paulowina wood prop is shattered, but I quickly pirate a 7 inch plastic one from a retired North Pacific 'Star Flyer'. Stuffing a winder into one pocket and a bottle of Sig rubber lube into another, I grab the Forty-Niner and head for the hobby shop. The dealer eyes my plane as I lope in the door. 'No returns on used merchandise', he quips. Ignoring his humor, I sprint out with six-and-one-half feet of 3/16 inch rubber, knotting it on the run. Slopping some lube into one palm, I work it into the rubber for two full blocks, arriving at the ballpark with a motor ready for installation.

A scrap of baling wire materializes beneath my lucky feet, and I use it to fish the double-looped motor down through the ancient, lube-soaked fuselage. With prop and tail plug in place, I try a gentle test glide. Hmmm - the warps have done her in: she wants to turn right. Left turns are safer under power for these high-pylon types. I breathe on the rudder trailing edge, bending it gently to the left. The next glide is better: shallow left turn. Since the prop has zero sidethrust, that should do it.

With the prop held delicately between the arches of my shoes and the plane standing giddily on its nose, I stretch the motor a foot or so and crank in 80 turns for a test hop. Launched into a slight kit bank, the Forty-Niner climbs out gently, with a fairly smooth transition from power to glide. It is dead calm, and the little plane makes one slow circle before dropping into a bouncy threepoint landing near home plate. I retrieve it, increase the winds to 150, toss it up again. A bit more left rudder should cure that slight tendency to hang on a prop near the end of the power run. This adjustment made, I crank in 500 turns and let her rip: up, up into the calm July afternoon, its propeller whirring fiercely - then the long glide, as gentle and silent as its shadow, into the warm outfield grass. She will take as much as 600-700 turns, and the park is hardly large enough to contain her on these full-power flights. Over and over I toss the Forty-Niner up into the quiet air, over and over it glides back to me on silent wings. Such pure pleasure a screaming engine can never deliver, and all for a single evening's building time.

You can have this enjoyment, too. Here's how. Begin with two pieces of hard C-grain balsa, 1/16 x 3 x 36. From one cut the two fuselage sides and the two large formers. From the second piece cut the fuselage bottom, a simple rectangle 3/4 x 21. Mark the former positions on this piece and glue the large formers in place, using a dope bottle or strategically placed pin to insure that they remain vertical until dry. Cut the nose former from 1/4 or 3/8 hard balsa, first drilling the hole for the thrust washer and then drawing the former around the hole (this keeps the wood from splitting out during the drilling operation). Glue this former in place with no down or side thrust. Downthrust is automatic due to the positive incidence in both wing and stab; if more is needed, the nose former is thick enough so that it can be added by sanding or cutting right out on the flying field.

When the formers are sufficiently dry, run a bead of cement down one edge of the fuselage bottom and maybe a 1/2 inch up each of the large lormers. Put one fuselage side flat on the workbench and lay the bottom carefully in place. Pin it into correct alignment..." 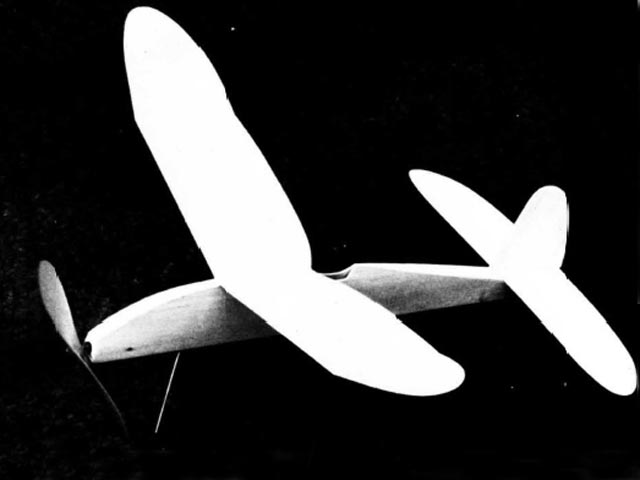 Thornburg's prose is as good as his designs and the amount of airmodelling science and common sense both explicit and implicit, so each article of his is a pleasure at several levels. This model may require an amount of pre-warped balsa, which should be easily obtained.
Miguel - 31/01/2021
Add a comment