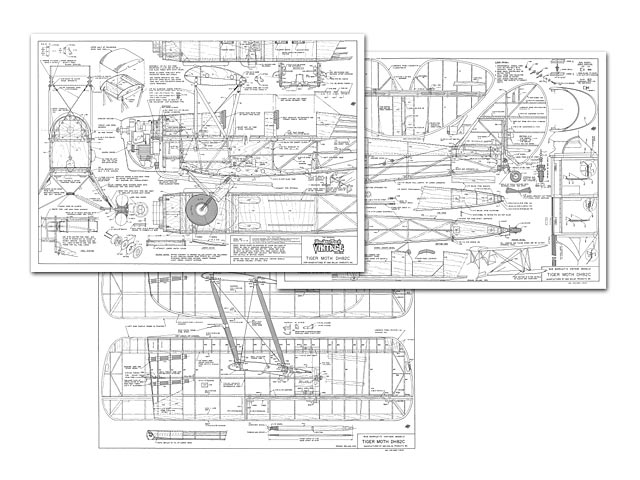 Quote: "Hi Outerzone. BernieB yesterday forwarded to you the three page plan sheets for the quarter scale Barkley Tiger Moth DH82C. As I have had the Barkley kit of the T.M. since the early 1980s and have since collected information on the model, as well as meeting a couple of times with John Clark, of Clark Industries - who produced the last version of the Barkley kit, I offered to submit the write up, along with a couple of related links. Here goes my contribution:

The DeHavilland 82C Tiger Moth - the 'C' is for the Canadian version - is a frequent entry in Canadian scale competitions and the Bud Barkley quarter scale kit, and its successors, by M&H Balsa and, finally by Clark Industries, is typically the basis for such entries.

The Bud Barkley kit was based on three views done by Lorne Williams in 1971-72 of a Tiger Moth DH82C at an Ottawa museum and the model won best of scale at the 1978 Toledo meet. Several years after Bud Barkley first produced the kit, his balsa suppliers and neighbours, M & H Balsa (Murray & Helen) took over production of the kit. Late in the 1980s John Clark Industries further refined and produced the kit, including a more detailed cowl, more material for the optional canopy, a Clark produced wood prop, etc. The Clark Industries box of the kit referenced the model as 'the original Bud Barkley Tiger Moth' and added 'Biggin Hill' to the Ontario address of the manufacturer in rural Tottenham. The Clark kit went out of production in the middle of the first decade of the 21st century. Throughout these iterations, the plans showed the Quadra 35 as the stock engine, although many have since used four stroke engine and electric motors.

Both Bud Barkley and John Clark have said that their quarter scale Tiger Moth flies best at an all up weight of 21-22 pounds, similar to weight quoted by the Flair quarter scale model but more than that spec'd by the Pilot version and even more than the Hobbico ARF. In any case, the simple wing loading and the cubic wing loading, even at 21-22 pounds comes in a subjective 'sport and some trainer' grouping as outlined by the Ampeer electric newsletter and a stall speed under 25mph.

The most prominent differences of the Canadian version of the Tiger Moth are the placement of the main landing gear, significantly forward of the leading edge of the lower wing, to mitigate nose overs because of the installation of brakes. This is shown in Barkley/M&H/Clark Industries plans, along with an outline of main gear location in the DH82A. The DH82C also had a tail wheel, instead of the British version's tail skid.The Canadian version also had an optional full canopy and heater take off from an extended muffler as the DH82C was used for primary training on the Prairies in winter during WWII."

Quote: "INTRODUCTION: Bud Barkley’s Vintage Models is pleased to present an exciting quarter scale model of the famous De Havilland Tiger Moth. This kit has been engineered to provide the builder with the maximum in building and flying enjoyment. The complete plans and assembly instructions together with high quality materials and accurately sawn parts ensure quick and easy assembly by modelers of any skill level. It is not recommended however, as a trainer.

The Tiger Moth is presented as a stand off scale replica of the RCAF serial 4861 Tiger now in the National Aeronantical Collection in Ottawa. Construction drawings were prepared by Graham Ireland from the detailed 3-views by Lorne Williams which are also provided as scale documentation. Although, the Canadian built DH82C version is primarily shown, the builder may elect to build the British DH82A model and the principal differences are showm on the drawings. Many additional details can be added from the Williams drawings or from other sources such as Profile Publications, etc.

Quadra powered quarter scale is a new and exciting phase of model building, and this DH82C Tiger Moth has been designed to take advantage of the Quadra engine’s easy starting, reliability, and smooth power output.

Quarter scale (3 in = 1 ft) was chosen after previous experience with a larger 3.6 inch scale Tiger. Reducing the size to 88 inches span provides a slightly better power margin and improved the performance in manoeuvers. In addition, plug-in wings were incorporated to permit transportation in smaller vehicles.

Construction throughout follows standard model methods with due consideration of the larger size and available power from the Quadra engine. If carefully constructed and finished according to the instructions and drawings provided, the model will provide many hours of enjoyable flying. Your comments and suggestions are most welcome. Good building, good flying and welcome to the Tiger Club!

1.1 Begin construction by assembling the fuselage side frames directly over the plans. Note that each side frame consists of two portions which are assembled separately and later joined. The foreward portion consists of the precut upper and lower longerons, verticals and plywood doubler. The rear frame shown on sheet two is of standard construction with spruce longerons and balsa uprights and diagonals. When completely set, the foreward and rear sections are joined with the correct angle as shown on the accompanying illustration. Ensure that the angles are equal on the left and right frames.

1.2 Assemble the two frames upside down over the fuselage bottom view shown on sheet one and sheet two. Add all the cross pieces shown and all diagonals and gussets. Do not bring the. frames together at the tail post until the frame is completely set. Check the frame for squareness and straightness and make any adjustments necessary.

1.4 Check the fit of the 5/8 in dia aluminum tubes for the lower wing spans. These should be adjusted in length if necessary and installed but NOT epoxied at this time.

1. 5 This is a good time to prepare the 16 oz gas tank as shown on sheet one. This is fabricated from a standard metal screw top fuel can with a clunk fuel feed installed in the removable cap. Add filler and vent lines and install in the fuselage with foam, screweyes and rubber bands as shown. Drill the front landing gear block for the tank drain pipe and connect to the tank overflow as shown.

1.6 Complete the bottom fuselage sheeting and removable hatch. Note that bottom scale details shown are not added at this time, but will be mounted after covering. Complete assembly of the tailpost and stabilizer mount. Check carefully that this assembly is square to the fuselage frame and not twisted.

1.7 Assemble the upper centre section dummy gas tank consisting of the 1/8 ply end formers T1 and ply spacers T1, T2. Fit the 6.25 inch long x 5/8 dia aluminum tubes for the upper wing plug-ins. Use narrow 3/8 inch masking tape to hold the tubes in place and provide a good bond for the expoxy. Ensure that this assembly is square and that the tubes are parallel as the epoxy sets. Trim as required to fit the lower tank half. Note polyester resin must be used to adhere to the tank..." 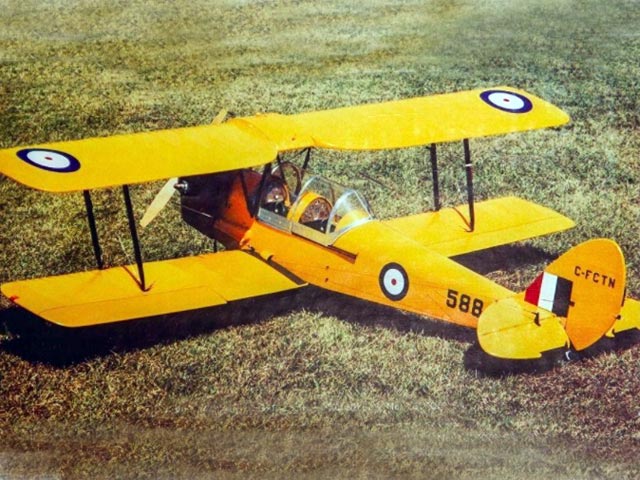 A Quadra engine was popular in 1975 BUT it is now 2021 and although I've searched the web, maybe not enough, I can not find an equivalent sized motor to power this model? I know there were at least two different sizes, but I'm not sure which one this model was powered with.
Could someone come up with an answer to the question, a modern motor, 2-cycle, 4- cycle or even an electric motor to power this model, please?
Thank you.
Bob Blubaugh - 01/02/2021
Hi Bob. For the Tiger Moth, assuming you will be flying in a scale manner, the convention for electric power is 50 to 75 Watts per pound. 75 to 100 Watts of you wanna do cool acrobatics and 100-220 Watts if you want to prop hang the Moth... In nitro based motors, 1 cubic inch gives approximately 2000 W. That's in the better 2-stroke motors. Work on 1500 W per cubic inch for a good 4-stroke. Gas engines... Ok, so nitro engines like full taps. Gas engines not so much. You are more likely to strap a bigger gas motor on. The idea is to run the motor at about 60% when at the desired speed. A very basic guide - Modern 35cc Gas motors will produce about 4 BHP at approx 9000 RPM - that's almost 3000W.
Roughly averaged, the Tigre is 22 lb and needs approximately 2200W. Other factors also need consideration. I live at 4577 feet above sea level. I find great amusement in some of the suggested engine sizes, you know, .60ci for a 2.5m plane. Also, the Tigre has more drag than a South African scrum 2 mins before the whistle 10 m from the line....
Bryan - 01/02/2021
Add a comment