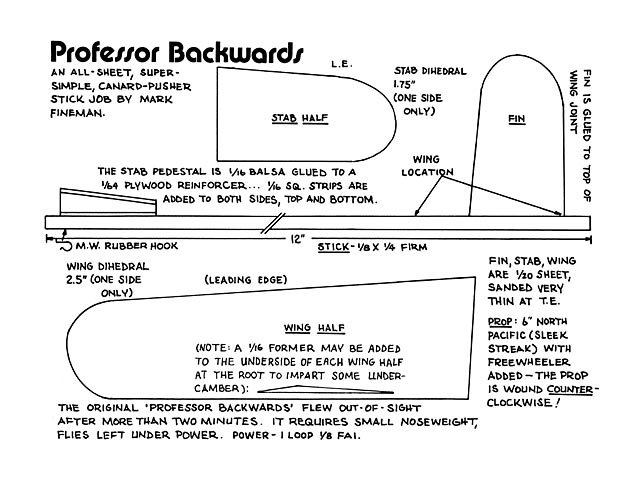 Many of the modelers who build rubber powered airplanes have yet to discover the simplicity, charm, and exhilarating performance of 'stick jobs,' small airplanes of spartan con-struction whose fuselage is a stick of balsa. I was introduced to stick jobs when I started flying regularly with the fellows of the Flying Aces Club here in Connecticut. In fact, we have an on-going contest among ourselves to see who can put up the best time with a stick job.

The rules are simplicity itself: The planes cannot exceed 20 inches in span, and the person with the highest time holds the stick trophy until bested by someone else. There are two qualifi-cations, however: If someone turns in a time in excess of five minutes he can only hold the trophy for 30 days, after which the contest begins anew; and the slate is wiped clean once a year on November 11 at 11:00 (Armistice Day)!

The stick trophy recently came into my possession when a plane of my own design clocked a time of 8 minutes and 37 seconds before flying out of sight. As luck would have it, the plane had been photographed just two days before and the plans carefully set down since two identical ships had been lost in earlier months. Professor Backwards, as the model has been dubbed, is a classic pusher-canard that can be built in little more than two evenings (including carving a prop). A six inch hand carved prop seemed to give somewhat better performance than a plastic North Pacific type and if properly carved will allow you to wind in the customary clockwise direction. Remember that when using a plastic propeller in the pusher con-figuration, the concave side faces the rear of the plane, just as with a tractor model, and that the prop must be wound in a counter-clockwise direc-tion. The ramp style freewheeler must be cut off and a substitute freewheeler constructed on the other side. This can be as simple as a split-ring washer epoxied to the rear of the prop hub.

It's easy to become frustrated with a stick job if you use a prefabricated prop hanger, like the ones found on toy store stick planes. An adjustable prop hanger that allows the flier to easily make thrust adjustments is much better and easy to make. The one sketched here was invented by Dave Stott and is so simple, one wonders why nobody had thought of it earlier. An angular U-shaped piece of .032 steel wire is soldered to a short length of brass tubing (1/16 od). Once the wire end has been wrapped with thread to the stick and given several coatings of the glue, thrust adjustments can be effected by holding the hanger at the bend of the 'U' with needle nosed pliers and twisting the tube (now con-taining the shaft and propeller assembly) in the desired direction. Thrust adjust-ments with a pusher are a bit different than for a tractor, except for down-thrust, so work slowly on such adjust-ments until you understand them.

Trimming Professor Backwards should be accomplished methodically, gradual-ly incorporating thrust and rudder adjustments until a good pattern is obtained. The model has flown equally well to the right or left under power and when properly trimmed should ascend in a fairly tight spiral, slightly nose high. Full turns should only be incorporated after the model flies reliably under low power." 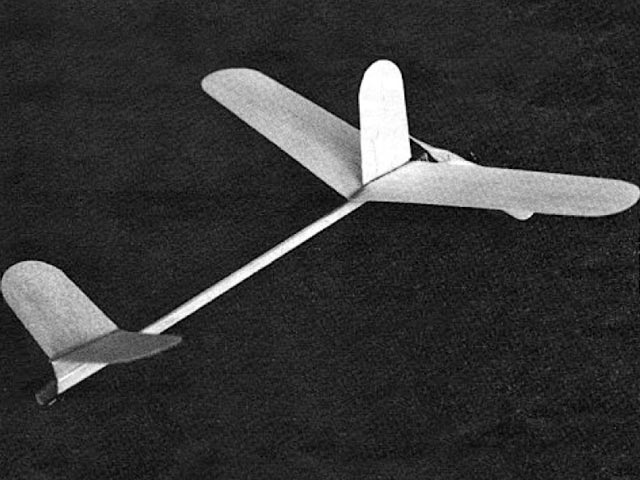