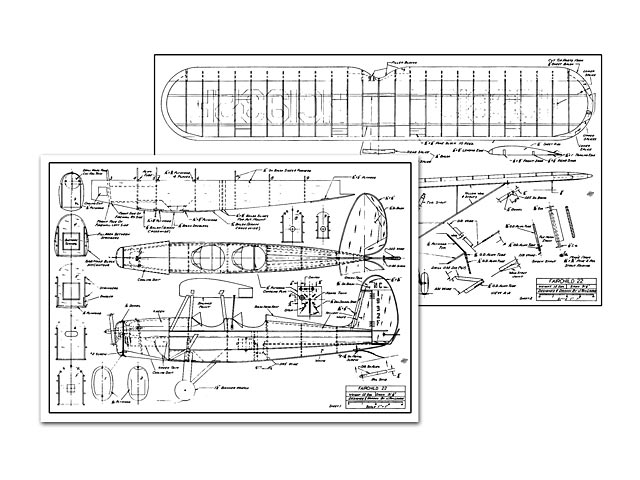 Quote: "An attractive old-timer, and a real cutie-pie in one inch scale, this Fairchild 22 may be flown as a free-flight or with single-channel radio.

The radio controlled scale model of the Fairchild 22 presented in this article is the fulfillment of a long standing dream of the author. I have been collecting magazines, books, etc since 1928 and have always thought about all the model projects I could work on when I retired some day. Well, the present plight of the defense industry has afforded me this opportunity much earlier than I had expected. Twenty nine years at Northrop Aircraft, including the wonderful years of the flying wing, is enough for a lifetime of that activity anyway.

I purchased an Ace Single Channel Commander radio control system about a year ago and have had a good time just flying for fun. Small models can be made much quicker and they 'bounce' real good compared to the five and six pounders.

I spent some time looking for all the pictures, three views, etc. on the Fairchild and during this process I came across the name of the owner of a restored 22. He is Major Don Coleman and he owns one of the oldest, if not the oldest restored 22 in existence. The airplane is presently in the EAA Museum. Major Coleman supplied photos and information and it is his airplane that the paint job and license number NC1932F are copied from. His airplane used Duco, but I selected model airplane dope in the interest of saving weight.

Typical model construction and methods were used in the design of the Fairchild, however some unique features are included. One is the method selected for installing the landing gear and wing struts. Aluminum tubing is mounted in the fuselage to receive piano wire fittings on the ends of the plywood struts. This feature facilitates painting of the model and I believe it also adds to its ability to absorb punishment. Easy wing removal also aids installation and access to the radio and helps when a repair job happens! The model features a landing gear shock absorbing system wherein the struts move much like the big Fairchild.

Another feature is the compatibility of the model and the Ace constant chord foam wing. I have made a foam wing for it but have no yet made a test flight. The foam wing with wood inserts for attaching the wing mounting screws, balsa trailing edge and covered with transparent Top Cote weighs approximately two ounces more than the built-up tissue covered wing shown on the plans. If you are a foam advocate go ahead I believe it will work OK.

Contest balsa is used throughout, except for the few places noted in the text, fur weight saving or case in fabrication. Ambroid and five-minute epoxy (Devcon or Hobby Poxy) were used for all glue joints. I am a strong believer in using several coats of glue so this point is made over and over throughout the construction article. Full size plans are available and if you are like me, you will probably buy them even if you don't build the model.

The wing is of conventional construction. I cut all the ribs to the configuration shown on the plans, although some modification is required on the center rib to allow for the spar splices and trailing edge cutout. Also, the outermost rib on each tip requires some modification during tip shaping, but since I hate cutting ribs anyway I made them all at the same time and made changes later as noted above. A total of twentyfive ribs is required. Rough cut oversize blanks and pin them together with straight pins pushed in Irom both sides. Using a plywood template, you can then saw the ribs to shape on a jigsaw. A small amount of sanding finishes the job.

Since I have been building several models of this general size I went to a little extra effort in preparing a wing jig. I purchased some half inch thick clear soft white pine from the local lumber yard. It's expensive, but worth it. It is normally used by cabinet makers for the sides for drawers and takes pins nicely. I cut two pieces about seven inches wide by twenty-four inches long and joined them with strapping tape at the center, for varying dihedral angles. Lay these on your bench and block up ends to proper dihedral. Now you can assemble the complete wing without moving it and thus help to prevent warps.

Either cut the wing outline from the plan or trace the necessary information on vellum and place on the wing jig. Cover with wax paper or saran wrap. Next pin the spars and the lower trailing edge piece in position on the plans.

Be sure and select very hard 1/32 inch sheet balsa for the trailing edge. You can now glue all the ribs in place. Next, glue the 1/16 thick splices at the center spar joints. Relieve the center rib for these splices before attaching it. I omitted the trailing edge cutout at this time. Add soft balsa filler blocks at the trailing edge between the first two ribs on each side. After the glue is dry, sand the fillers to the contour of the upper rib surface. I partially shaped the leading edges and the tip contour before glueing them in place.

The tips are cut in the usual manner from 1/8 inch sheet balsa. Two layers are required, as shown on the plans. The layers are made in three pieces each with the grain in the direction shosirn for added strength and warp resistance. Set the tip on top of the lower trailing edge and block it up to meet the leading edge. Shape the wing tip at the trailing edge as required to install the upper trailing edge piece at this time, leaving the remainder of the tip shaping until the wing is complete. 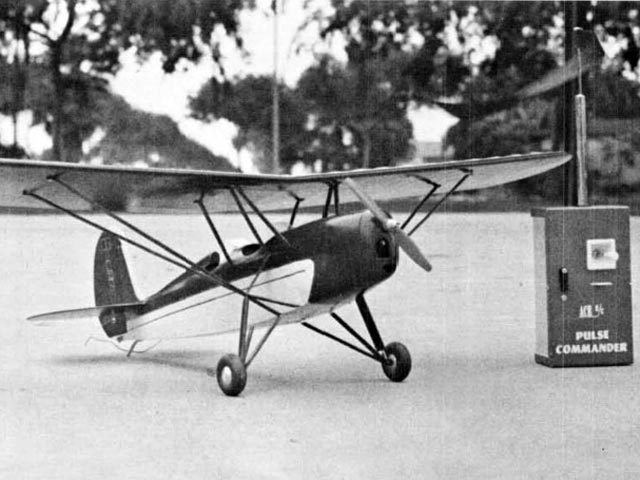