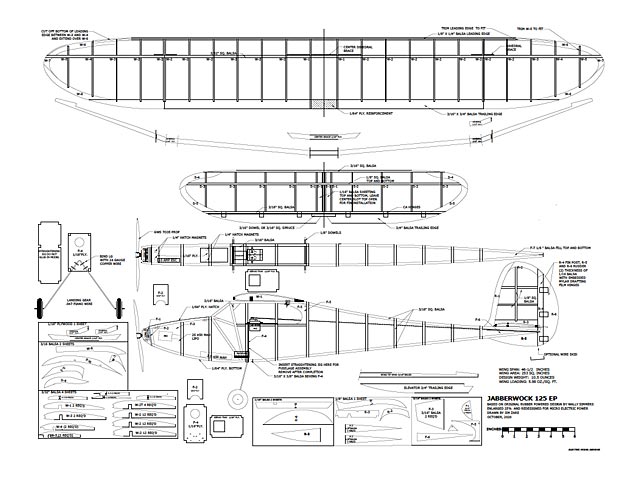 The original Wally Simmers designed Jabberwock (oz2978) was a Midwest kit circa 1939. This here is a later version for RC and electric.

Quote: "I have had a blast this summer flying 125% enlarged Midwest / Wally Simmers rubber models converted to electric powered and RC. I started with a Dyna Moe (oz12666) and followed up with the Gollywock (oz12665). These vintage designs trace back to the period after World War 2. This was quite nostalgic for me since I built some of these models in my teens.

With the Covid restrictions I have spent many hours in the basement building or drawing model airplanes….. more so this year than any time I can remember. I just had to complete the trifecta and create a plan for the Jabberwock. I have been using AutoCAD for over 30 years so this comes easy to me. I have attached the plan that was created.

I used the wing and stab plan form from the Dyna Moe and traced the Jabberwock fuselage. The top sheeting was eliminated on the wing. I also used the same flat bottom airfoil mentioned earlier in this thread.

The length of the Jabberwock fuselage is slightly smaller than both the Dyna Moe and Gollywock. The biggest difference is the inclusion of landing gear.

Construction was straight forward and was actually built in less than a week. The model is covered with Ultracote Fluorescent Transparent Yellow.

My 6-year-old grandson, Graham actually glued some of the wing ribs in place during construction. He wanted to be there for the first flights. I tried a test glide to check balance and then tossed it into air for the first flight. It flew superbly! The next flights were ROG and Graham got some stick time. I haven’t had a chance to see how well is reacts to thermals but I expect it will be identical to the Dyna Moe and Gollywock.

These are delightful models. I hope some of you will try these in the future and keep the spirit of 1940’s modelling alive."

Quote: "I want to submit my plan for the Jabberwock 125% RC. It was shown in RC Groups on October 15, 2020 [see: https://www.rcgroups.com/forums/showthread.php?3685581-Dynamoe-Gollywock-and-Jabberwock-125-Electric-RC/page2]. You can find several photos there."

Update 31/01/2021: Replaced this plan with a corrected copy (dimensioning), thanks to JimZare. 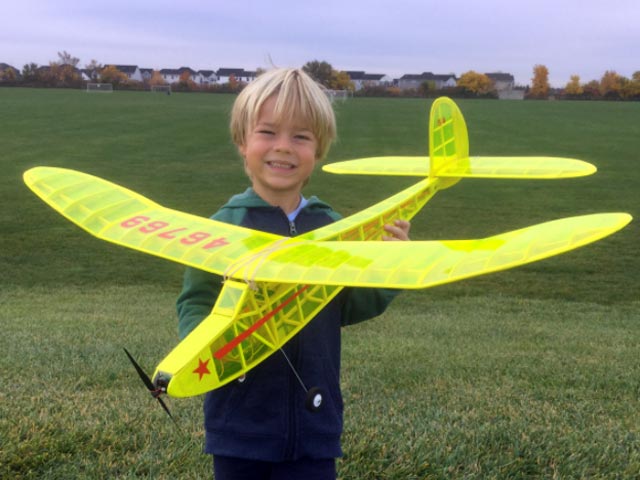