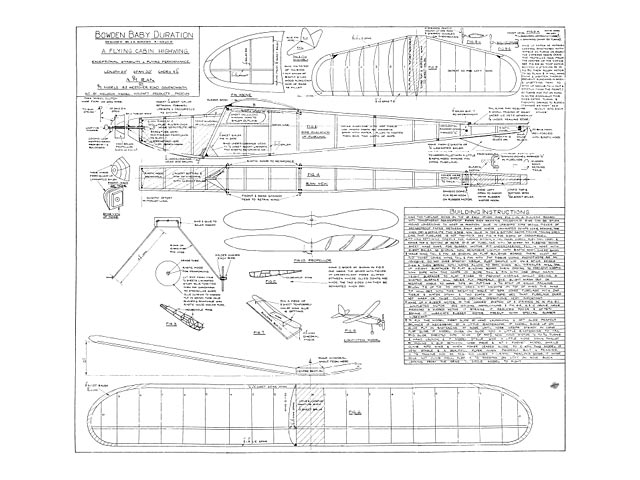 "Bowden Baby Duration. Col Bowden, being primarily a power man, installed rather over-generous sheeting at the front of the fuselage (which would make it ideal for tiny diesel or electric power). When building mine I was more economical in this regard and therefore the wing ended up slightly further back than shown on the plan.

Out on the meadow in far too much wind for trimming, I tried some test glides by launching whilst walking backwards. It seemed OK so 350 turns went on and it turned right for half a circuit before the wing stalled followed by the prop stalling and an ungainly descent. As it was already turning right it seemed to need downthrust so a bit of 1/8 went in on the top of the noseblock. This might seem a lot but the hole at the front is cave-like in comparison to most similar planes. Next flight, it seemed well under control bucking around in the turbulence turning right on both power and glide but with a slight stall on the latter. Time to put it back in the box thankful that there was no damage and the trim didn’t look far off.

Next time out, it was absolutely beautiful and only needed the addition of a .5mm shim of extra right thrust to obtain some great flights. On the last one, it got as high as any flight I have ever had at Port Meadow and I expected a difficult retrieve but the 45-degree pop up wing DT brought it down ultra-efficiently within the boundary hedge.

Bowden’s Baby is a great job and an easy build." 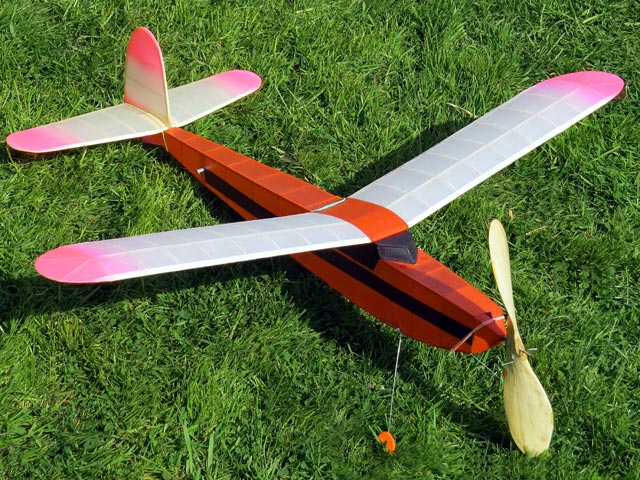