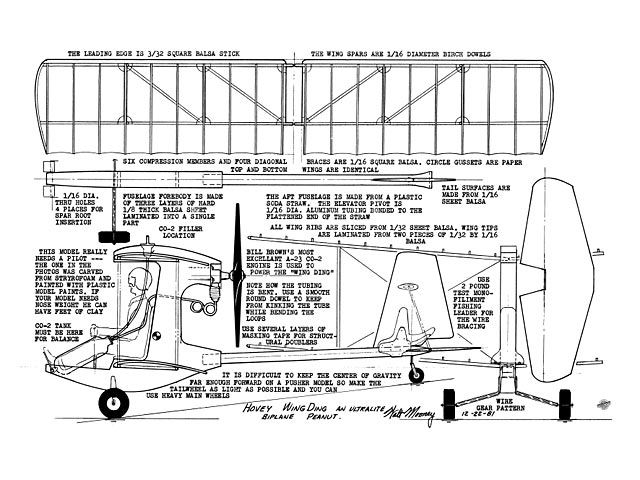 Quote: "Every now and then Perfesser Peanut does something outside the realm of rubber powered Peanuts. This time it's a CO2 powered, scale ultralight named Wing Ding.

The Wing Ding was conceived by RW Hovey as a simple, easily built, and easily dismantled (for ground transporting), ultralight homebuilt airplane. The little design makes an intriguing peanut scale model. As a basic design, it has some drawbacks as a peanut. First, the motor base and allowable propeller diameter are too small for a rubber powered model. Second, it is a pusher configuration, and might be hard to balance. Bill Brown's CO2 engine, the A-23, makes the Wing Ding a real possibility. It will swing the right diameter propeller, and the tank system can be installed so that there is a good chance of balancing the model.

The full-size airplane has a built-up, plywood-covered, forward fuselage body with an aluminum tube tailboom. The tail surfaces on the prototype were foam core with cardboard covering, although this has been replaced since the early flights with a built-up fabric-covered empennage. It has wire braced, fabric-covered biplane wings and conventional, tail dragger type landing gear.

The model was built to resemble the early prototype version, so it uses sheet balsa tail surfaces. Before the model was covered, there were doubts that the tail was large enough and light enough to allow good flying characteristics. A larger, built-up set, of flying tail surfaces was constructed. However, the model was test flown with the scale-size balsa sheet surfaces, and it flies very well.

The high thrust line of the engine tends to hold the nose down under power, so the powered portion of the flight is relatively fast, while the glide tends to be considerably slower. The center of gravity location shown on the plan is where the model in the photos balances. Probably, this is about as far aft a CG as is allowable. A CG slightly forward of the position shown might be a little better. Even so, with the CG as shown, the model needed a 1/32nd shim under the top motor mounting lug to give a few degrees of up-thrust. Without this up-thrust, the climb was very shallow.

The model is also sensitive to rudder adjustments, as might be expected with the vertical tail directly in the slip-stream. If the turn is tight, the model will tend to spiral dive, however, wide turning circles have proven to be quite safe. Some side area forward of the CG will tend to reduce the spiral diving tendency, so don't forget to have a pilot. A fat pilot might be even better, both from the standpoint of forward side area, and the forward center of gravity location.. " 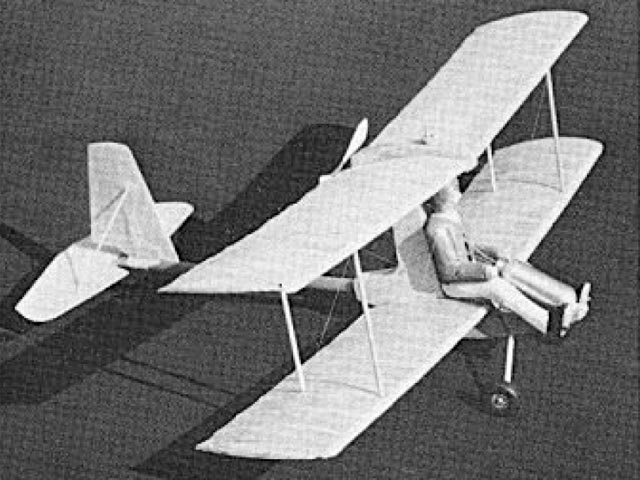