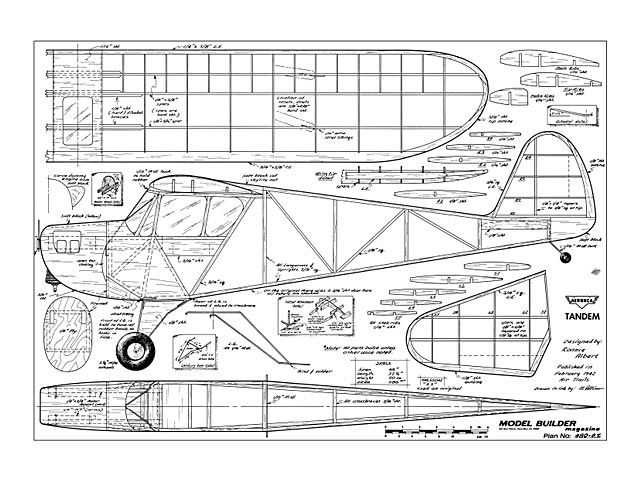 The Ronnie Albert Aeronca Tandem (oz1657) plan was first published in Air Trails February 1942. This here is a later redrawn plan from MB in April 1980.

Scale models rarely find their way into RCMB as the featured Old Timer, so this month we're presenting plans for a 48-inch Aeronca Tandem that appeared in the February 1942 issue of Air Trails. The model was designed by Ronnie Albert and was touted as being of contest caliber, although we doubt that anyone would want to pit one of these against a Ranger or Playboy or similar type model. (The climb must have been pretty rapid, though, as the original used an Ohlsson .23.) Instead, we thought the Aeronca would appeal to those looking for a good, realistic flying scale model that is also a genuine Old Timer.

We tried to find some details on the model's full-size counterpart, but didn't have much luck. All we know is that the real Aeronca Tandem (also called the Tandem Trainer) was built in 1940. Very few were made; the Aeronca factory concentrated instead on building L-3's and O-58 Defenders for the military. At least one full-size Tandem is active, having been restored in 1977.

The model Tandem utilizes very simple construction and would make a fine F/F sport model with a good .049 glow or .09 ignition engine. It would also be a fun little R/C job with three channels and an .09 or .10 in the nose. For control surfaces, try putting the elevator hinge line at the rear stab spar and the rudder hinge line at the front of the tail block on the fuselage; this way the rudder can be continued to the bottom of the fuselage.

The original article included a separ-ate sheet of drawings that showed how to adapt the model to control line. Basically it was similar to modern C/L linkage systems, but with a bellcrank rigged with rubber bands to return it to neutral in case the lines went slack and control was lost, hopefully keeping the model on an even keel until the panicking flier could sprint backwards and regain line tension. Just how much of a pullout he could make is questionable, as the recommended elevator throw was only 3/16 inch up and 1/8 inch down!" 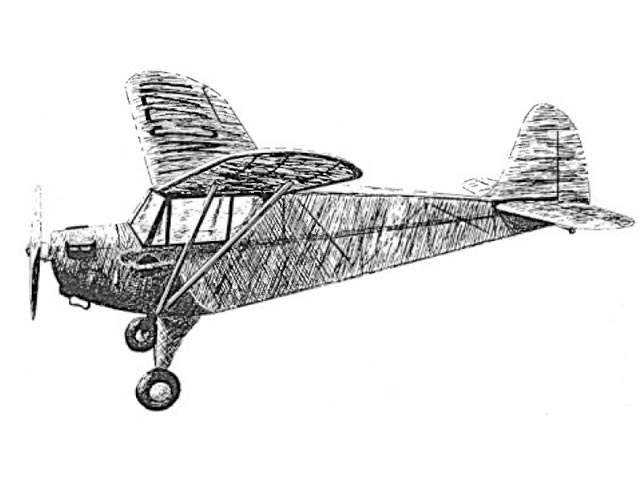 Aeronca made the T model, called the Tandem Trainer as the first of several models, such as the TA Defender and the O-58 model. There were several engine options for the plane. A model on this design can be easily modified to represent the other models. There were almost 1000 planes produced on this platform during World War II.
Mark Peterson - 26/01/2021
Add a comment