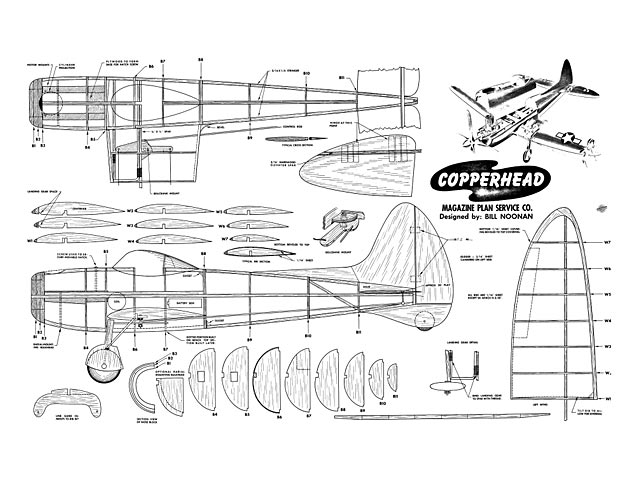 Quote: "For sheer realism, this composite fighter van't be beat. For speed and good looks, it is one of the bst control-liners. Copperhead, by Bill Noonan.

NEXT to the actual building and flying of models. I believe any modeler gets most enjoyment out of simply getting together witth the guys and having a real bull session, discussing the pros and cons of various types, wing loading, construction, etc.

Although the next door neighbours may complain about one of your pals showing how his new 'Colussus Super 60' gives out early on a Sunday morning, or the the lady across the street may shake her head doubtfully when you demonstrate to a friend how your ten-minute-without-a-thermal job acted, the modeler undoubtedly gains new knowledge of a subject or idea he was ignorant of by participating in these shindigs. One of these discussions involving construction, proportion of a model, power, etc, greatly influenced the design of the Copperhead.

First, size in relation to Power was the topic. Although preference varied as to the ideal 'universal' size, a 32-inch span was considered a good all-round dimension, allowing engines of practically any displacement to be used. The design was conceived primarily with realism in mind, speed not being a factor.

For realism, it embodies the characteristics of a great many of todays fighting planes: in it may be seen the influence of the Republic P-47, or perhaps the Jap Zeke or Tojo. The model was designed with no specific airplane in mind; I just wanted a model that would resemble a modern fighter. In spite of a fairly high power-to-weight ratio, the average speed was better than anticipated. The original model was powered with an engine of .23 cu inch displacement; motors of greater displacement should substantially increase the speed and maneuverability.

Backbone construction (laying a 'keel' directly over plans then cementing bulkhead halves in place) was accepted as the most practical and accurate. The old method of first building a box frame, then gluing formers on top, bottom, and sides, was decided to be a little on the heavy side as well as taking more time to build.

It is true that in designing a model (or full-size airplane, for that matter) one thing has to be sacrificed for another: super finishes mean added weight, droppable gear means more abuse on the model, etc. In the case of the Copperhead, the external installation of the bellcrank somewhat spoiled the appearance, but ease of adjustment and maintenance make up for this. Mounting controls outside fuselage are used so alterations can be made on the bell crank-to-elevator linkage to insure smooth and efficient operation.

Accessibility of ignition was another thing that was not overlooked. The hatch was made removable far enough aft so that there was enough room in the uncovered portion of the fuselage to allow shifting of batteries and coil, to obtain correct balance.

All points taken into consideration, the design of the Copperhead is realistic and practical.

Construction: Probably the most unorthodox feature of the model is the blister canopy. This was made possible by the use of a liquid, similar to thinner, which makes celluloid soft and pliable. After soaking a sheet of celluloid of the proper dimensions in this solvent, it can easily be molded into practically any form.

The blister is easily molded with use of previously mentioned solvent, or the celluloid may be heated and stretched over a hardwood (pine) mold. in the case of the original, a trailing antenna lead weight was used as a mold, but very few people have access to such an object, so a pine or hard balsa block shaped from tracing side and top views oti plans makes the form. Trim away excess cellulloid from completed molding and fit to fuselage in correct place over cockpit. which has been cut to coincide with canopy. Wait until model is finished to glue blister in place, even though it may be a temptation to do so as soon as mold has stiffened.

After accurately enlarging plans, place waxed paper over them, using thumb tacks to secure corners. Now, procure a piece of plywood (Mom's breadboard would be swell) or any other piece of smooth wood and start cutting bulkheads (formers) E, F, G, H, I, J, K, and L from a good grade of medium 3/32 sheet balsa. After these have been cut and notched, set them aside and cut bulkheads A, B, and C (nose) from 1/4 in medium-hard balsa. Cut or saw tirewall bulkhead I) from 1/16 plywood. If radial mounting of Ohlsson 23 is preferred to beam mounts, use same procedure when cutting plywood as in forming firewall..." 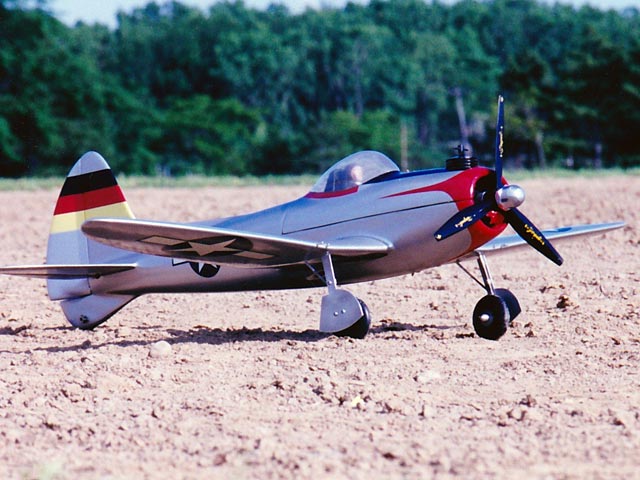 Hi Mary, I hope you and Steve are well. You've done it again. You posted one of those "Gotta build plans". I purchased an Air Trails Model Plans Service packet from Polks Hobbies at the Westchester Radio Aero Modelers (WRAM) show in the early 1990s that included plans for "Could Be" by Ted Lanham, Bobcat by GW Worthington, one plan that I don't recall, and Bill Noonan's Copperhead. The lines of the Copperhead were so appealing that I had to build it. I built it in 1996. The attached photos are the results of my effort [main pic, 005-009].
It was powered by a Russian MAP3 2.5cc diesel. The bellcrank and elevator push-rod were integrated within the fuselage. The finish was Pactra Formula U over 0.56 oz glass and epoxy. The photos with the yellow trim were taken prior to the first flight. The more colorful photos were taken after the repairs that were required after the first flight was attempted. It did fly some successful flights after the repairs until flew it in some windy conditions - I think I still have all of the pieces....
Now that you have added this beautiful plane plan to your site, a 2x enlarged version might be taken on in the future. Please feel free to add the photos to the site if you desire. Thank you for this wonderful website and take care.
from Buffalo, NY
Doug Weaver - 01/02/2021
Add a comment