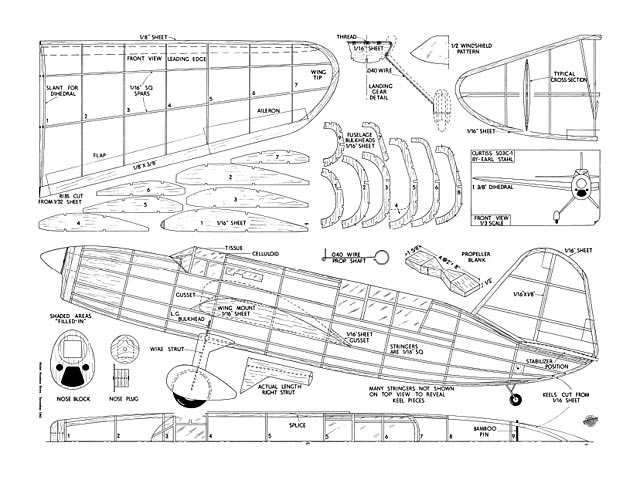 Quote: "Newest scout-observation plane being produced for the US Navy is the trim little Curtiss SO3C-1. As such, it is designed to perform the various duties required of planes operating from cruisers and battleships. It can be used either as a landplane or seaplane, its chief function, however being that of catapult launched seaplane.

Frequently referred to as the 'eyes of the fleet' it is the military mission of these ships to direct the fire of the battleships' big guns and conduct long range scouting activities in search of enemy surface vessels and submarines. In addition to these tasks the 'S-O' planes lay protective smoke screens around friendly naval craft and fighting activities.

In design the SO3C-1 is a two-seater, mid-wing monoplane. An inverted, air-cooled Ranger 12 cylinder engine of 520 horsepower is installed. With the exception of the fabric covered tail surfaces, construction is all metal. As a landplane, the ship is equipped with a fully faired, non retractable landing gear; when being used as a catapult launched seaplane, a large single main float and two small wing tip floats are installed.

Compared with modern share or aircraft carrier based aircraft, the performance is not starting; nevertheless it is considerably improved over that of the old Vought 'Corsairs' and Curtiss 'Seagulls' (SOC-1) formerly assigned to this task. Top speed is in the neighborhood of 200 m.p.h. while cruising speed is 146 m.p.h. Specially designed slots and flaps keep the landing speed at less then 60 m.p.h. The fuel load of 199 gallons should give a cruising range of more than 1.000 miles.

The Curtiss SO3C-1 is not heavily armed. An electrically controlled machine gun is located in each wing half just outboard of the propeller arc. The observer is provided with a single gun which is exposed when the panels to the rear of his cockpit are lowered. Racks for small bombs may be installed under the wings and when flown as a landplane, a small torpedo may be carried beneath the belly.

Because of its ideal proportions and relatively simple structure, the SO3C-1 is readily adaptable for a flying scale model. Our little ship is a faithful reproduction of the prototype and for that reason makes an interesting model to build and fly. If carefully built from the accompanying plans, this little naval scout will take to the air as readily as 'a duck takes to water'.

Construction of the model is not difficult; before work is started, the pages of the plans should be properly joined. Select all balsa wood carefully so the structure will be as strong and light as possible. Cement all joints firmly checking frequently for correct alignment.

Fuselage: The keel and bulkhead method of construction is employed for the fuselage. Exact size bulkheads are shown on the plan; two of each are required (except No.5 of which four are needed). They are cut from medium grade 1/16 sheet. Cut only those notches indicated; others will be cut later as required. Four keels are necessary; the top, bottom and the two side ones. The side keels are clearly shown and the shape of others is obtained by tracing the top and bottom outlines of the side view - average depth is about 5/64 and they too are cut from medium 1/16 sheet.

To begin assembly pin the top and bottom keels to position over the side view. Next cement half the bulkheads to place in a vertical position. Add the side keel and check for correct alignment. When dry, remove from the plan and add the remaining bulkheads and side keel to their respective positions. Check and recheck the structure to be certain that it is true.

Stringers are rather hard grade 1/16 square stock. Attach those nearest the side keels first; add a stringer to each side at the same time to avoid pulling the structure out of line. Where there are no notches for the stringers, they are easily cut using a razor blade that has been broken to a sharp sliver.

Filling-in the nose adds to the strength and attractiveness. The area shown lightly shaded on the plan is to be fitted with individual pieces of soft 1/16 or 3/32 balsa neatly cut to fit snugly between the stringers and bulkheads. Cement two pieces of 1/4 sheet together for the nose block; cut to outline shape and remove the square section into which the nose plug fits. Roughly cut to shape and then cement the nose block to bulkhead No. 1. Cut and sand the entire nose to a smooth, accurate shape.

As shown, 1/16 sheet gussets are cemented to the fuselage to reinforce the wing mount. Cut two rib shaped wing mounts from hard 1/16 sheet and cement them to place with their base exactly parallel to the stringer; cement very firmly. The 3/32 thick blocks in the rear which hold the bamboo pin can be added also..." 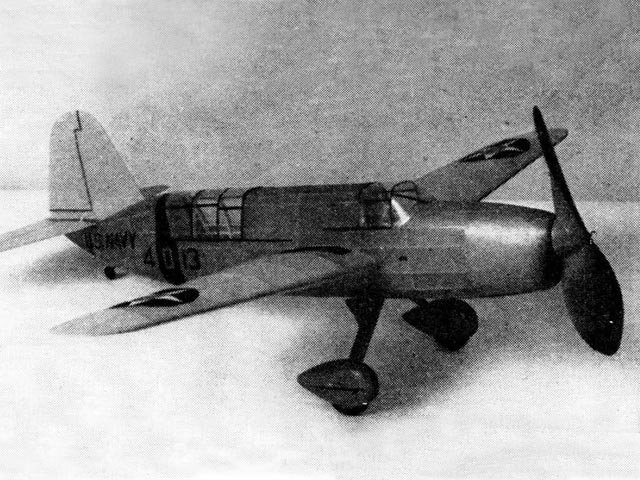 I suppose I should have a go at the Curtiss. After all, it was published the month I was born which makes us both 79!
Alan - 29/01/2021
I was taught never to ask a plan its age, now you've spilled the beans! :-) Nice criterium to choose a plan, my own vintage is well peopled too.
Cheers, Alan, may you build many more and may they all fly straight and true!
Miguel - 29/01/2021
Add a comment