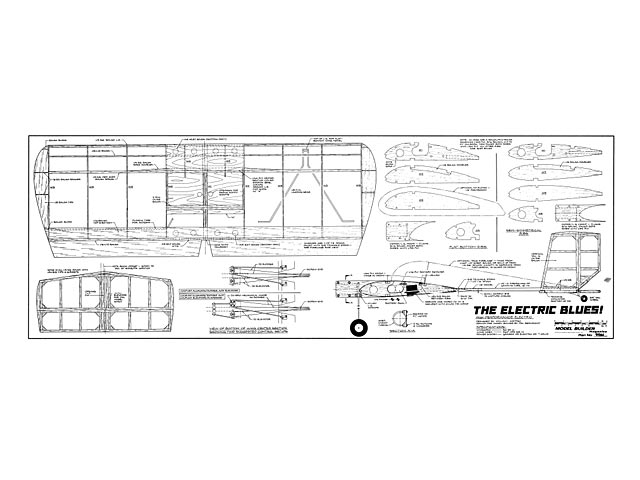 Quote: "Electric Blues, by William Whitten. Combine a hot geared 05 electric system with this lightweight aerobatic airframe and get ready for a wild ride! Features simple, conventional construction throughout, with your choice of airfoils and wingtip treatment.

Got the 'electric blahs'? Or are you maybe just tired of that tame sportplane or glider? How would you like to try an electric but want something with some real zip, something that's easy to build and won't cost an arm and a leg?

If the answer is yes then maybe you need the Electric Blues! It's highly aerobatic on low-cost motors and the wing hatch makes changing batteries fast and easy. Some may find the Blues' short wings, profile fuselage and motor hanging out in the breeze a bit homely, but I prefer to think of it as having 'character.' The stubby wing packs a lot of area and also allows the use of standard 36-inch balsa without splices. The Blues' main drawback is that it may ruin you for most other electric planes!

The Electric Blues is patterned after the 'fun-fly' planes seen in recent years. Two versions are shown on the plan, the major differences being the airfoil and wingtips. I prefer the semi-symmetrical version with rounded tips. This airfoil was lifted from Bill Northrop's Apprentice (oz10199) from many years ago. The flat-bottom plane with tip plates also flies well, though a bit slower. All-up weight with a seven-cell 1400-mAH battery pack is 42-44 ounces.

Power System: There are any number of 05 motors that will fly the Blues, but the best combination I've found is a Trinity 'Sapphire' 17-turn car motor retimed to operate in the right direction and fitted with a 3.5:1 gearbox. Astro's geared cobalt 05 also does well and the 'War' series motors from Model Electronics should do likewise, though I haven't tried one.

In any case, I suggest you use only the new Master Airscrew 'electric' wood props. I use an 11 x7 with eight 1000-mAH cells and a 12x8 with seven 1400-mAH cells. I get close to four minutes at full power, with the eight-cell pack having a slight edge in performance. The 12x8 on eight cells gives extreme power but 1 doubt the Sapphire motor will take it too long. With the motor out in the breeze, it stays cool but be sure enough air flows through the wing to keep the batteries and speed control from overheating.

Control System: The controls are unusual in that I get up to four 'functions' from just two servos. The rudder is driven via pull-pull cables from the aileron servo. The elevator is also driven via pull-pull cables. If you want to try coupled elevator and flaperons, a Du-Bro mechanical mixer on the aileron servo can be driven by the elevator servo via a turnaround bellcrank forward of both servos. Flaperons will tighten up loops and make takeoffs shorter, but I'm not sure they're worth it. The plane won't spin with 'em, and when you make the ball joints free enough for mini servos to operate, the whole system gets a bit sloppy. You can always try the mixer and take it off if you don't like it.

Construction: Pick your balsa carefully. Look for stiff but light balsa except for the wing spars; use some good straight medium-hard stock for them since there are no shear webs. Try to keep weight down wherever you can. I use thin CA for almost all of the construction, plus a little epoxy when joining the tail feathers to the boom and the motor mount to the wing.

Empennage: Get these out of the way first. Make sure all the joints are tight and don't forget the corner gussets. The slot in the stab for the vertical fin needs to be a nice tight fit on the fin. The tailboom will be epoxied into the fin/stab junction later. 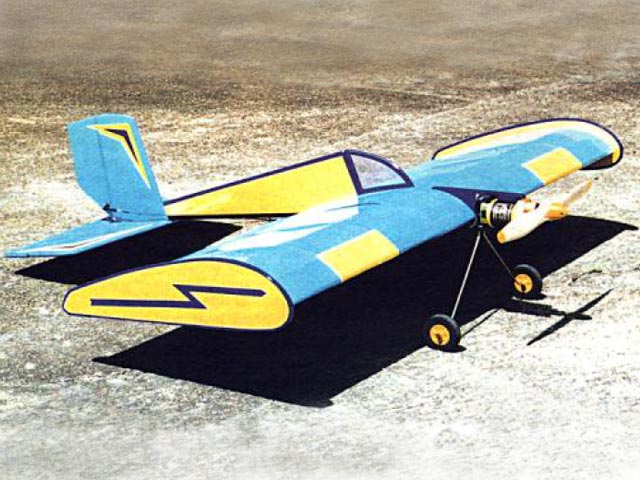 Irl Whitten was a friend of mine. Yes I know it says William but we knew him as Irl. Electric Blues was his last project before he passed away from his many medical problems. I flew it from the Bama Flyers field, amazing performance. I still don't understand how he got rudder, elevator, ailerons and flaps from just two servos, but it worked somehow using dacron fishing line. Back then, cheap brushed motors and heavy Nicads were all there was, it would be unbelievable with modern equipment. The original model hangs in the Southern Museum of Flight in Birmingham. Don't know what happened to the second flat bottom model. The one I flew had a symmetrical airfoil, that's the one I would build. You won't be disappointed.
doug smith - 22/01/2021
Add a comment