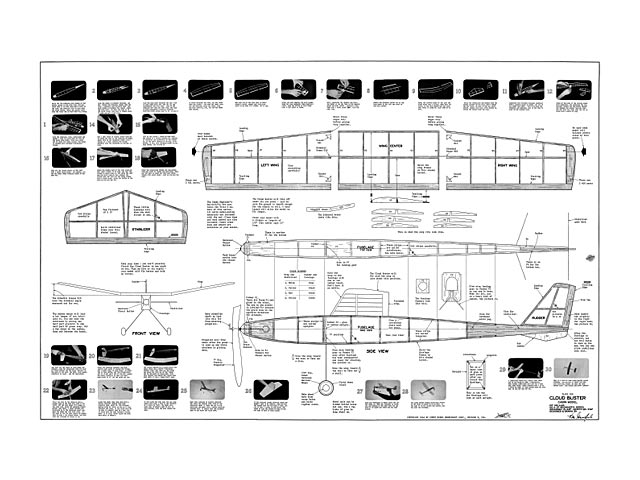 Note found online in jpg format (see datafile) this here is a PDF scaled up to full size at wingspan 21-3/16 inches, as a 400 dpi 2-colour bitmap.

Update 2/2/2022: Replaced this plan with a clearer version, thanks to Tom Solinksi.

Quote: "Happy February Steve and Mary. One more from the late Larry Kruse collection. Two complete and new Comet Cloud Busters [pic 004]. Per the request on the referenced plan page, here is a scan of the 'Stock' Comet plan with assembly instructions. From Oklahoma City," 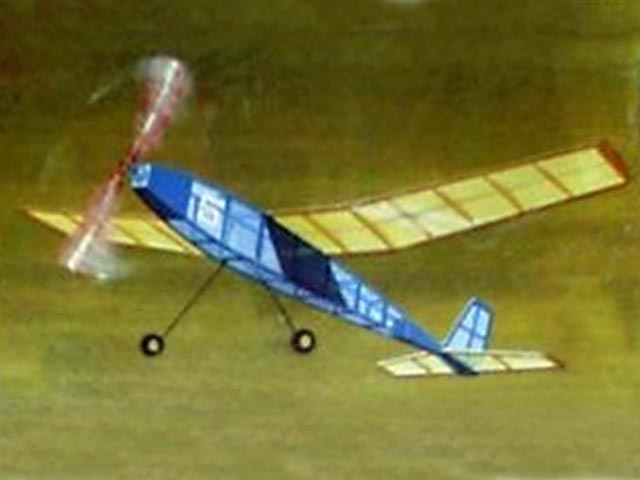 I've read someplace that Guillow acquired this design and renamed it the Fly Boy. They still list the kit, though it's out of stock at the moment. They have a different design they call the Cloud Buster.
Lincoln - 17/01/2021
The "Cloud Buster" was the fourth in series of beginners models. These were available as separate "Build-n-fly" kits or together as a set, per attached clip from the Comet catalogue of the day [pic 003]. I'm not sure of the date, probably the 1950s.
I received my Cloud Buster as a gift in 1966 on my twelfth birthday, and it was my first ever tissue covered model. Having built many plastic kits previously, mostly Aurora monsters and AMT cars, I had no trouble assembling the model and covering it with tissue. Problem was, we had a very small hobby shop in Peterborough, Ontario in those days, with a very limited selection of model airplane supplies. If you needed a plastic kit or slot car stuff (they had two magnificent tracks upstairs), no worries. But if you wanted clear dope - no luck!
Thus, I applied colour dope directly onto the dry tissue. It shrank the tissue a bit, but weighed a ton! In flight, the model was capable of no more than a very short powered glide, but otherwise well trimmed! Lessons were learned, and I went on to build many more models. And found some clear dope. The coloured dope was blue and white "Pactra Aero Gloss", and it was by no coincidence, the same as my Little Toot (oz3347) of same era!
I have no doubt the Cloud Buster flies well, and I'd like to build another some day ... and hold the colour dope. So many models, so little time!
ChrisMoes - 20/02/2021
Thanks Chris, OK am setting the date on this one to 1950 for now. If anyone out there can confirm the year it was first released, will re-set this.
SteveWMD - 20/02/2021
Ah, the Cloudbuster! I have fond memories of that plane. Like a lot of kids growing up in the sixties, I built plenty of Guillow’s planes but they were really designed more to fly off the hobby shop shelves that to fly through the air.
But the Comet Cloudbuster was a real flying model. Mine came with, as I recall, blue and white tissue, and I just used clear dope because that’s what the magazines always recommended. Man, did it fly well. It wasn’t just the design, but the plans included excellent trimming and flying instructions. I flew it for a while, then, after noticing that none of the contest planes in the magazines had langing gear, I clipped mine off. Big jump in performance.
Then about 25 years ago, in a futile attempt to interest my sons in model airplanes, I picked up 2 of the “4 in 1” sets. The box art did indeed swap the names of the Flyboy and Cloudbuster, but the plans were still the old Comet version with the planes still named as before.
That project didn’t get far- I think we got an HLG built but none of the rubber jobs. I did get a Flyboy built myself a few years ago, and started on a Cloudbuster fuselage, but that’s it. Might have to jump back in and build one. I still have 1-1/2 unbuilt Cloudbuster kits.
Regarding the year, I believe 1950 might be a stretch. One of my sets of plans, possibly from the plane I built as a kid, shows a 1964 copyright date. The plans that came with the sett aren’t dated but are later printing because they show Comet’s address with a 5 digit Zip code. The older set just says “Chicago 9”.
I’d be happy to scan the plans I have but really don’t know how to go about doing that. I assume I’d have to take them into an Office Depot or someplace like that? They obviously won’t fit on a regular home scanner.
Cheers, Dave
Kingbee - 02/03/2021
Add a comment