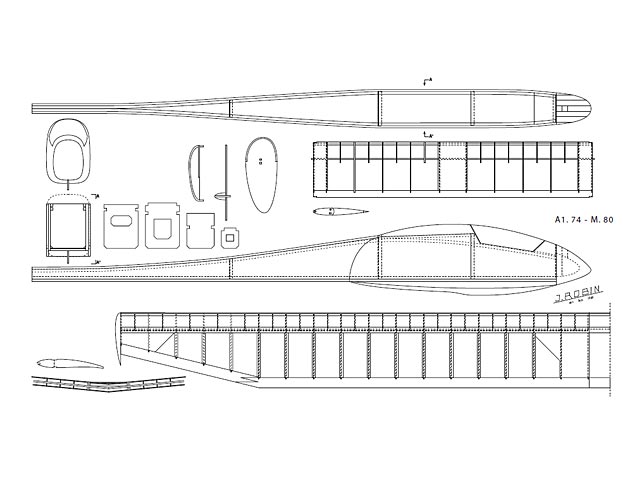 Quote: "Hello again Mr Outerzone! Thanks for publishing the previous plan I sent you, here is another one!
I would like to submit the attached plan, which I redrawn because of the poor original drawing condition.
This is a freeflight sports glider called A1, measuring 1.44m of wingspan and designed in september 1980 by an abbot called Jean ROBIN. Jean Robin (who has now passed away) was running a model aircraft club in Paris, located Rue Madame in the Bossuet college. This club was affiliated to the French model aircraft association (FFAM) and I was part of this club in the 80's, when I was 10 years old or so.
This glider was my second one, and it was made mainly from hard wood and balsa (the wing and stabilizer were covered with silk and dope).
I hope you will accept to publish this plan and that I will be able to translate the above comments in French later on.
Best regards,

This plan seems to be incomplete; it is missing details & images for both the horizontal and vertical tail sections and stabilizers. Is there another sheet of the plan set for this?
Tom Myers - 16/01/2021
No, I think this is complete. The horiz stab is clearly shown, and there is no central fin/rudder, just a pair of tail fins, a similar style design to say the Tulak (oz12741) layout. Agreed, it would be nice if we had a photo of the actual model, to add clarity.
SteveWMD - 16/01/2021
Thank you for the clarification regarding the tail planes.
Tom Myers - 19/01/2021
Add a comment